Enjoy this James Buchanan poem, Time Past for Debate, by Denise Rodgers. 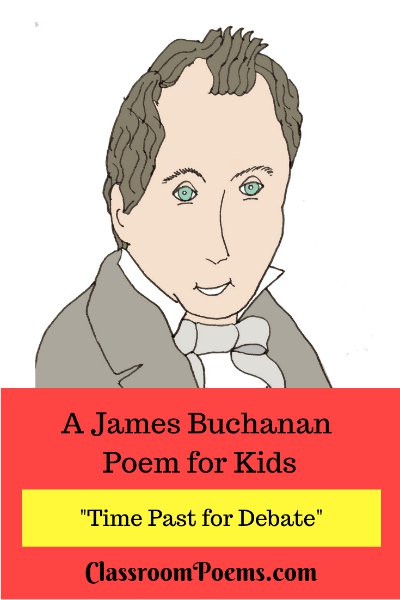 Time Past for Debate
(A President James Buchanan Poem)

He claimed that slavery was a right
As president, he would not fight.
The highest court said, "That's all right.
It's up to every state."

The South was happy, that is true.
Buchanan did not have a clue.
The Union soon would be quite through,
The time past for debate.

The anti-slavery folks were mad.
The Northern states felt they'd been had.
The situation grew quite bad
And sealed the nation's fate.

The Union's strength was soon impeded.
Seven Southern states seceded.
Real strong action sure was needed.
But it was too late.

15th President of the United States

Facts About the James Buchanan Poem

Two days after James Buchanan's inauguration, the Supreme Court delivered the Dred Scott decision, saying that Congress had no right to deny slave ownership in the territories. As new states joined the Union, the North wanted them to be free states, and the South wanted to expand slavery. By the time President Buchanan left office, seven Southern states had seceded from the Union and the nation was on the brink of Civil War.

* James Buchanan was born to a wealthy Pennsylvanian farm family in 1791. He graduated Dickinson College, and was known as a gifted debater.

* Buchanan was elected five times to the House of Representatives.

* Buchanan was Minister to Russia during the Andrew Jackson administration.

* He served for ten years in the United States Senate.

* Buchanan was Secretary of State under President Polk.

* He served as Minister to Great Britain during the Franklin Pierce administration.

* Buchanan was nominated as a presidential candidate in 1856, as he was a safe choice during the bitter political climate of the time. Because he'd spent so much time abroad, he had not made his views of the North-South, Free State-Slavery State split.

* As President, Buchanan denied the legal right of states to secede, but felt there was no legal action the Federal government could take. He preferred compromise, even as Southern States began seceding from the Union.

If you enjoyed these James Buchanan facts and the the President James Buchanan poem, please go to our US President List page for links to more of the same. More more information about President Buchanan, go to WhiteHouse.gov.