How to Write a
Diamante Poem

This page will explain how to write a Diamante Poem. The Diamante was created by poet Iris Tiedt in 1969, when I was 14 years old (and already starting to write poetry of my own). It is named for the diamond in that it looks diamond-shaped on the page because of its construction. The diamante is written (and shaped) as follows: 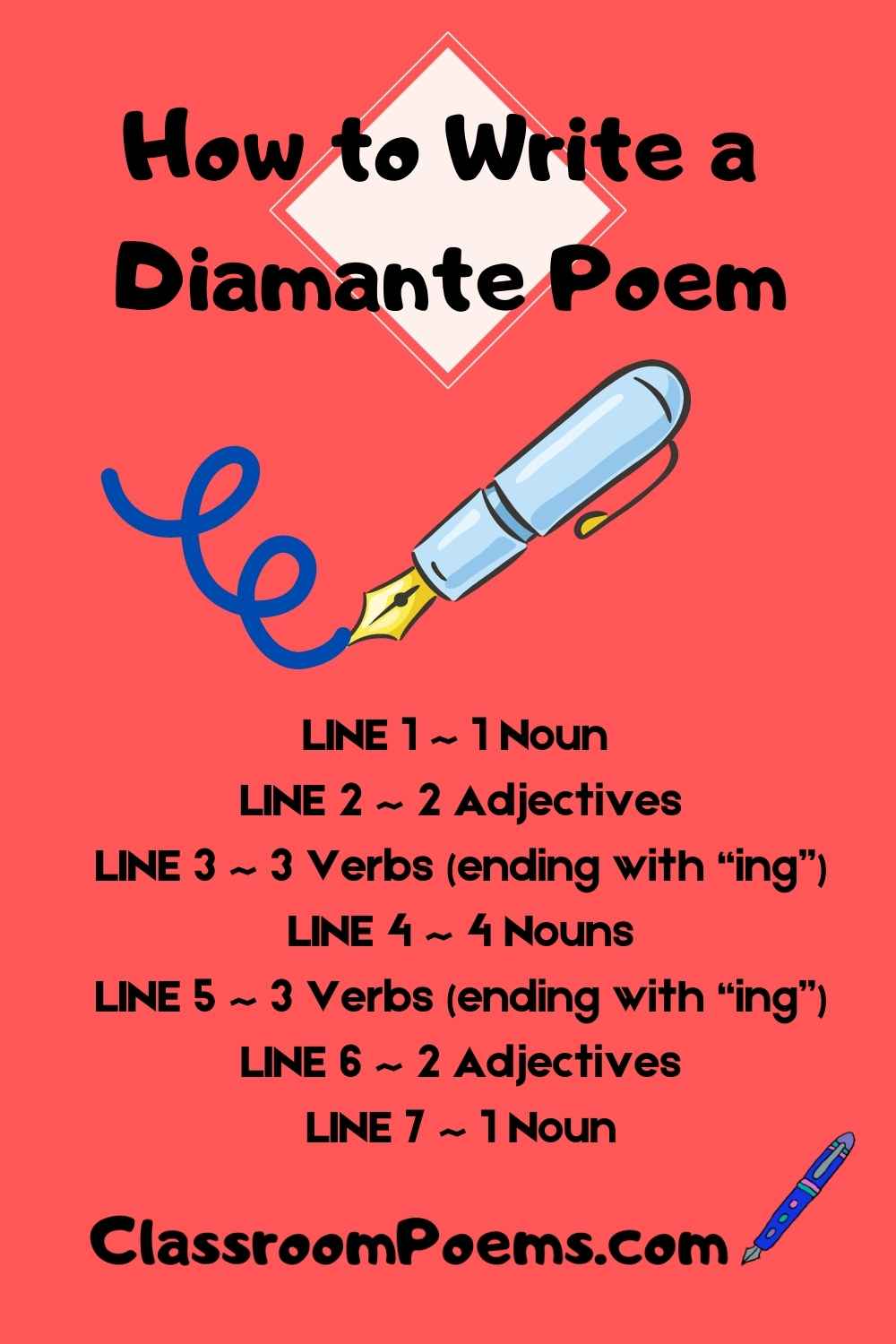 How to Write a Diamante Poem ~ Synonym Diamante 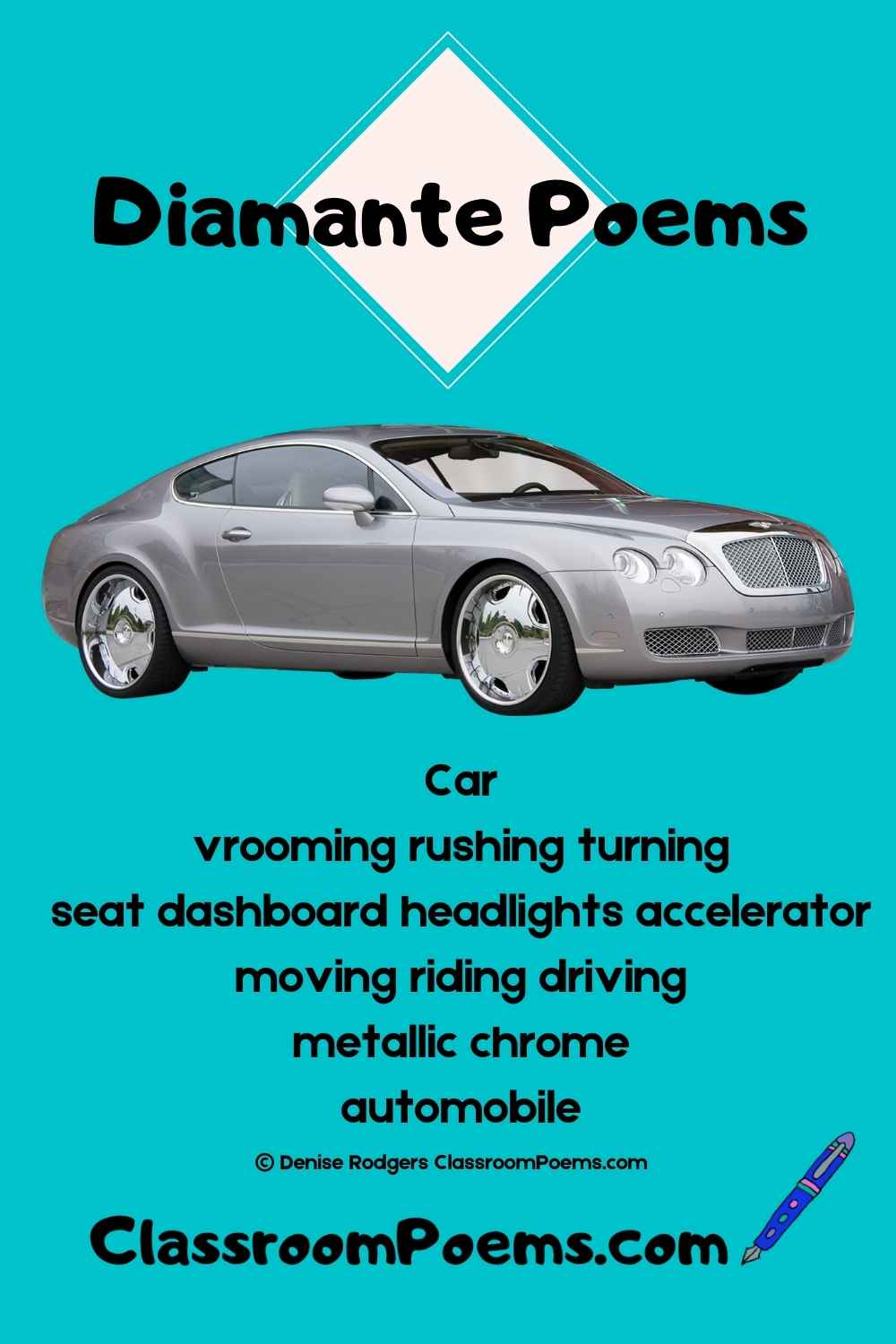 The first synonym diamante poem was about an automobile. A synonym for automobile is the word car.  An automobile and a car are one and the same. The second synonym diamante poem is about house pets, specifically about dogs and cats. They are similar, but not identical. Notice the shift from the description of cats to dogs as we approach line #4 with the four nouns. After these four nouns, which can apply to either cat or dog, the descriptions, or words, are all about the dog. 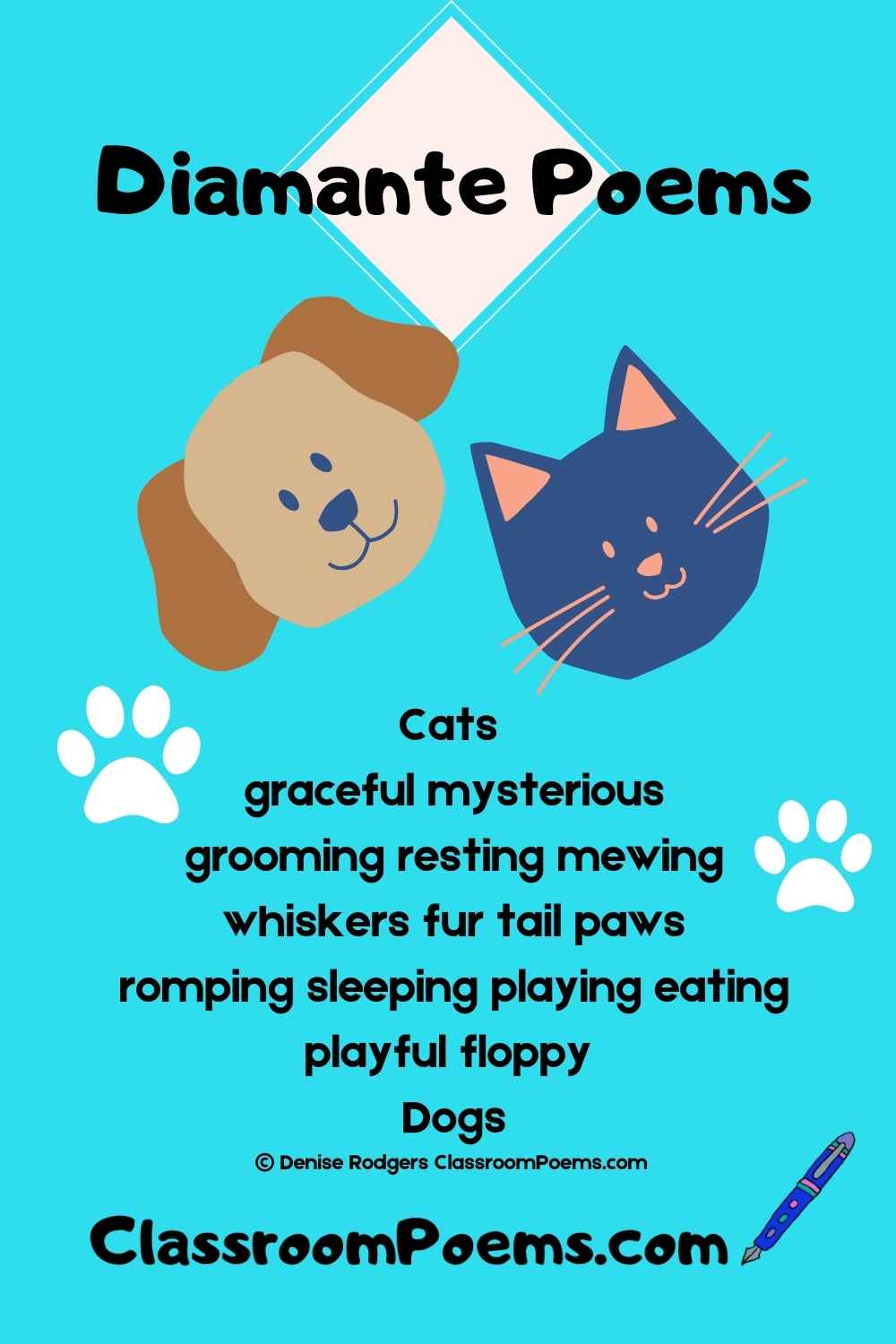 How to Write a Diamante Poem ~ Antonym Diamante

The following two diamante poems are written about antonyms, or opposite topics. Once again, take note of how the tone of the poem changes in line four, the line that contains four nouns. After the shift from City to Country (and from Diamante to Couplet in the second poem), the rest of the poem is about the second topic. 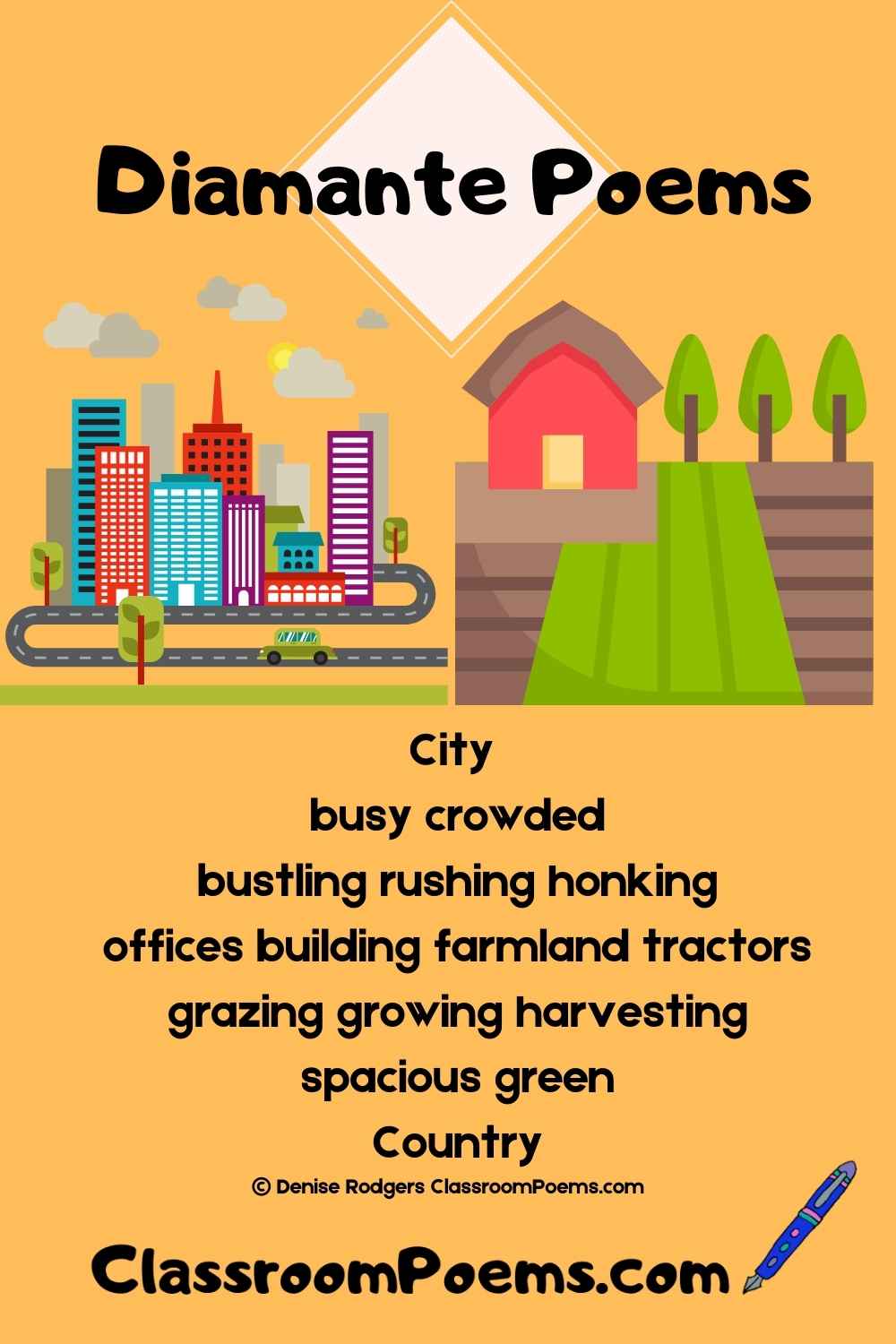 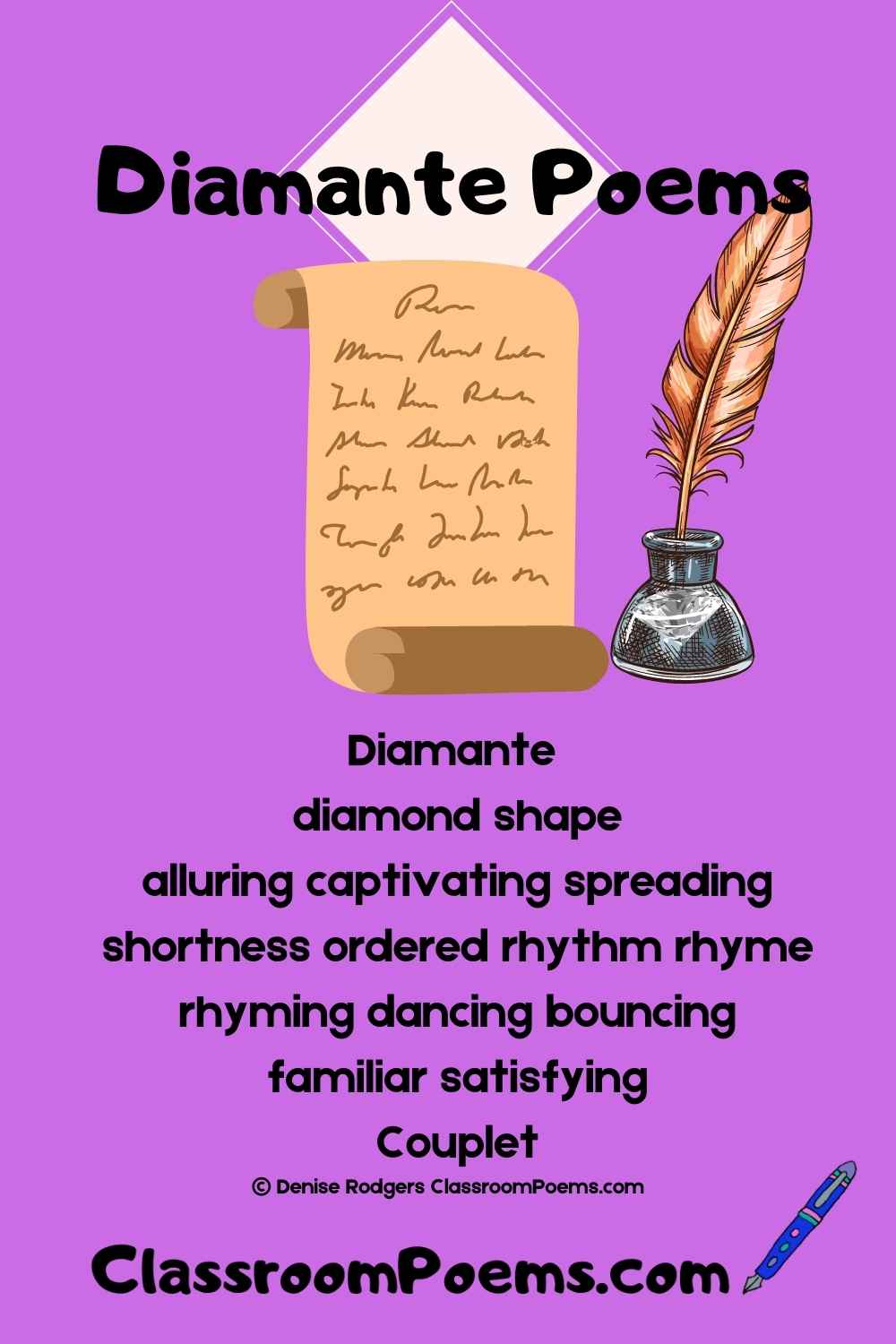 Now that you know the secret for creating a Diamante poem, try your hand at writing one for yourself. Choose a topic and think of synonyms and antonyms for your topic. In other words, think of another topic that is either similar or opposite to your original topic. Brainstorm the words that go with your two topics, making sure that you are collecting nouns, adjectives, and verbs that end in “ing.” Put them all together and I guarantee that you will write a satisfying Diamante poem!

If you’re happy with your poem or poems, and would like to share them with the world, consider posting them on this site. Go to PUBLISH KIDS’ POEMS here and send your very best work over.