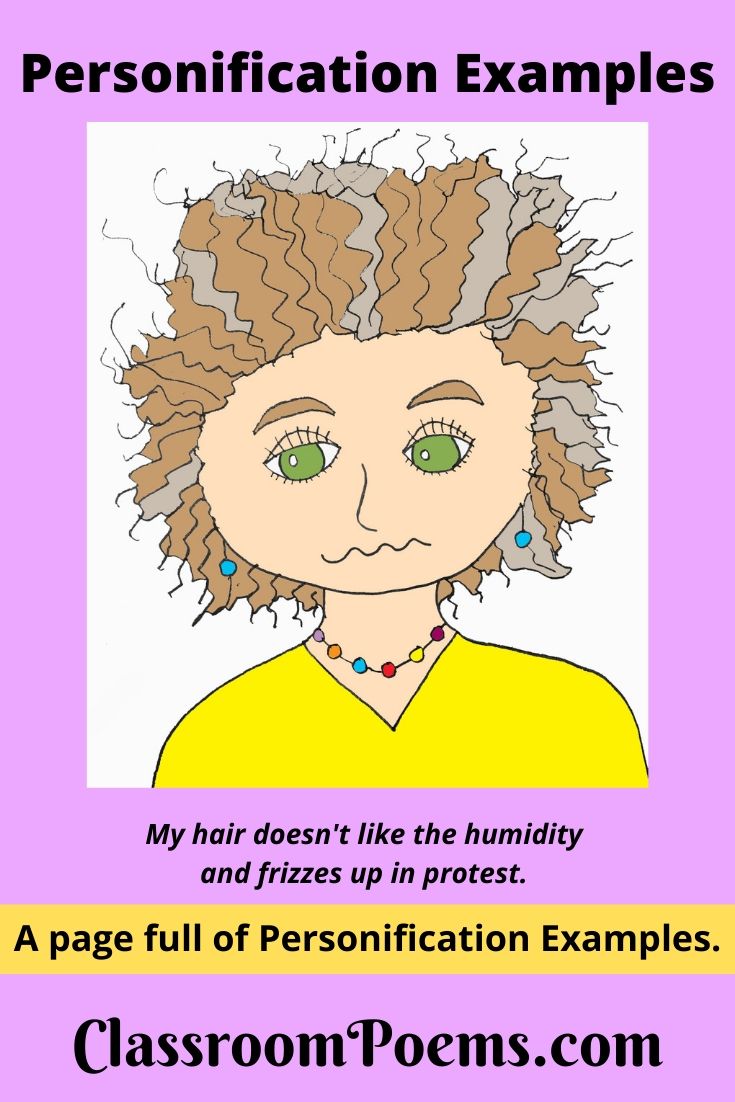 Before we get to the personification examples, let's talk about personification itself. Personification is the literary device of giving human qualities to an inanimate object or other non-human things. Not only do people often talk this way, it is a colorful device to make your writing come to life.

This first round of personification examples use subjects found in nature, including body parts, as you will see in the first example.

My hair doesn't like the humidity and frizzes up in protest.
This is my personal truth. My hair DOES frizz up when it's humid out. However, my hair has no ability to protest. That is a human characteristic. I could protest, but my hair...is just hair. (See the illustration above for this sad story.)

The sunlight kissed the earth with warmth.
Now this paints such a vivid picture that you might think this is a metaphor. However, giving the human ability of kissing to the sunlight is a perfect example of personification.

The waves danced in the sunlight.
You probably know exactly what this means. When sunlight shines over moving water, it appears to shimmer and dance. However, this is a human trait used to describe a body of water, not a human. It's personification.

The wind told me it was time to change direction.
Yes, we can decide which way to steer a sailboat, or even in which way to walk when the wind is getting stronger. However, the wind does not "tell" anyone anything. Only another person (human) could do that.

The storm clouds gathered on the horizon, threatening us with the promise of torrential rain.
Clouds can gather, or appear to show up in groups, but they can't threaten anyone. A human might feel threateend by the storm clouds, but the clouds are only clouds. They don't apologize either, if you get soaked in the rain.

The light through my bedroom curtains promised a beautiful day.
Okay, the light is light. It doesn't make promises. It might look promising to a human, but the sunlight just is. It's human interpretation that produces a promise. It's colorful. It's personification. 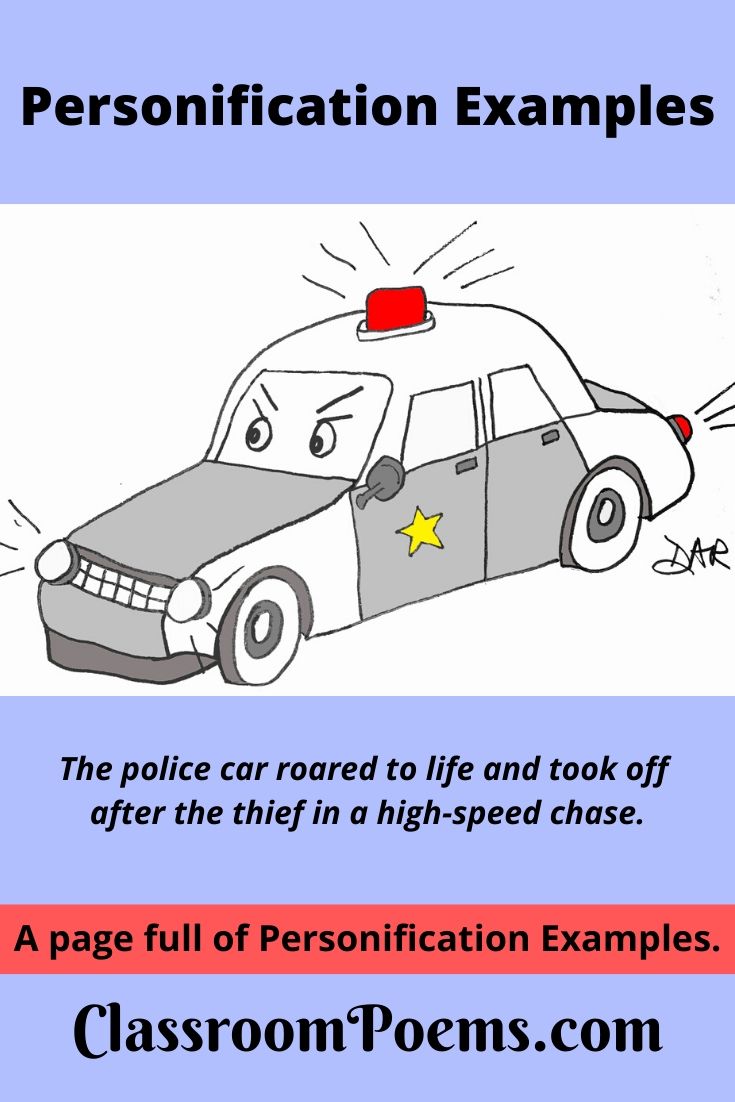 The personification examples below all give human qualities to inanimate objects, giving color and life (literally) to the description.

The police car roared to life and took off after the thief in a high-speed chase.
Cars don't roar. And unless there is a driver behind the wheel, they don't take off on a chase. While the noise a car makes might sound like a roar, it is not a roar. This is an example of personification. (Please see the illustration above.)

My phone shrieked with anger when Angie called.
Unless a human puts a shriek sound on their cell phone ringer, a phone does not shriek. Humans, and maybe some animals, shriek. Beyond that, a phone most certainly does not get angry, whether Angie calls, or ever, for that matter. A phone just is just a phone. This is another example of personification.

The tea kettle whistled at me when the water came to boil.
Okay, this one is tricky because tea kettles do whistle when water comes to boil. However, a kettle does NOT whistle at a person. It merely makes a noise. Humans whistle to get another person's attention. This is an example of personification.

The door squeaked in protest when it was opened five years later.
This example is similar to the one just above. Doors do squeak when the hinges get kind of creaky. But they do not protest. They just squeak. Protesting is for humans. This is an example of personification.

The printer spat out three sheets of paper.
Computer printers do not spit. There is no saliva involved. The way paper shoots out of a printer can resemble a person spitting. This is an example of personification.

The lottery was his best friend.
This is kind of sad, but that's not the point. The lottery isn't a touchable inanimate object, but it certainly is not a human being. It cannot be someone's best friend. Referring to the lottery this way is an example of personification.

My list sat there, mocking me, making me wish I hadn't made all those promises.
It sounds like someone is overwhelmed with tasks. However, a list just can't mock anyone; it can make a person feel mocked, and that is the point of this personification example.