Any poem about Noah's Ark is the ultimate choice of animal poems. Check out this poem, below, as well as our page of wild animal poems,  zoo animal poems and poems about our pets. 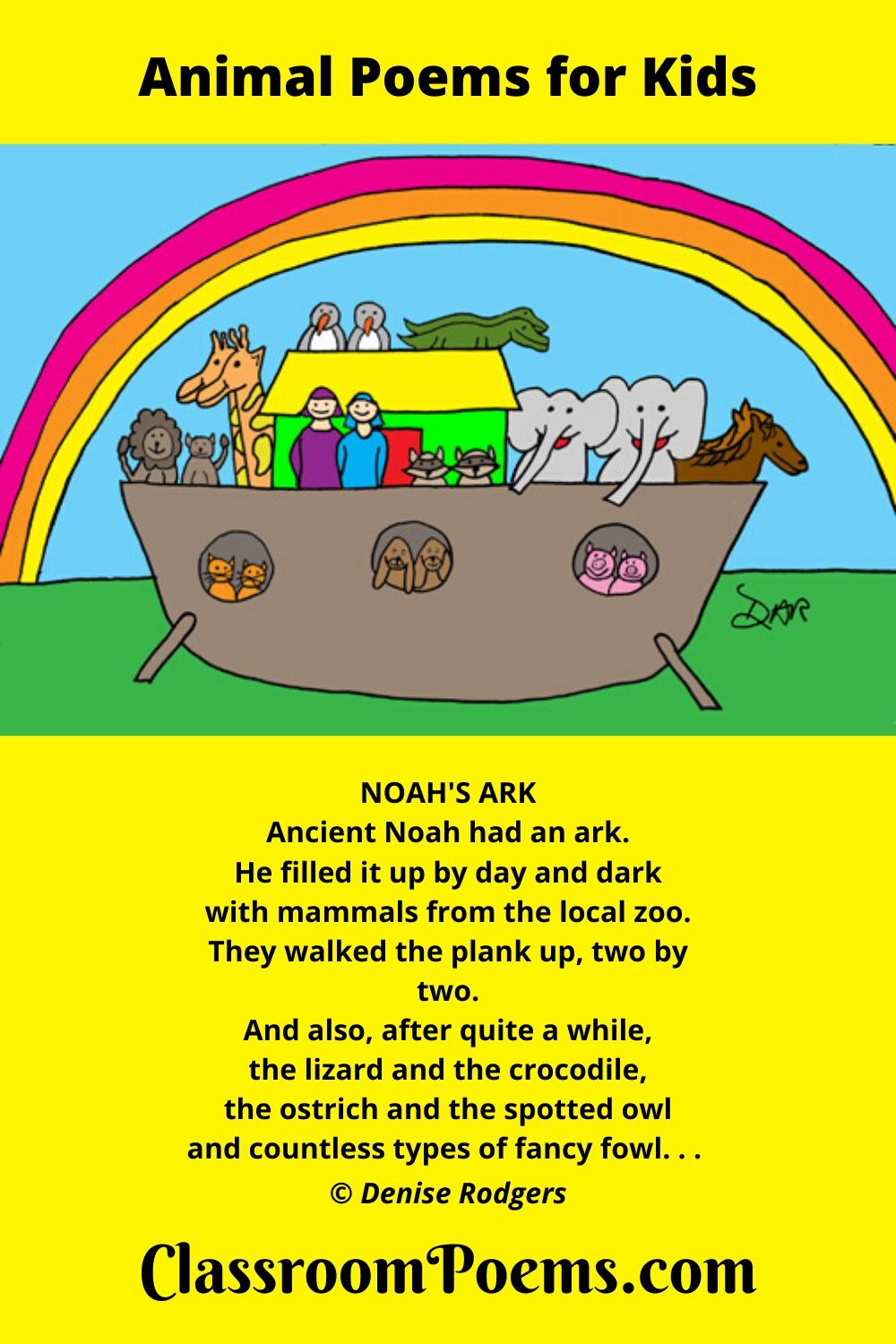 NOAH'S ARK
Ancient Noah had an ark.
He filled it up by day and dark
with mammals from the local zoo.
They walked the plank up, two by two.

And also, after quite a while,
the lizard and the crocodile,
the ostrich and the spotted owl
and countless types of fancy fowl.

Too bad he also packed some worms,
some flies, some spiders and some germs,
some poison snakes and biting gnats,
(but also friendly dogs and cats).

"Hark, come aboard." He used that phrase
as people talked weird in those days.
(Though far as scholars can distinguish,
we're sure that he did not speak English.)

There is one fact that I abhor:
he did not pack one dinosaur
or tiger with a saber tooth.
He plain forgot, that is the truth.

Click on the picture below for another page of funny Animal poems. These poems are universally popular, not just with children, but with adults as well. Check out these poems about the zebra, the electric eel, the duck-billed platypus, and even about the rare (and extinct!) Dodo Bird. 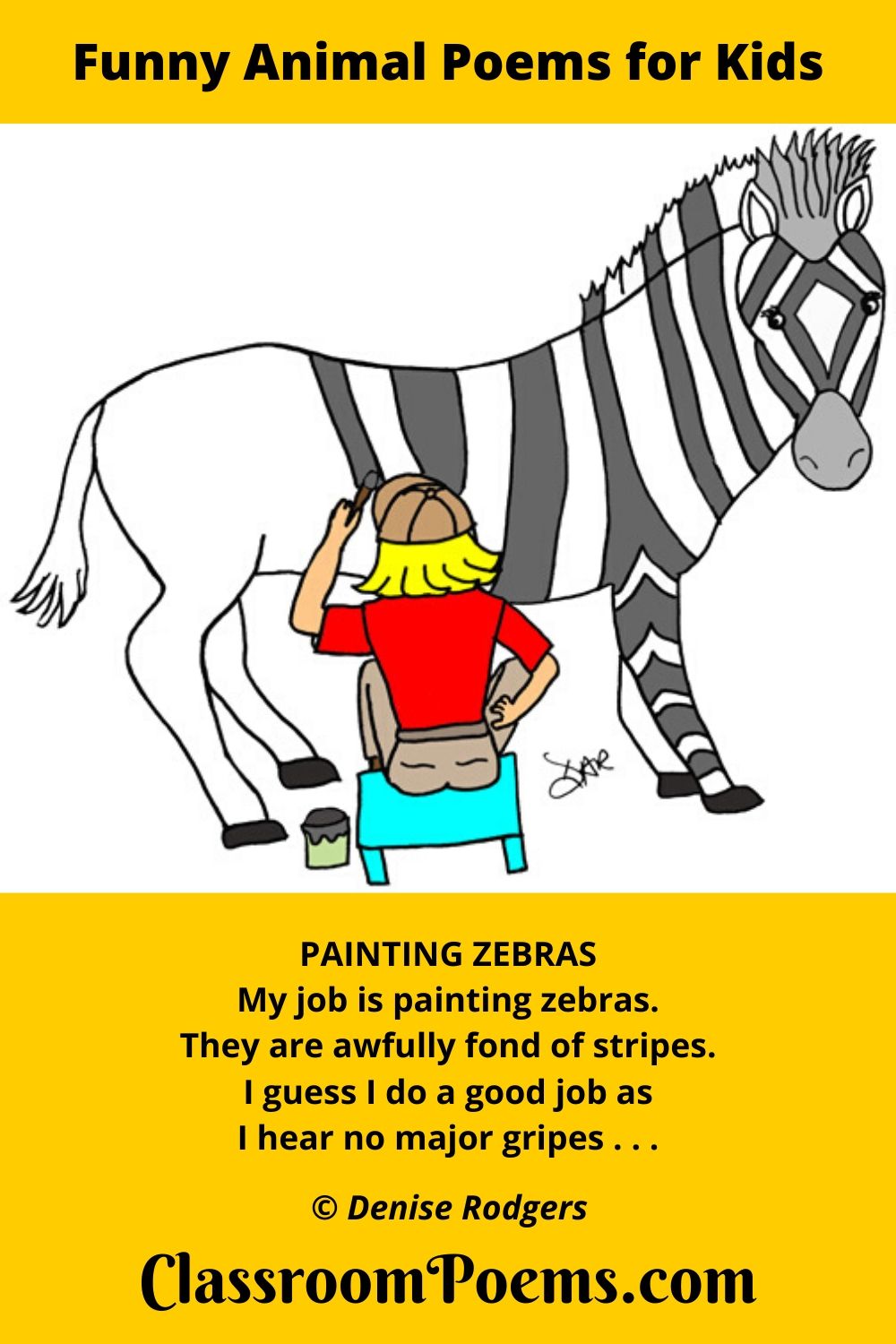 Click on the picture above or go to funny pet poems to see a page of poems for kids about dogs, cats, and... beans? Go ahead and take a peek. You won't be disappointed. 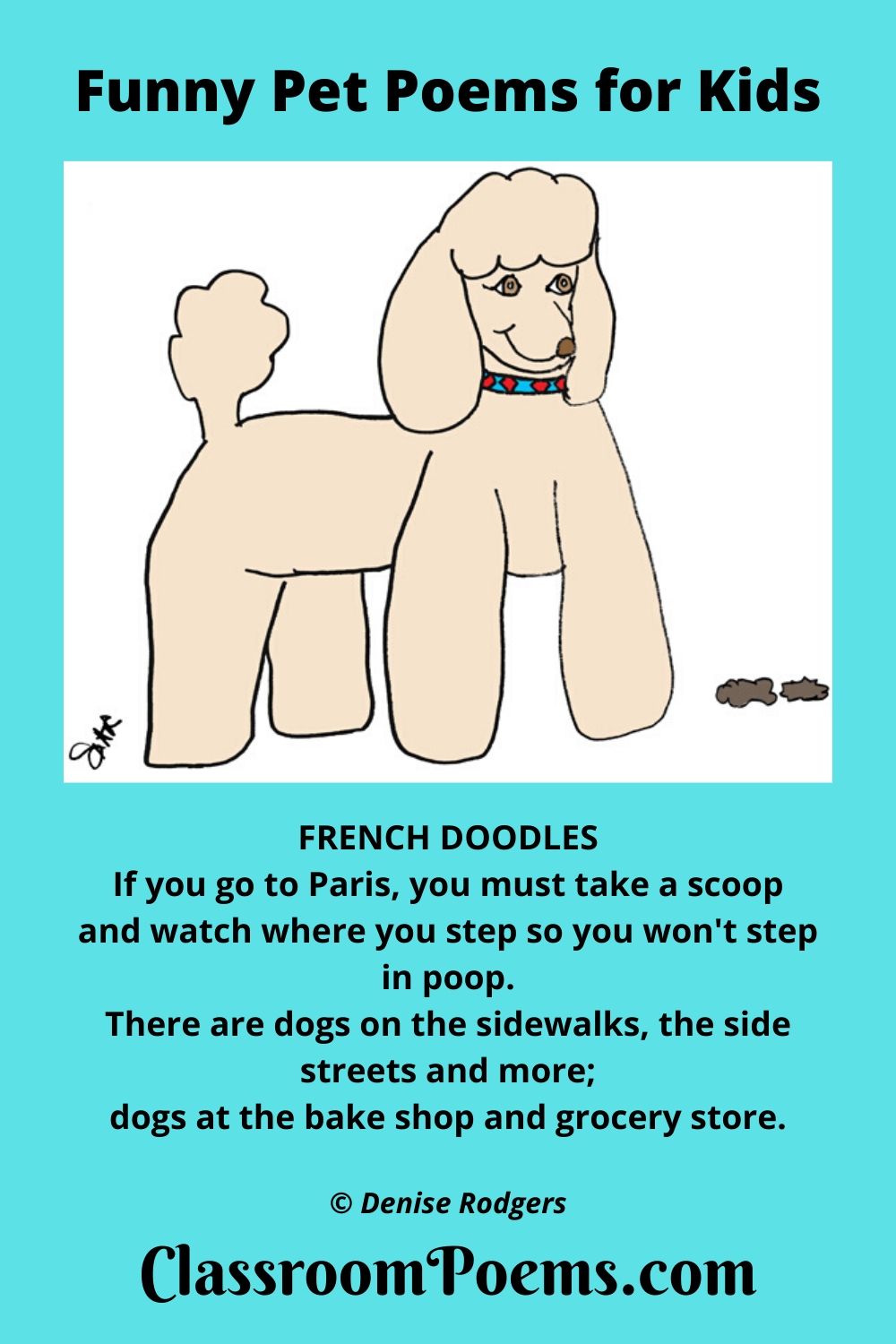 For a page of funny dog poems guaranteed to tickle your funny bone, click on the picture below . Read about the dog and pony show, a dog show, a gourmet canine, and much, much more. 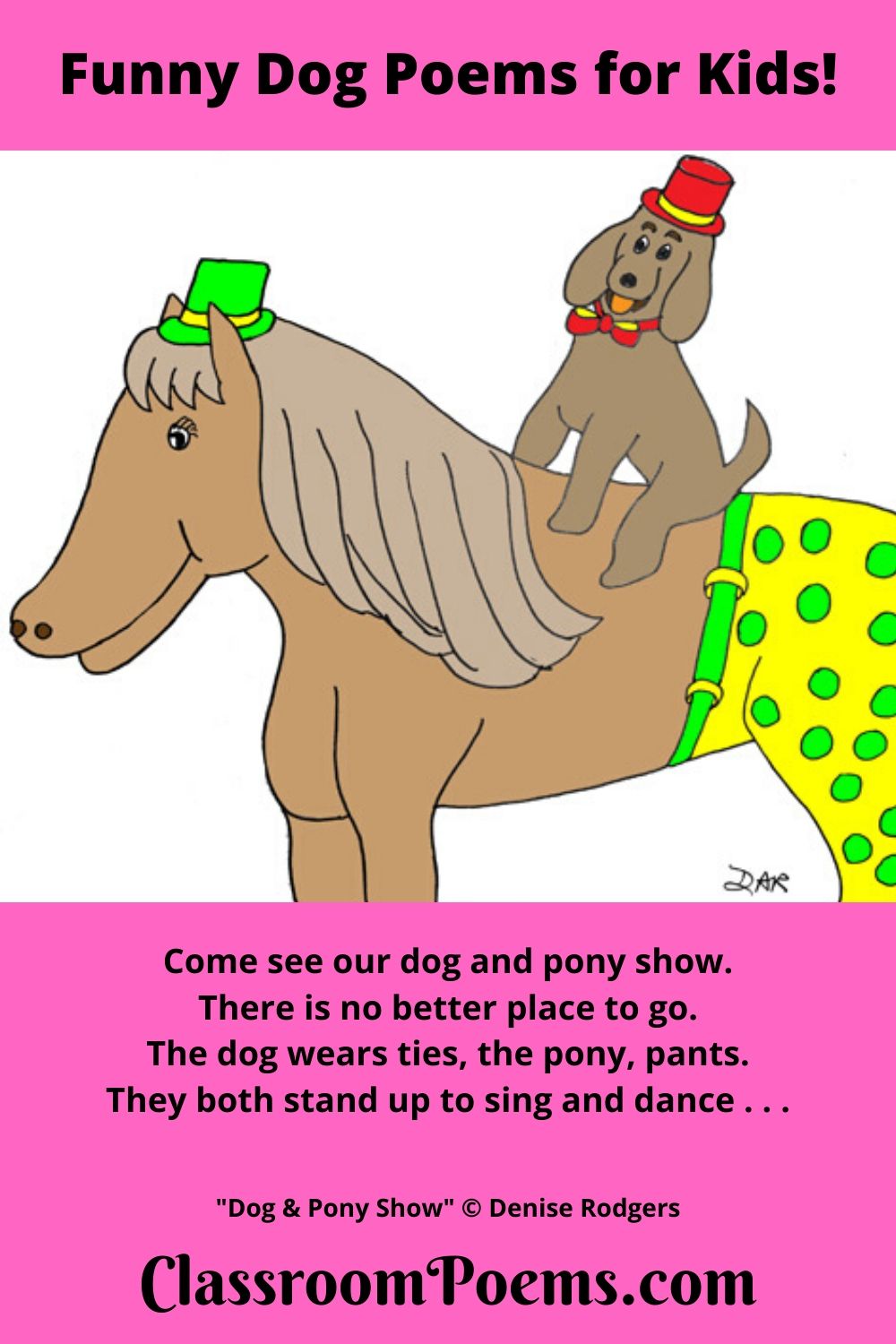 Check out these funny zoo poems by clicking on the pictures below. See a penguin poem, an elephant poem, and a hippo poem. It's the next best thing to getting in your car and going to the zoo! 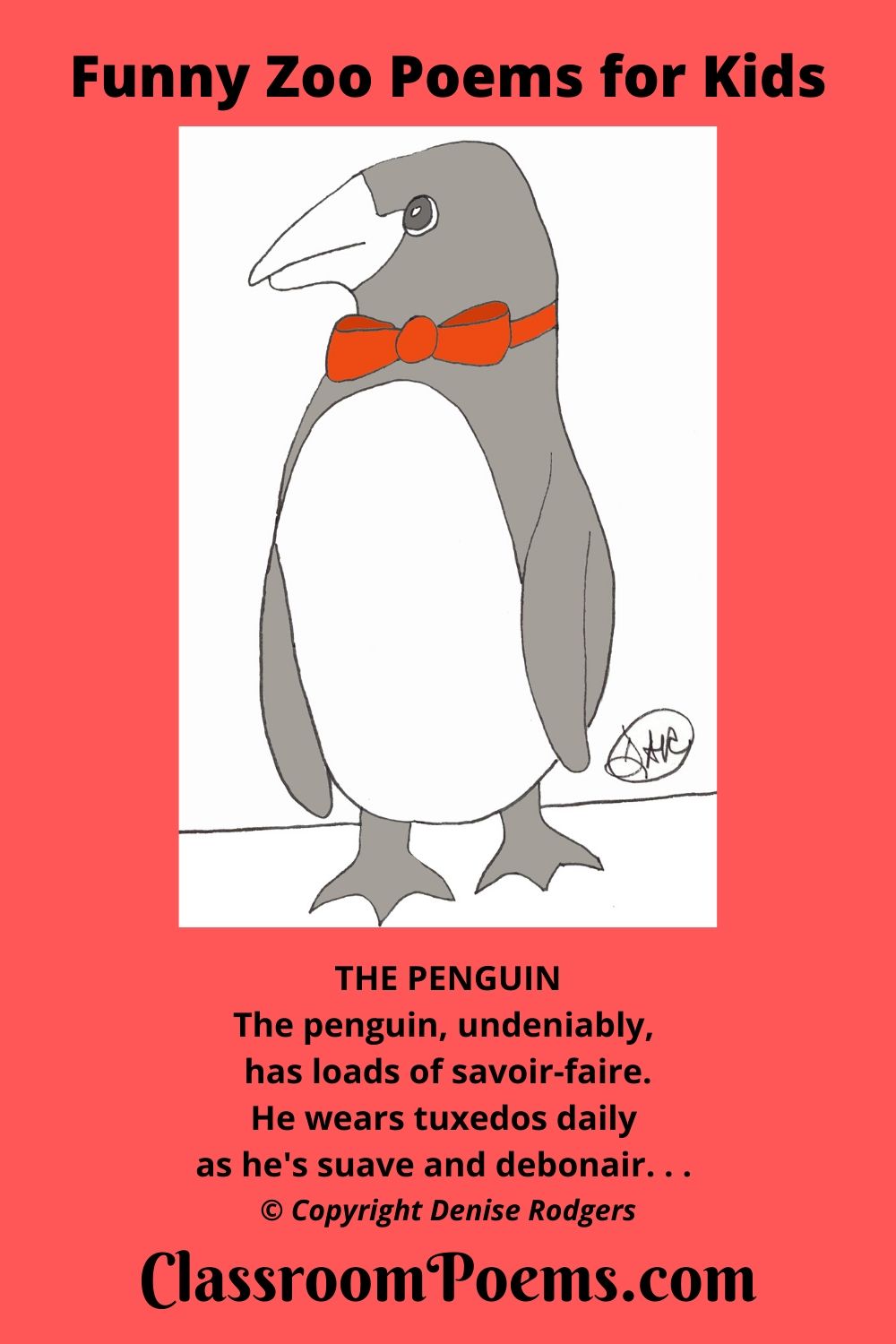