There are specific Haiku rules for poets. Like all rules, it is good to know them, to learn them and practice them. Then when you know what you're doing, it is acceptable to break them. Haiku poems originated in Japan. Here, very briefly, are the rules that make up this poetic form. 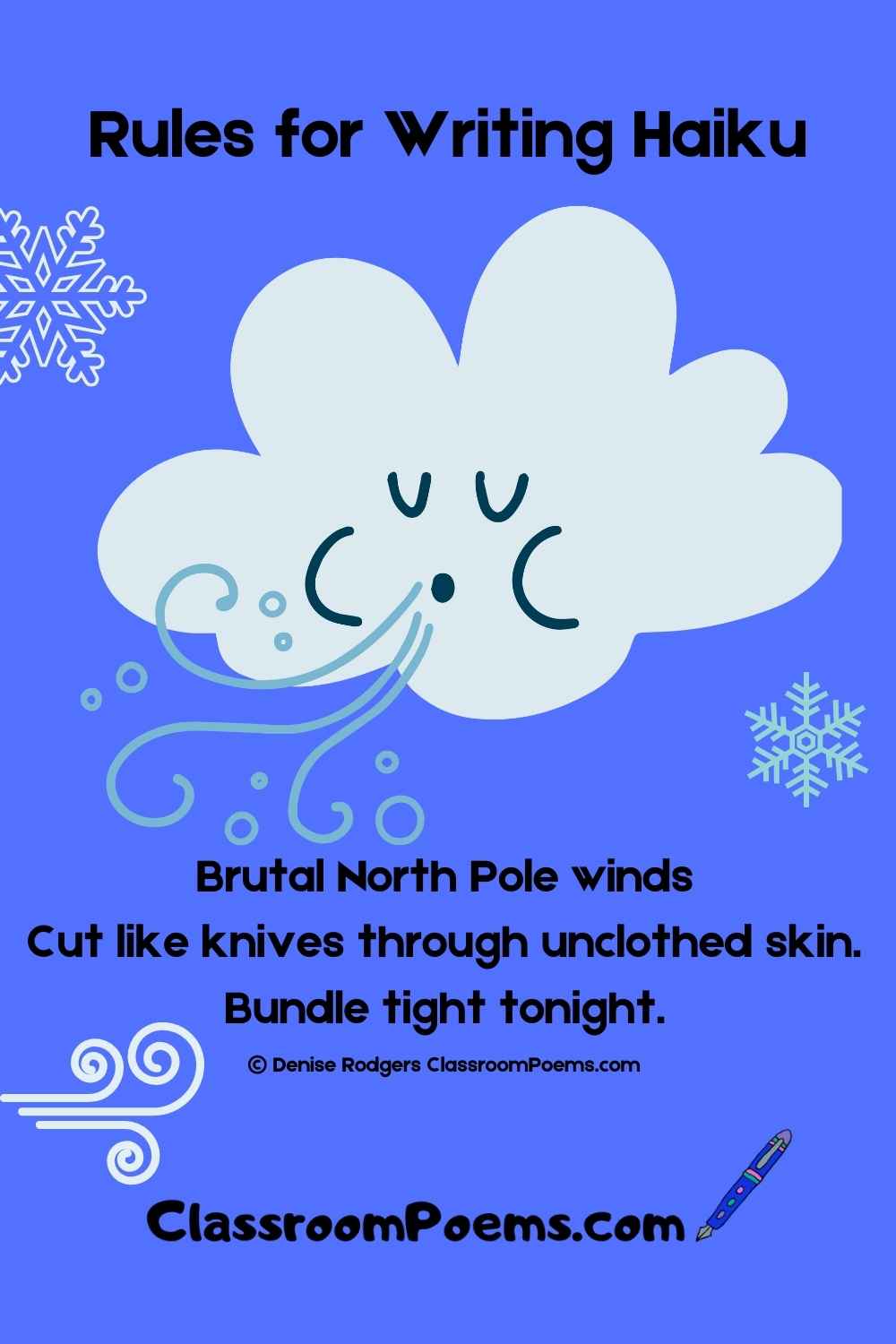 Here is a haiku example: 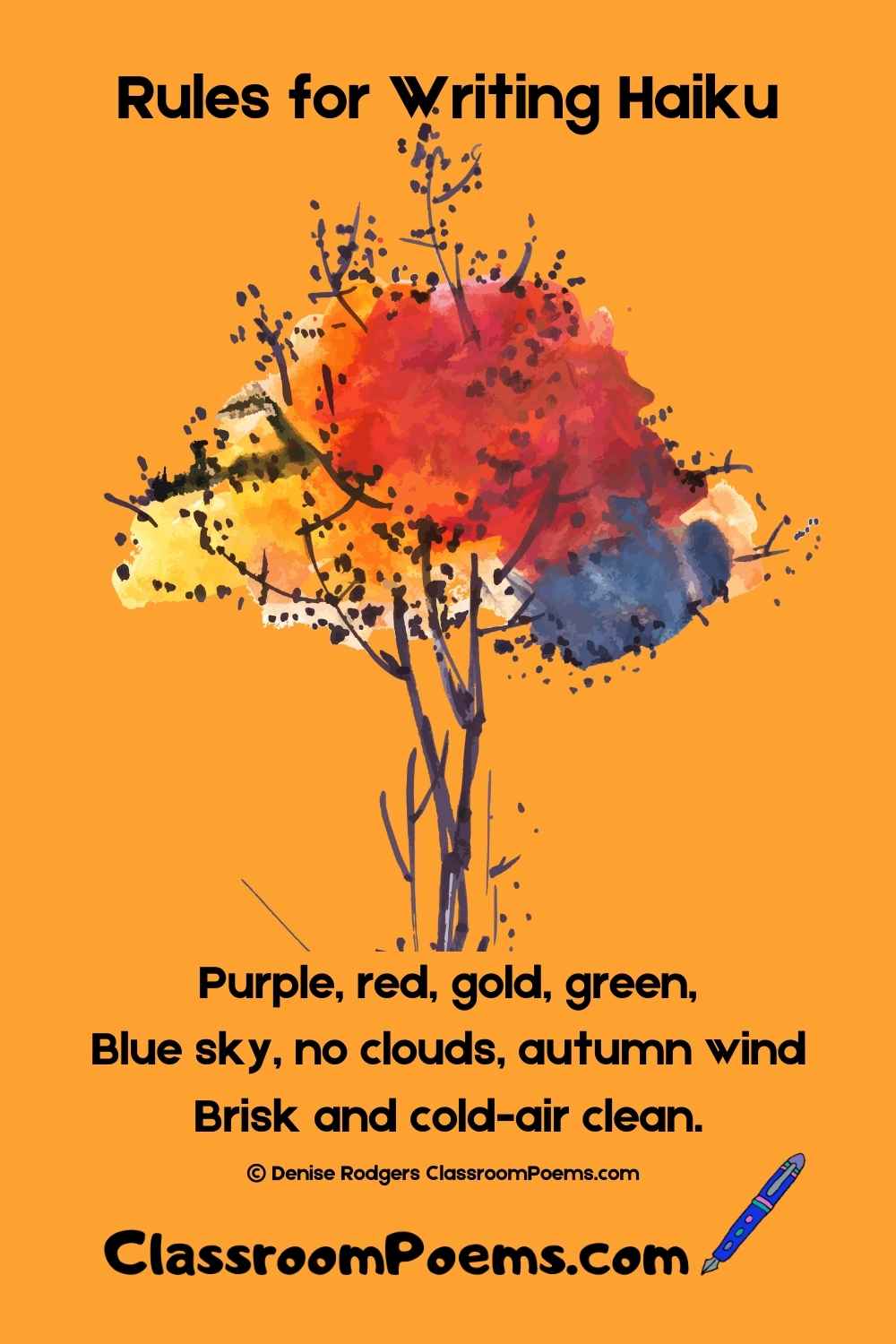 Haiku Rule #2: The subject of a haiku should be either related to the seasons or something in nature. There is a bit of variation to this rule, and a little more wiggle room than in haiku rule #1. Here is another haiku example: 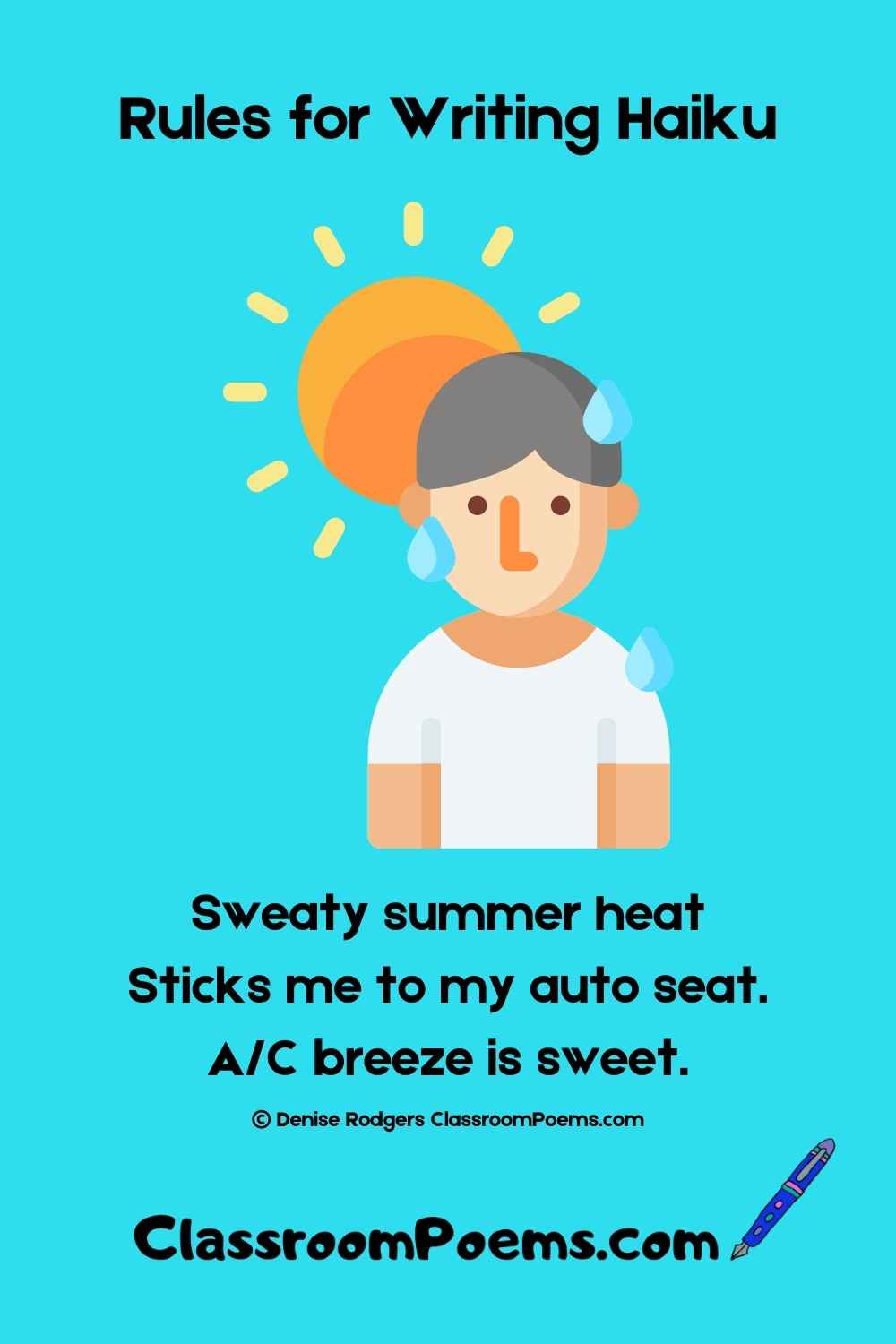 Haiku Rule #3: Be specific. This means -- write about one thing. You're limited to three lines and seventeen syllables, so if you try to pack in too much, you will have less effect. This is also true of most poetry.

Here is an example of a summer haiku:

Sweaty summer heat
Sticks me to my auto seat.
A/C breeze is sweet.

Now one of the rules of haiku is that is it NOT supposed to rhyme. That said, if the rhyme works, I go with it. If it doesn't, I don't. 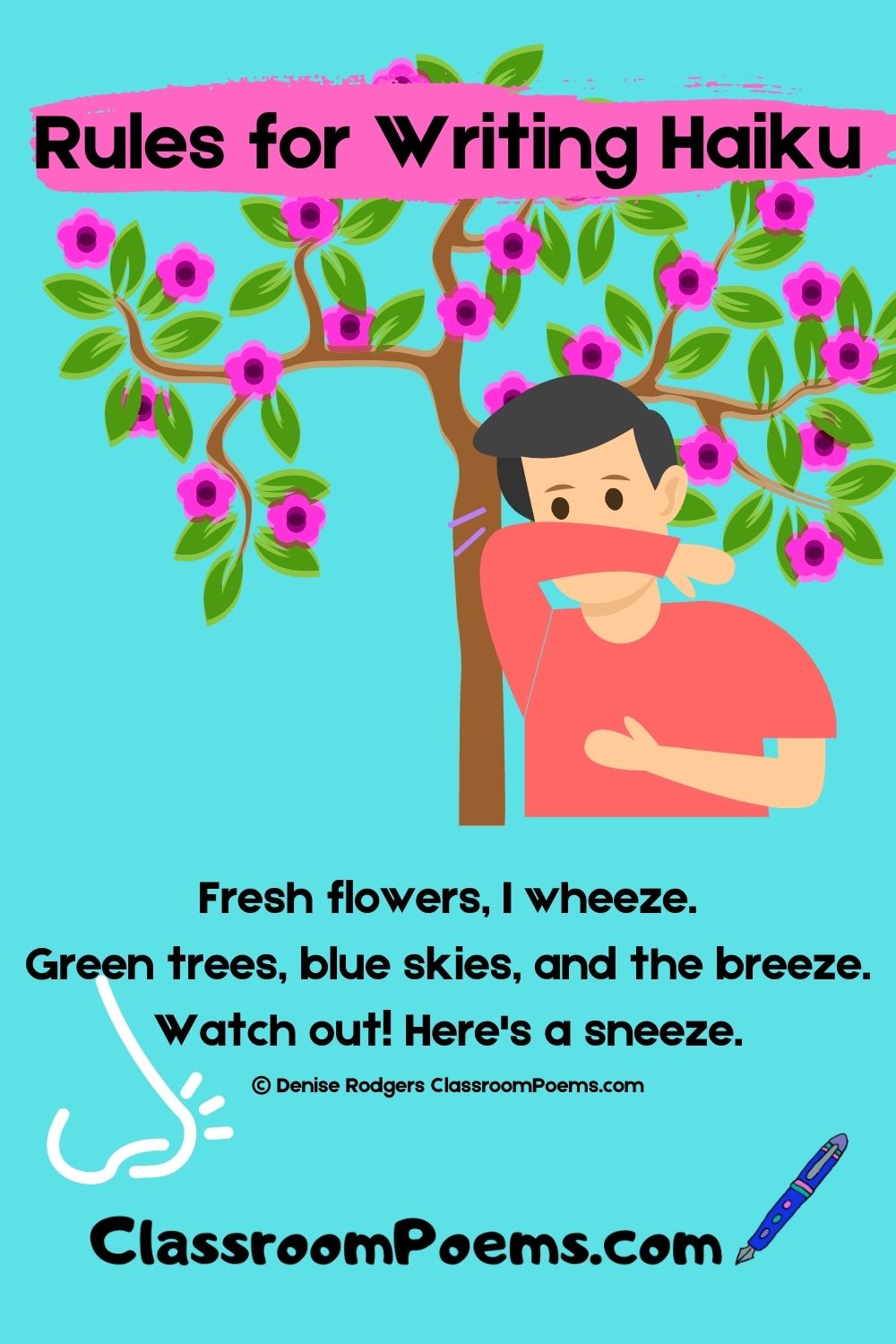 Fresh flowers, I wheeze.
Green trees, blue skies, and the breeze.
Watch out! Here's a sneeze. 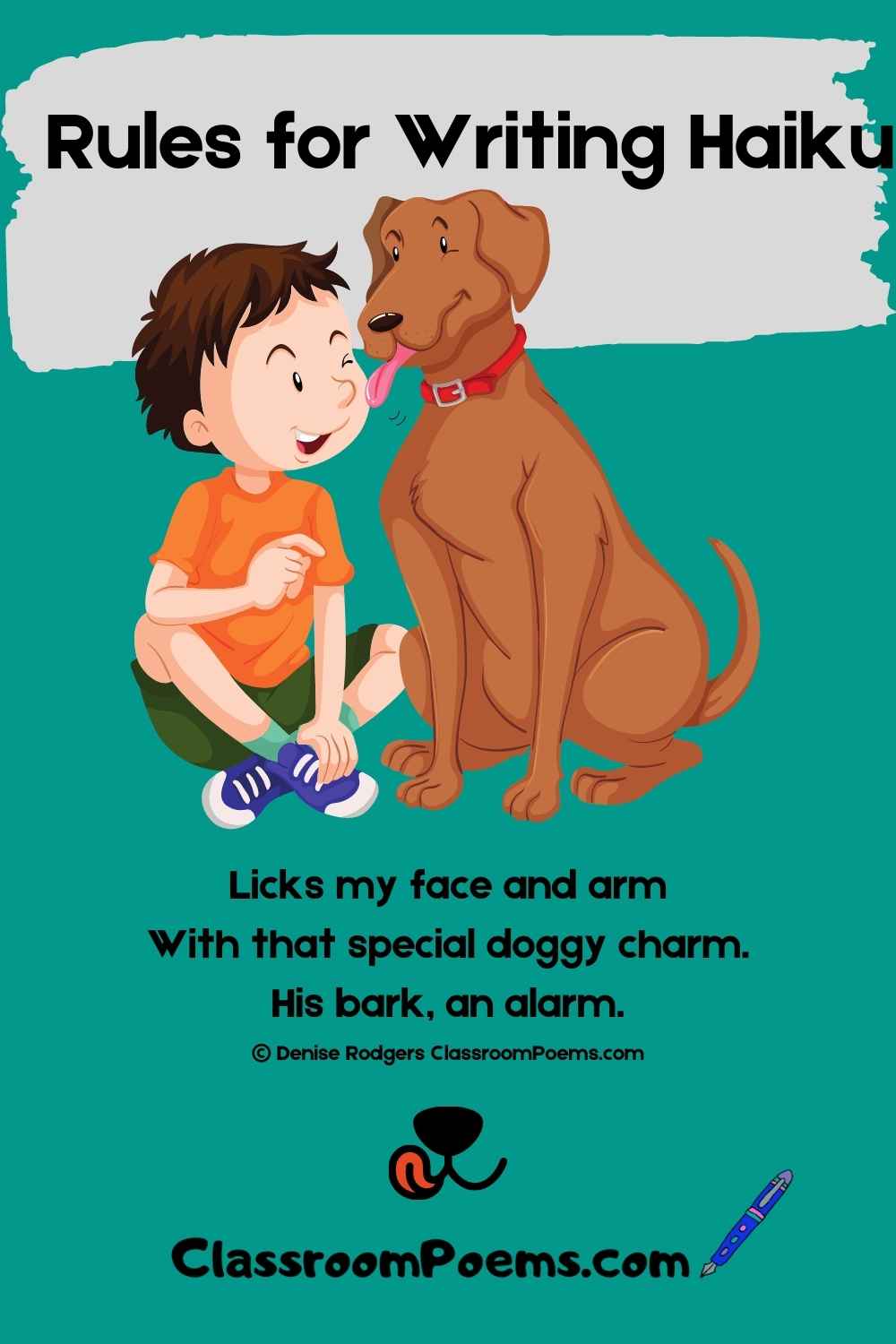 Haiku Rule #5: No word repetition allowed here. You're dealing with seventeen whole syllables, so this shouldn't be much of a challenge, even though repetition is fun and generally a good poetic devise. This is one rule that I'm personally itching to break. Notice the lack of repetition, however, in the following haiku example:

Licks my face and arm
With that special doggy charm.
His bark, an alarm. 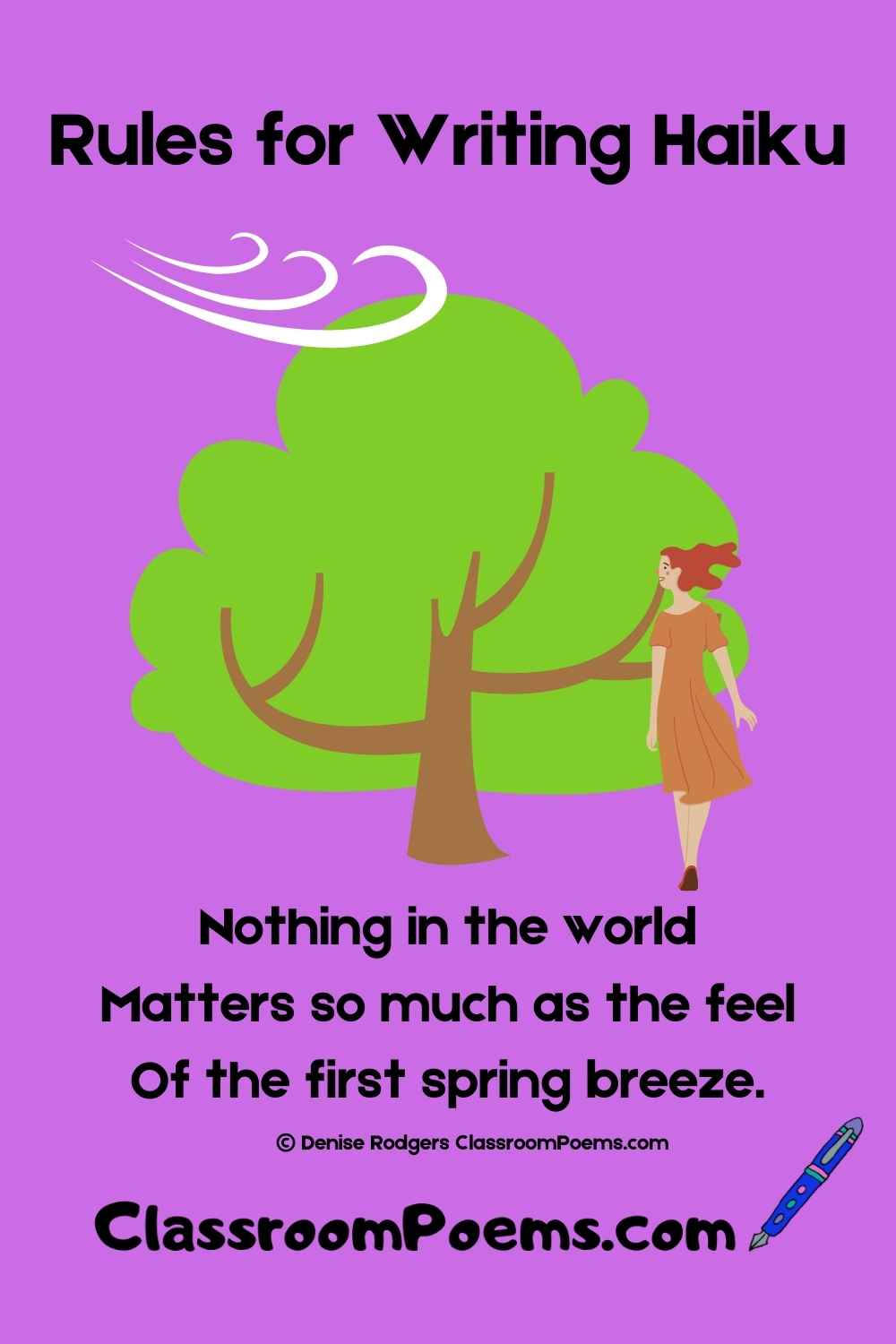 Rule #6 Haiku poems do NOT rhyme. Now I'm starting to sweat. Personally I love rhyming haiku and I've created many to illustrate this point. That said, a formal, true, authentic haiku does not employ rhyme - either end-rhyme or internal. Here is yet another haiku example.

Nothing in the world
Matters so much as the feel
Of the first spring breeze. 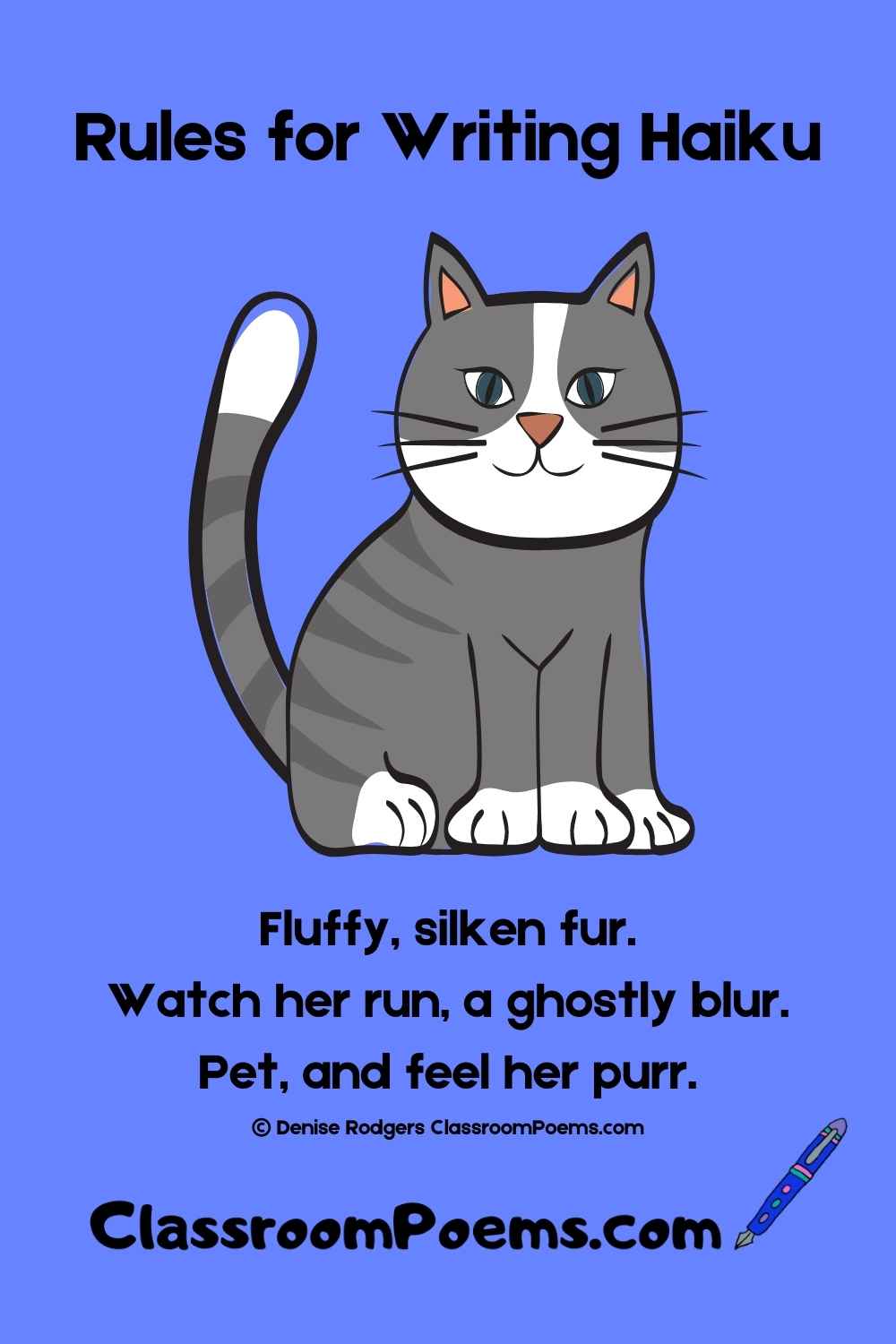 Haiku Rule #7 is the pause in the poem that makes traditional haiku gasp, with pleasure or recognition (or both). Why should haiku be different than another other type of poetry? Here is yet one more example of haiku:

Okay, you caught me. I rhymed! But other than the rhyme, the haiku above captures the essence of haiku. It has three lines of seventeen syllables, 5-7-5. It is about an animal, making it about nature. It is written in the present tense. No words repeat. And there is a pause in the last line. I'll leave it to you to decide if it actually "gasps." If you think you can do better, perfect. Write your own, and if you like, please send it to me. I'd be delighted to hear from you.

How to Write a Haiku