Check out this personification poem video...

Personification poems use the literary device of giving human characteristics to a non-human, or even inanimate objects. It's similar to metaphor, in that it describes something by comparing it to something else, but it is more specific.

Here is the text of the first personification poem.

IF DOGS COULD TALK
If dogs could talk, what they would say
would simply take your breath away.
Like: I don't want to see your knees.
Or: Pass a bit of roast beef, please.
When dawning sun shines in the east
they'd say: It's time for morning's feast.
When silent, still and somewhat broodish,
their minds are simply on your food dish.

Some might speak with British accent,
sniffing one another's back scent.
Some might lisp and some might stammer,
some would have atrocious grammar.
Some would chitchat, some would twaddle.
Some would rush and some would dawdle.
Curling on your soft bed nightly,
most would say: Good night,
politely. 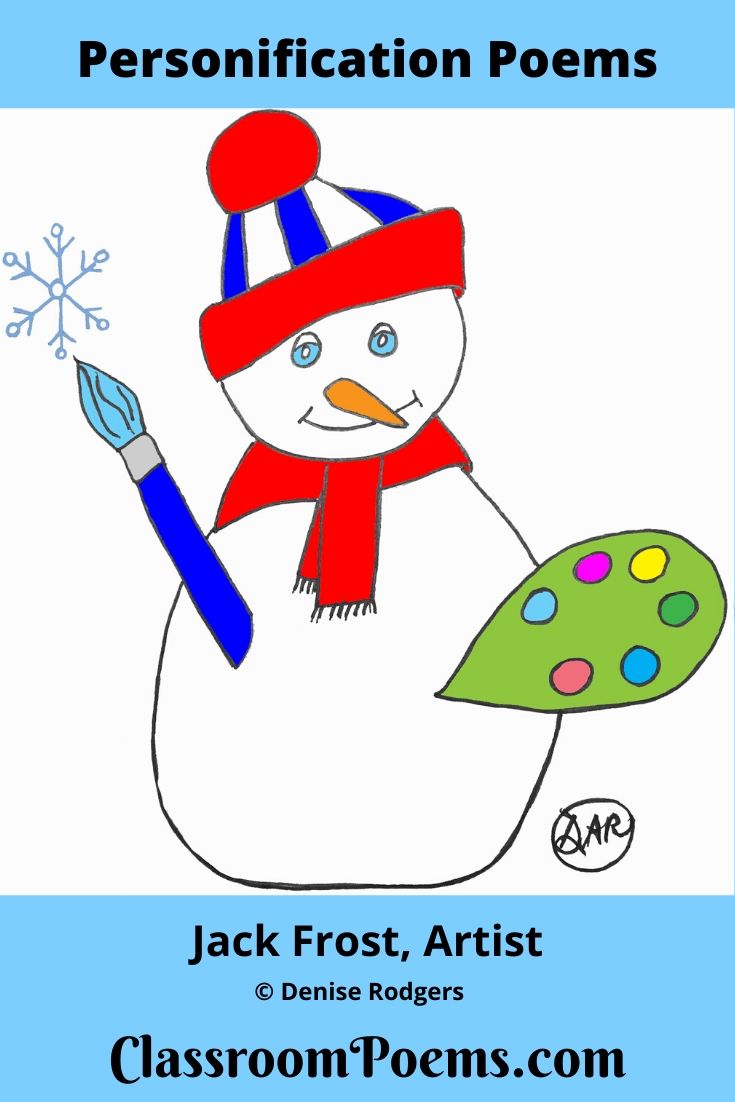 JACK FROST, ARTIST
There's a pattern on my window
When the night's been very cold.
The artist who created it
Is Jack Frost, I am told.

He only deals in abstracts
And in geometric lines.
He's not much for still lifes
Or Renaissance designs.

He doesn't paint in color;
His designs are all in white.
The sunlight shows their beauty
In the early morning light.

I never hear him working;
Not a scratch, a sigh, or cough.
It's not too bad for Jack, though;
He gets the summer off.

The third of these poems is The Sun Just Had a Nasty Day, above, from my book, A Little Bit of Nonsense. You can tell from the title that the sun is given human qualities in this poem. (The sun -- or lack of it -- can cause a nasty day; but it cannot have a nasty day.)

If you want to please us, Sun,
(don't take this as a warning)
if you're going to pierce the clouds,
please do it in the morning. 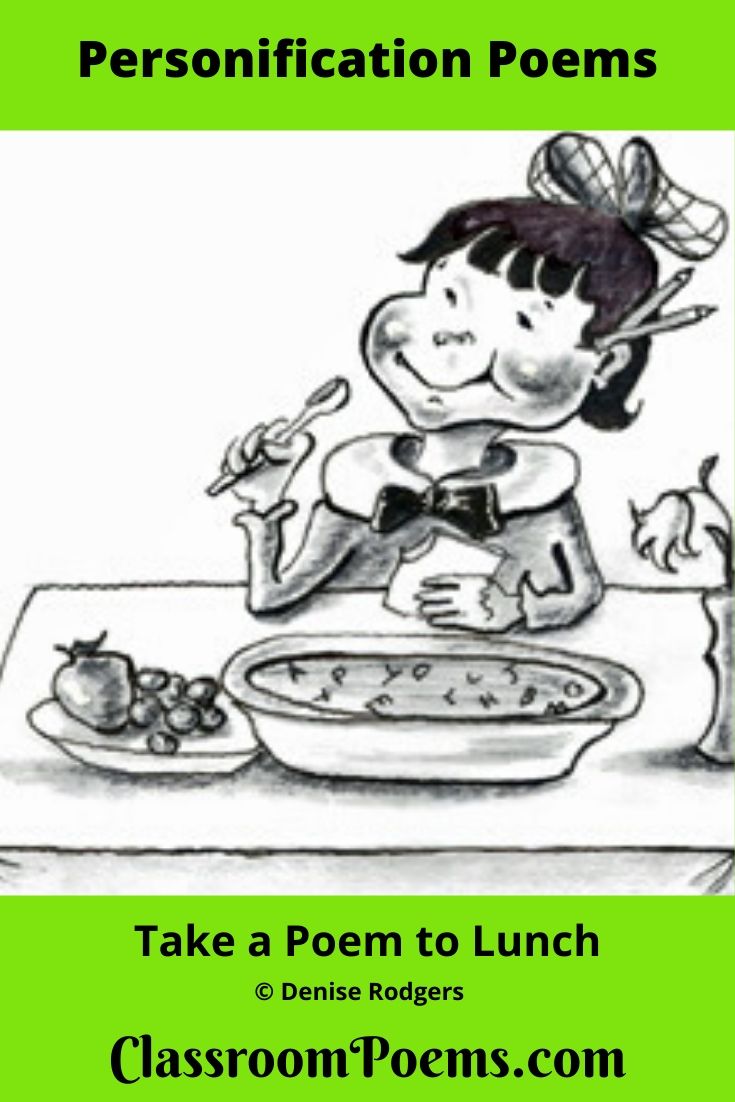 The fourth personification poem says it all in the title. Take a Poem to Lunch treats the concept of a poem itself as a human companion. This poem is on page 72 of A Little Bit of Nonsense.

TAKE A POEM TO LUNCH
I'd love to take a poem to lunch
or treat it to a wholesome brunch
of fresh cut fruit and apple crunch.
I'd spread it neatly on the cloth
beside a bowl of chicken broth
and watch a mug of root beer froth.

I'd feel the words collect the mood,
the taste and feel of tempting food
popped in the mouth and slowly chewed,
and get the smell of fresh baked bread
that sniffs inside and fills our head
with thoughts that no word ever said.

And as the words rest on the page
beside the cumin, salt and sage,
and every slowly starts to age,
like soup that simmers as it's stirred,
ingredients get mixed and blurred
and blends in taste with every word
until the poet gets it right,
the taste and smell
and sound nd sight,
the words that make it fit.
Just write. 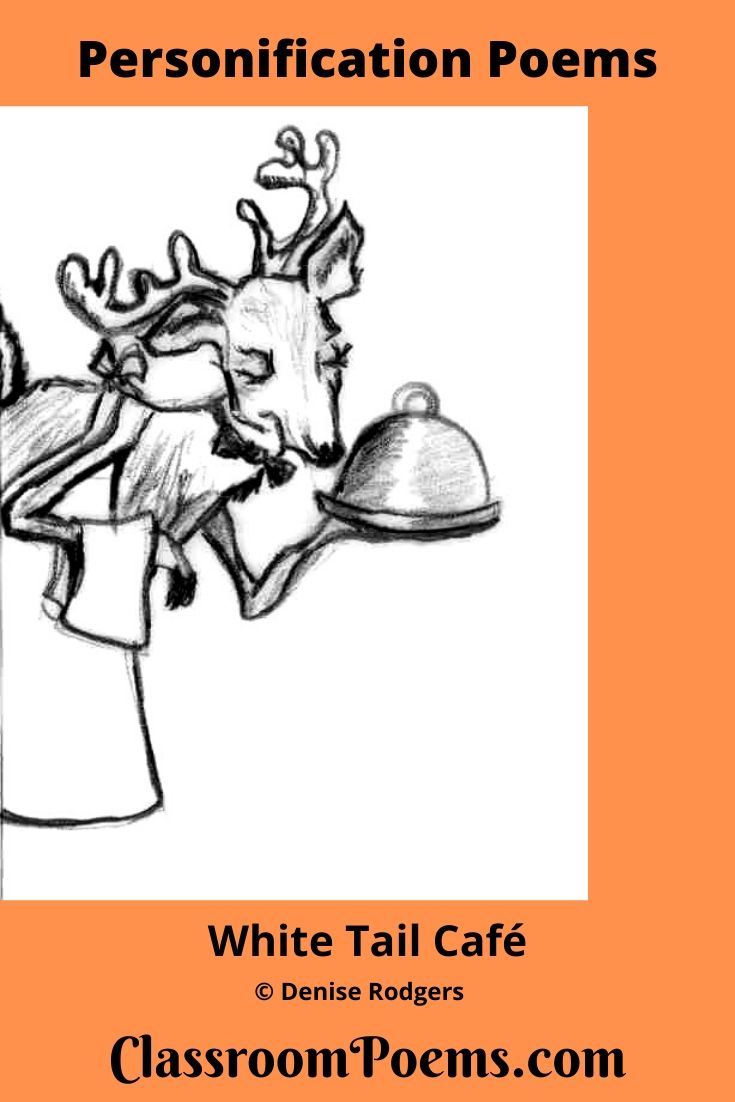 The next example is White Tail Café, from Great Lakes Rhythm & Rhyme. While the this poem is basically about what deer eat, the device that makes you picture the deer selecting these choices at a café, from a menu, is personification.

THE WHITE TAIL CAFE
Welcome, my deer,to the White-Tail Café.
Because it is summer
our menu today
has mushrooms, tomatoes
and wildflower stew,
some tasty young carrots
we've plucked just for you.

So glad it's not winter
when food is so stark
that all we can offer
is four kinds of bark,
from maple and birch to
some willow or oak.
Well, that's what we serve to
our deerly loved folk.

It's more than a buck, but
we hope that you'll stay
for not that much doe at
the White Tail Café.