Enjoy these metaphor examples! Metaphors are an extremely useful literary device -- whether you are writing a funny poem, a serious poem, structured poetry or free verse. In fact, novelists and nonfiction writers alike use metaphor. 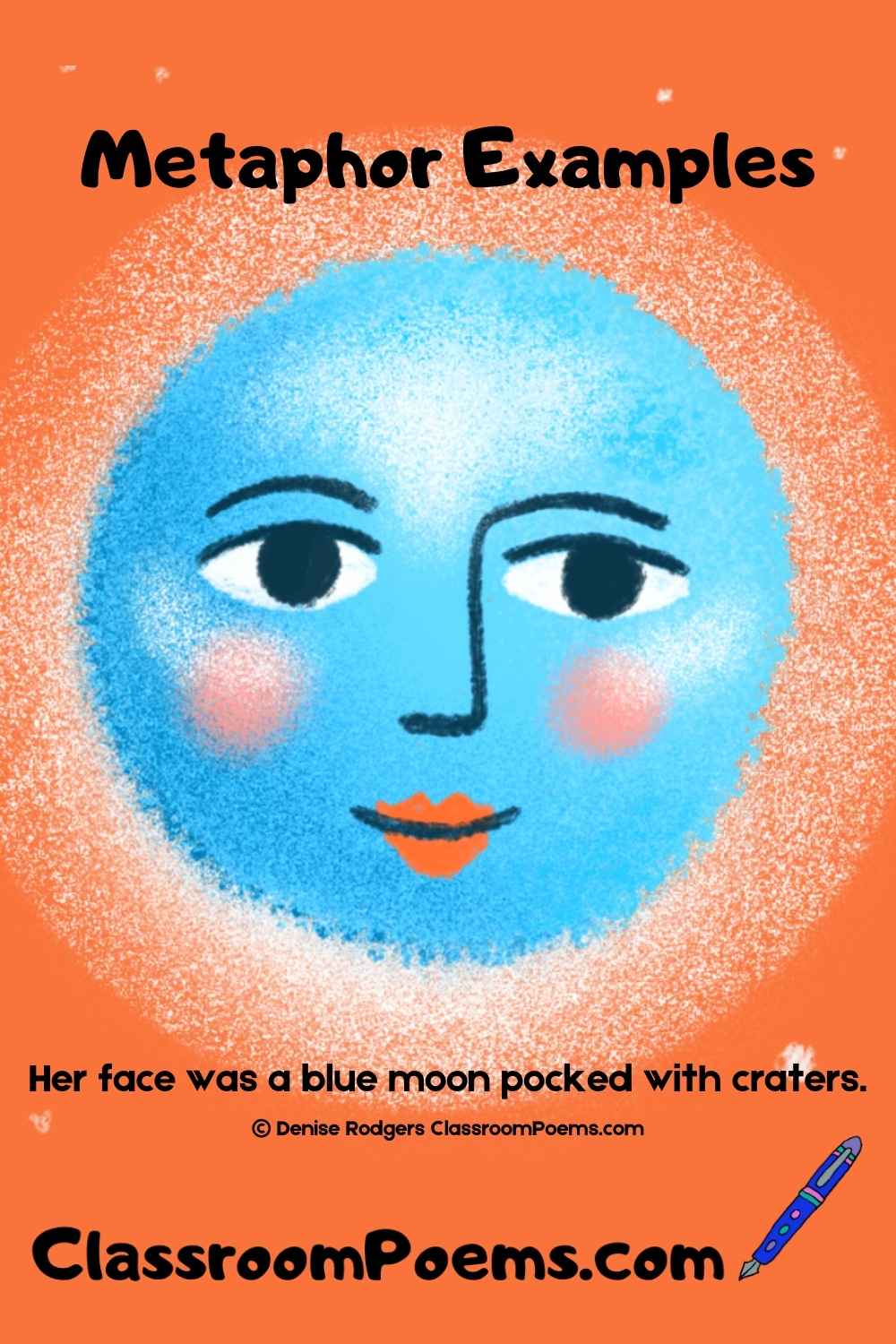 Her face was a blue moon pocked with craters.
While a person might have a bluish tint to their face and it might be scarred by current or former pimples, it definitely is NOT a blue moon with craters. 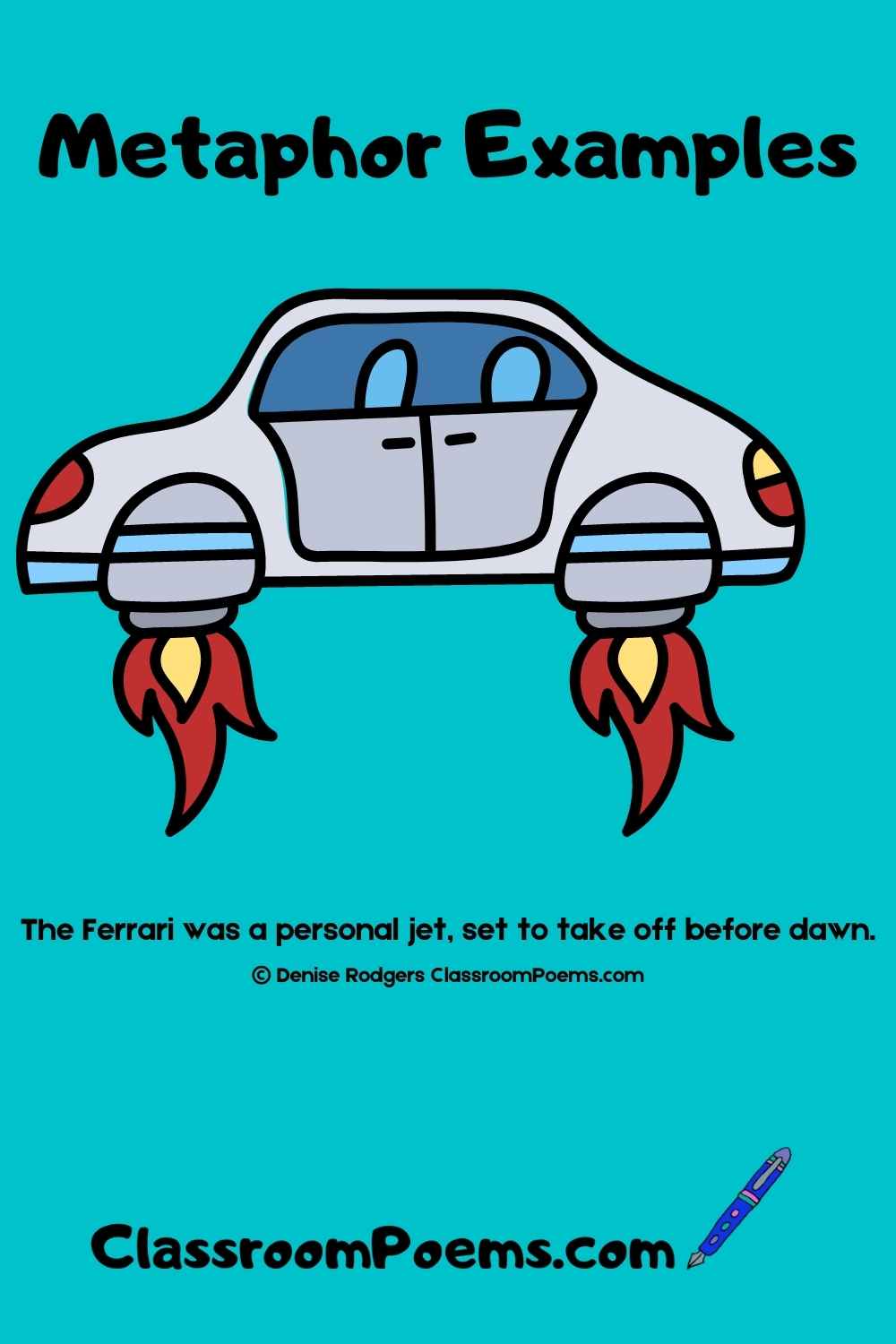 The Ferrari was a personal jet, set to take off before dawn.
Yes, a revved up sports car does give the same feeling of forward motion as a jet plane ready to take off at the airport. 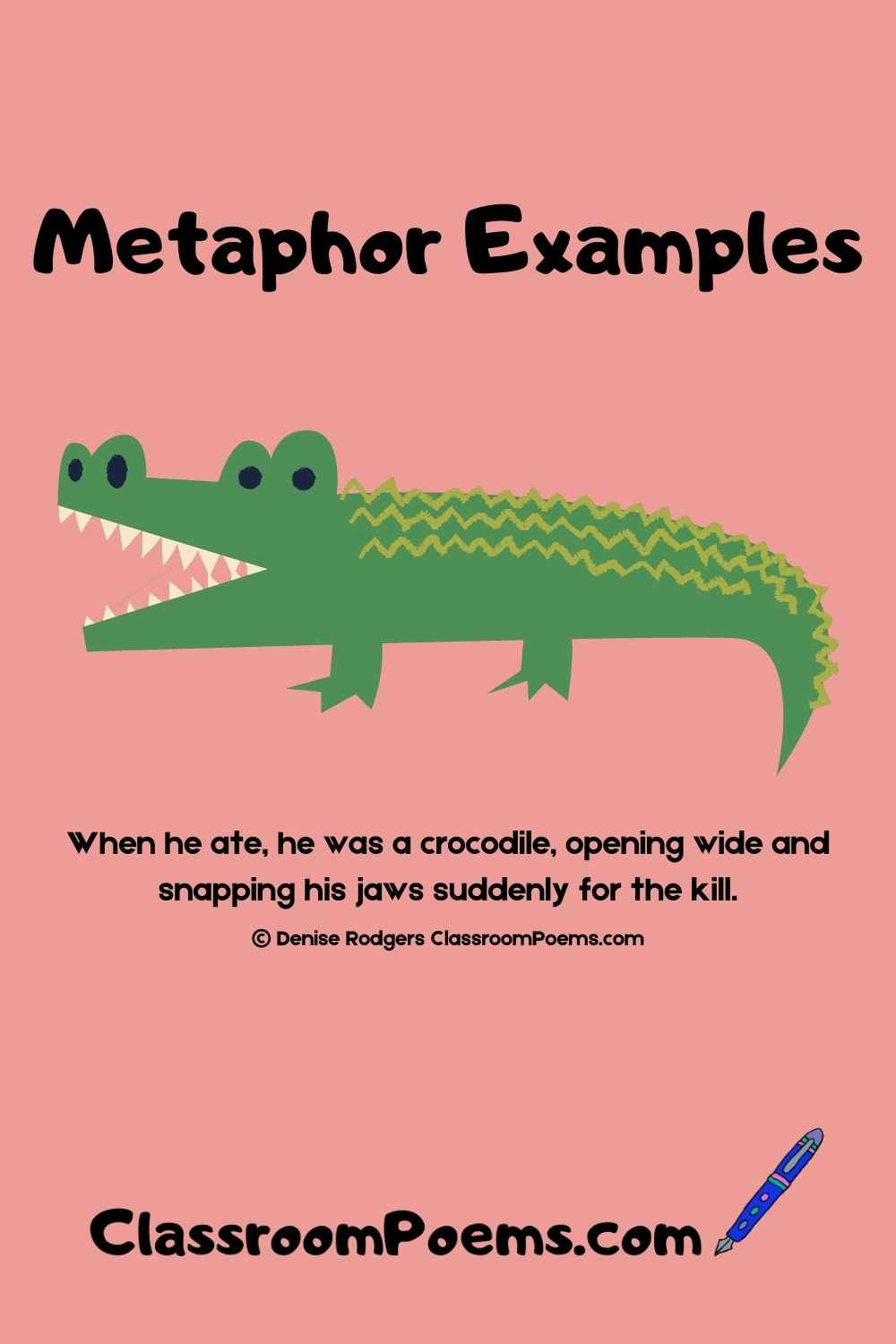 When he ate, he was a crocodile, opening wide and snapping his jaws suddenly for the kill.
This person really likes to eat! 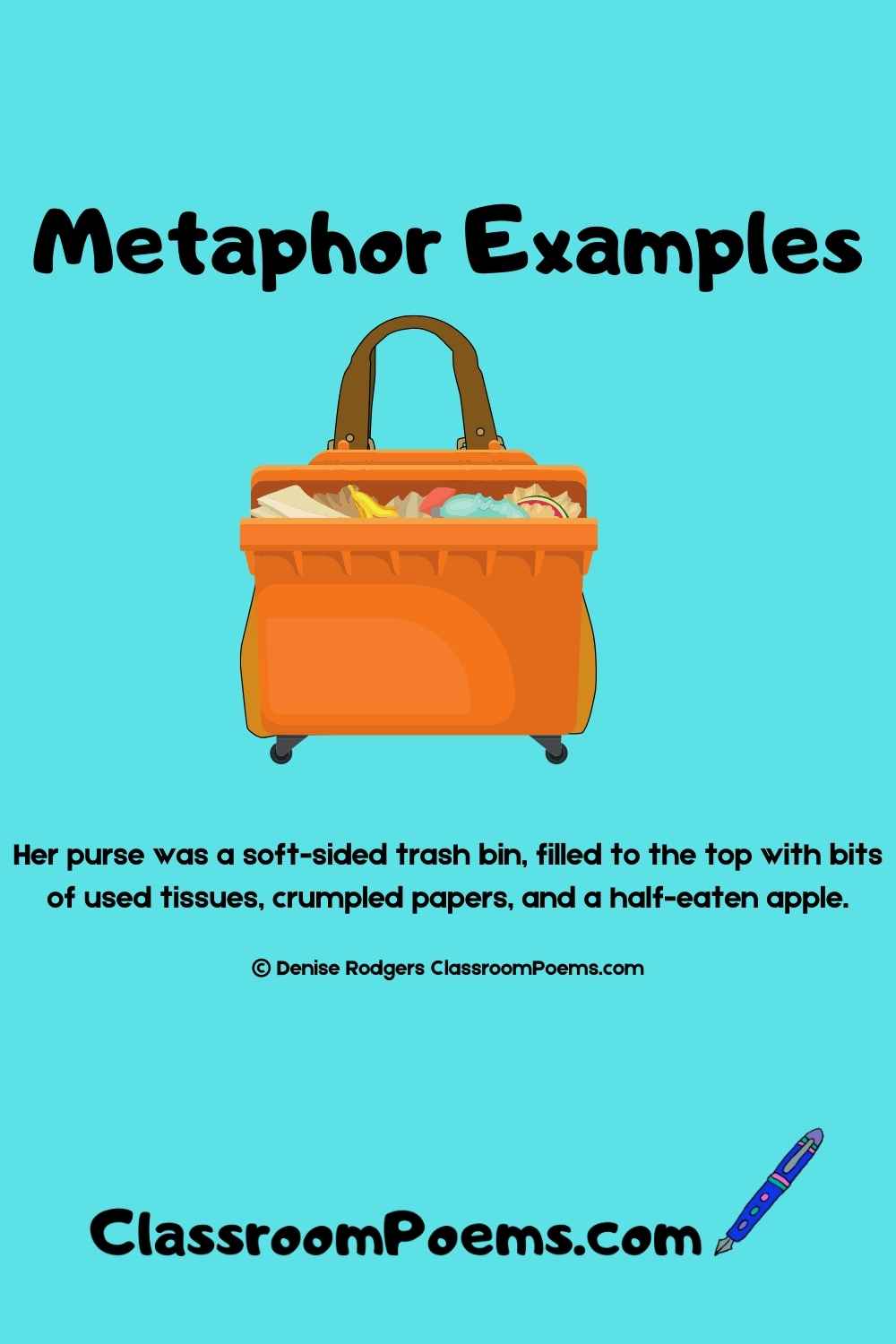 Her purse was a soft-sided trash bin, filled to the top with bits of used tissues, crumpled papers, and a half-eaten apple.
My purse has looked like this before, minus the apple maybe. The trashcan is a great metaphor for a purse like this! 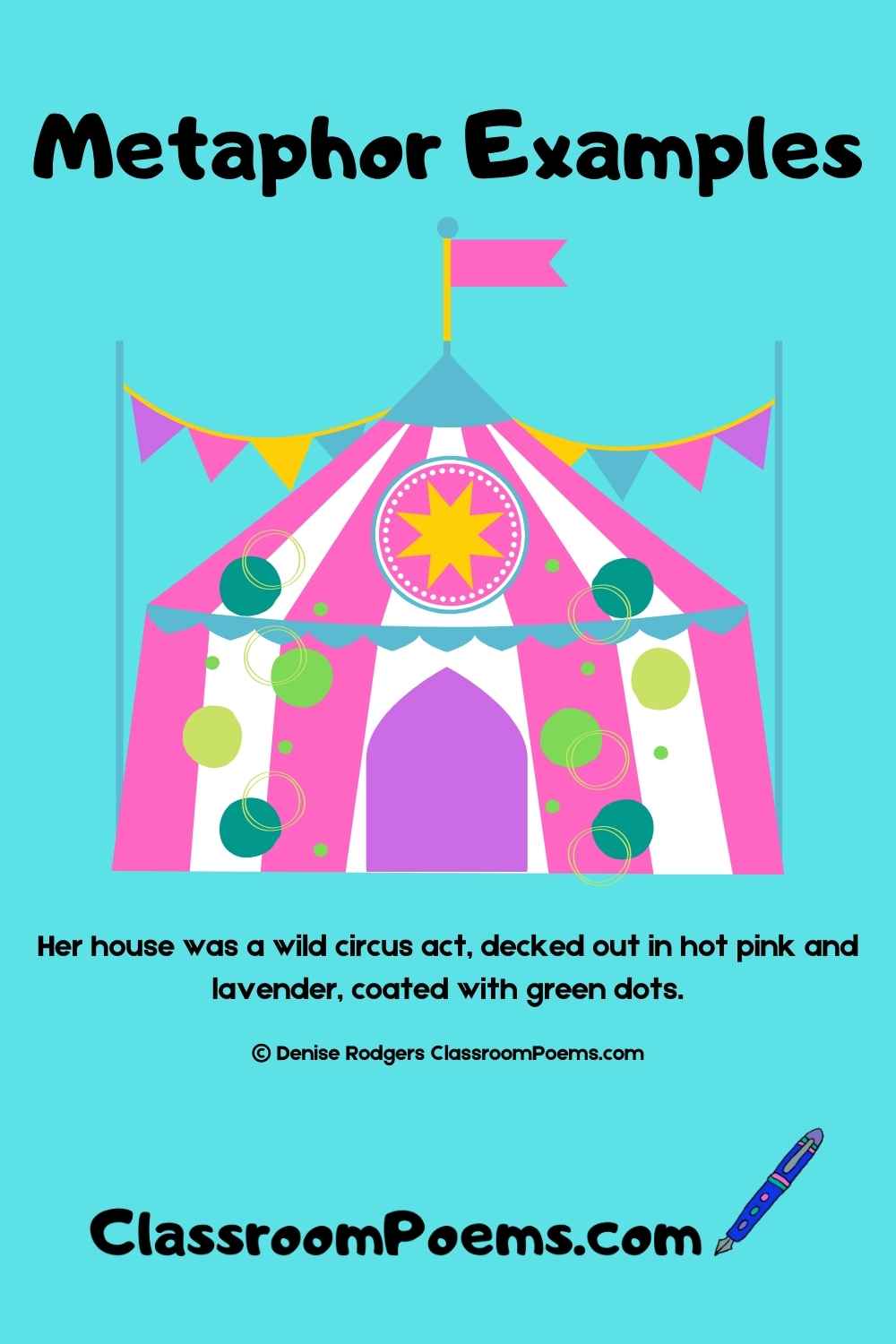 Her house was a wild circus act, decked out in hot pink and lavender, coated with green dots.
There aren't too many houses like this, but they do exist. (Look it up on your favorite search engine.) They most certainly do bring to mind a "wild circus act." 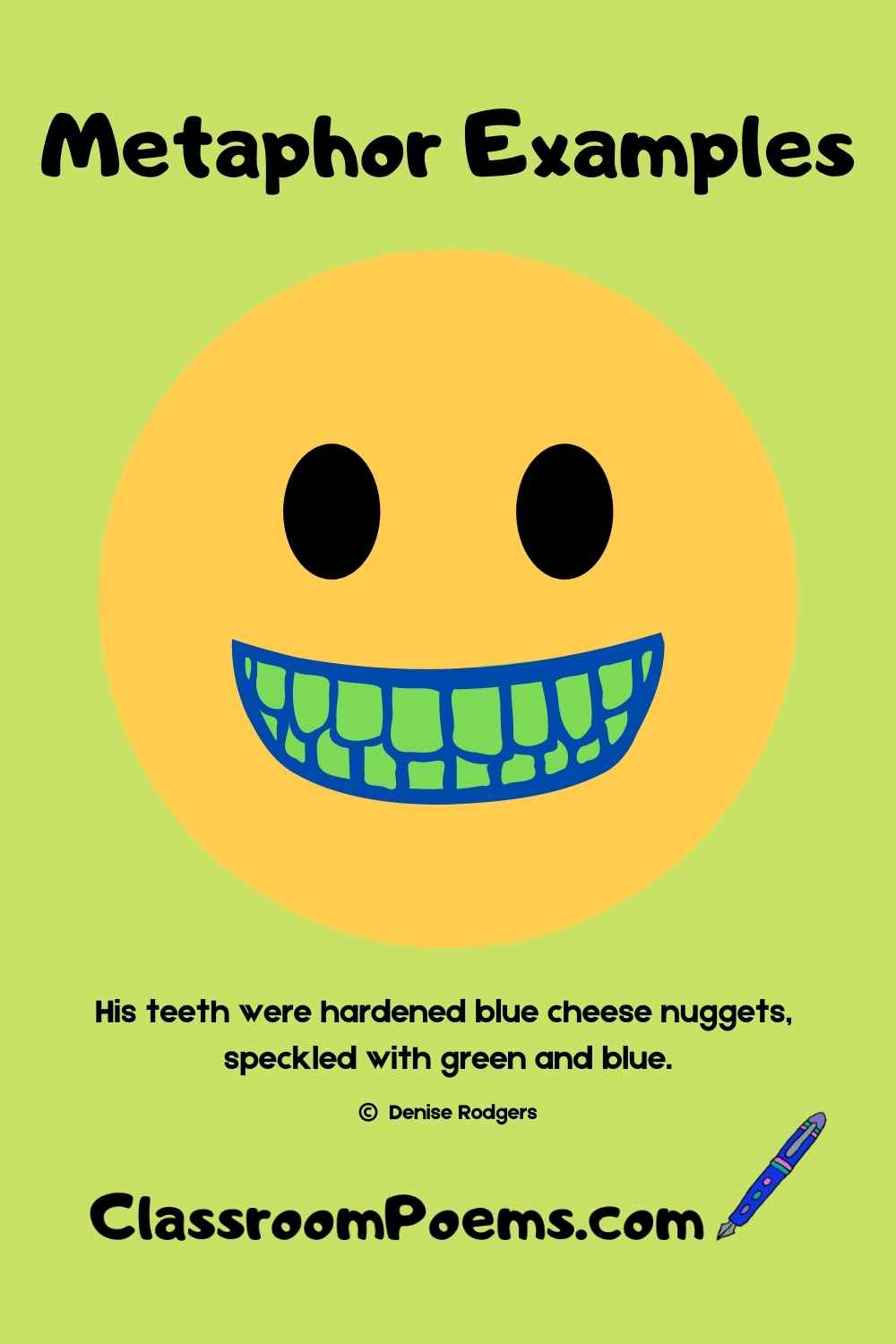 His teeth were hardened blue cheese nuggets, speckled with green and blue.
Oh my, this person sounds like they are way overdue for a trip to the dentist's office. Of course, no one's teeth are made of cheese. But once again, these words really paint a picture. 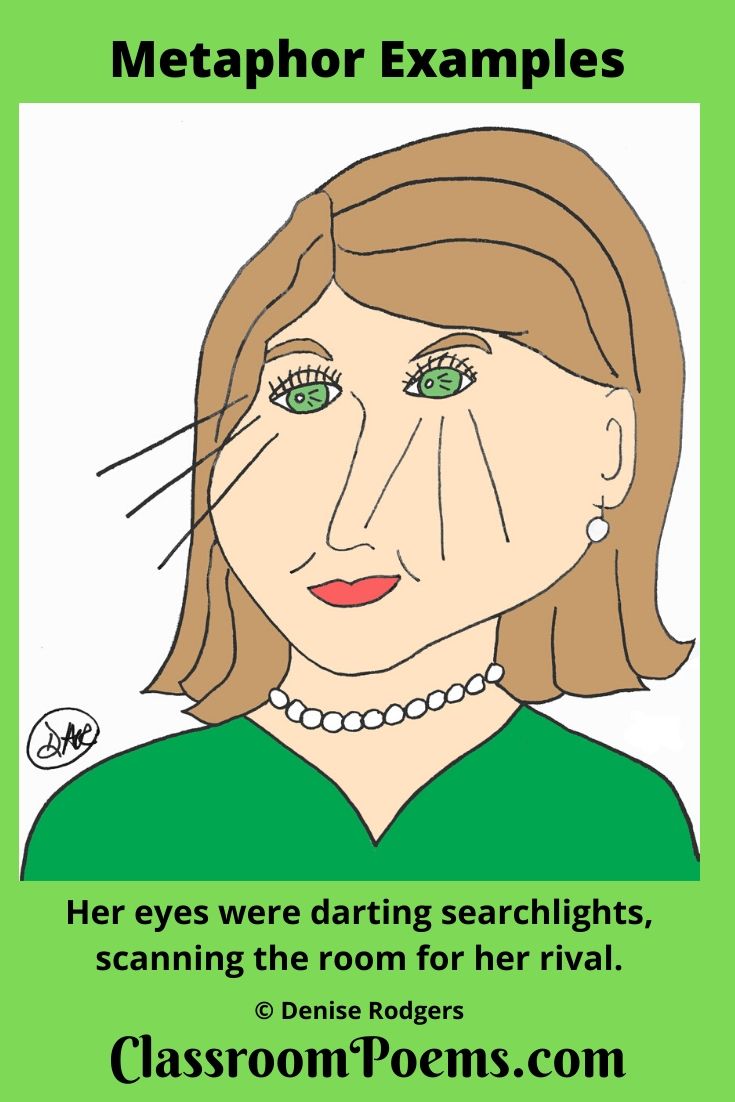 Her eyes were darting searchlights, scanning the room for her rival.
We've all seen a person who are looking for someone, their eyes searching a room. Comparing such eyes to a searchlight is a metaphor that paints a vivid picture. 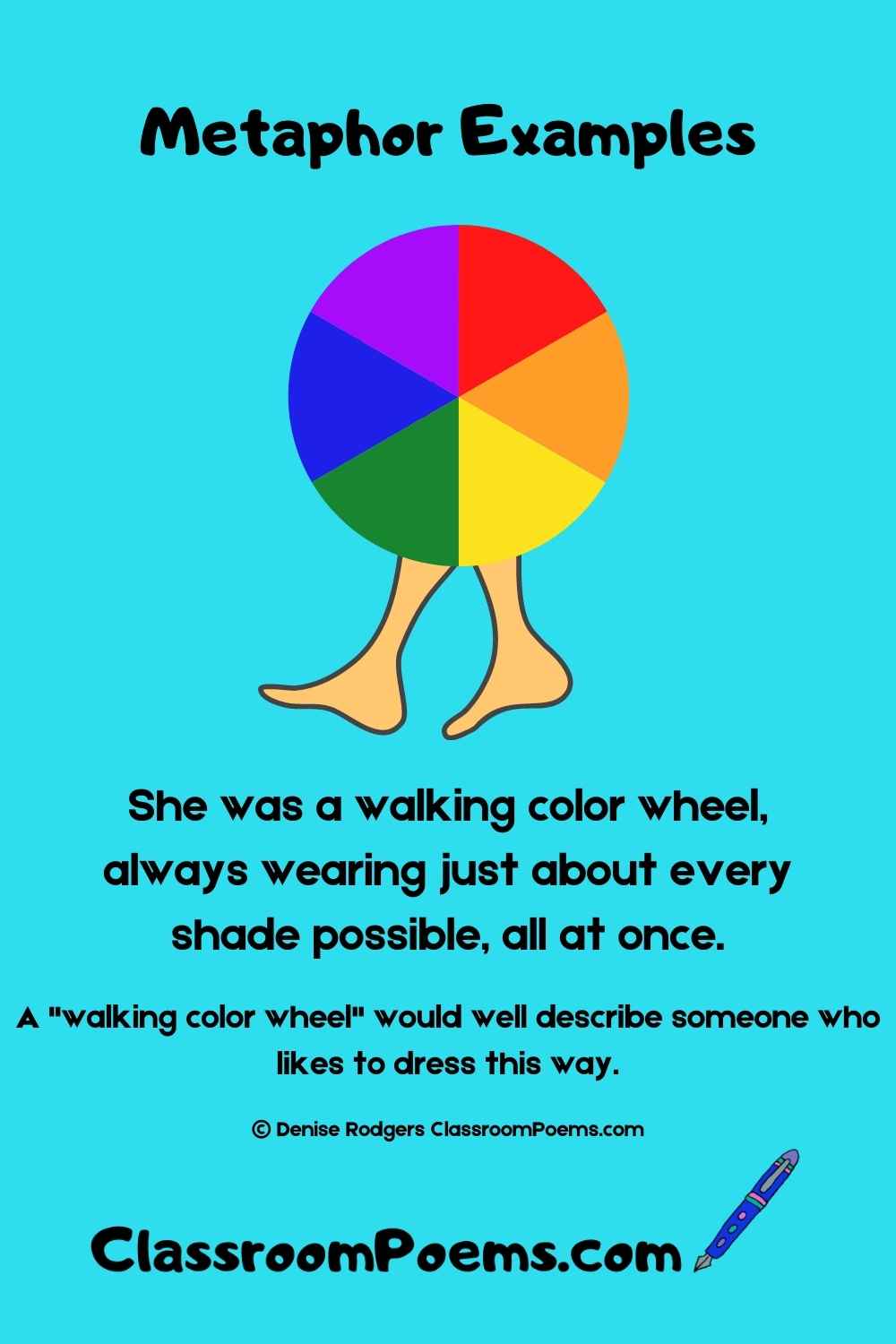 She was a walking color wheel, always wearing just about every shade possible, all at once.
I'm fond of multicolor items myself, though I never wear them all at the same time. A "walking color wheel" would well describe someone who likes to dress this way. 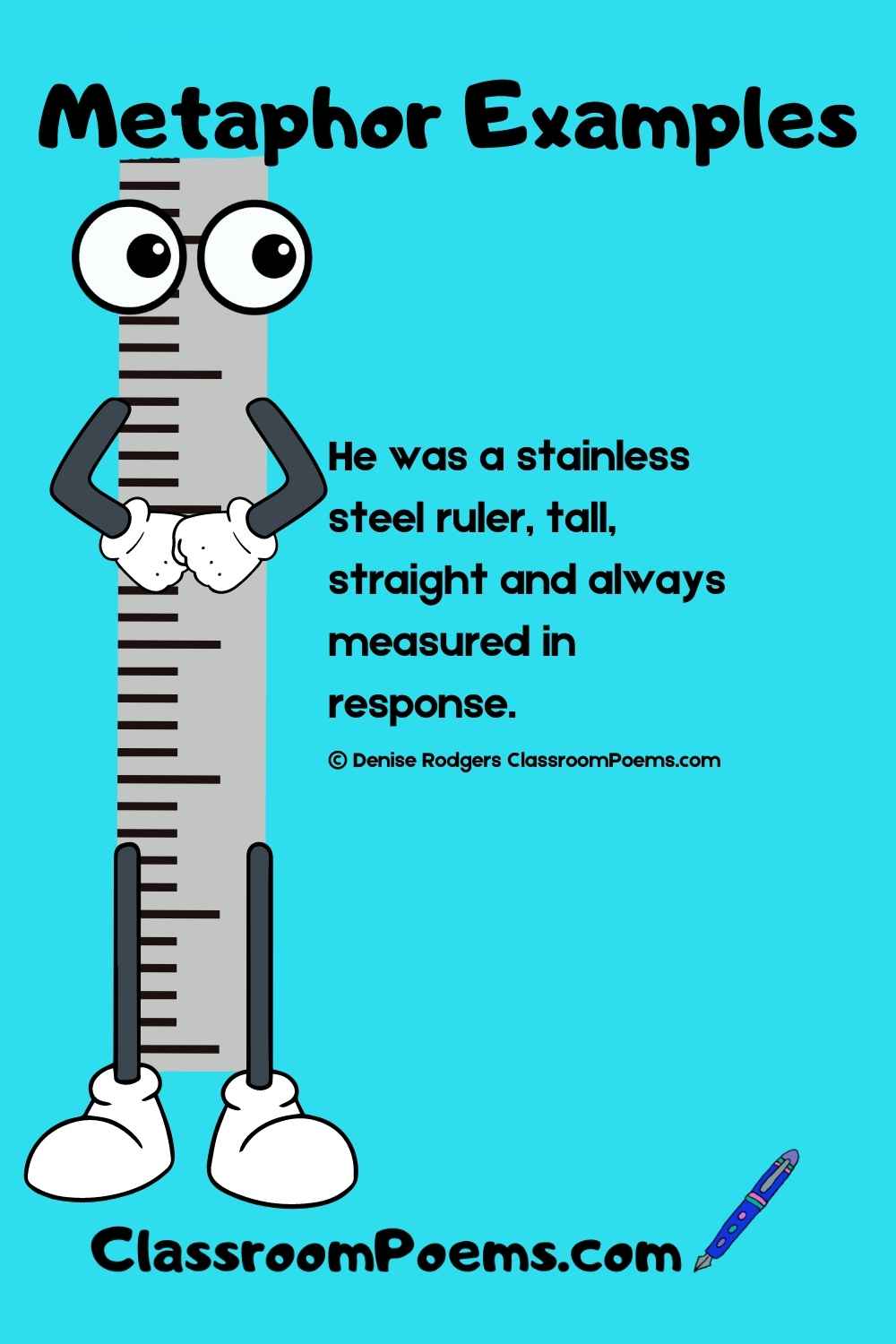 He was a stainless steel ruler, tall, straight and always measured in response.
Here is a metaphor that describes in more than one way. You could call it an extended metaphor. Like a ruler, this person stands "tall and straight," and being measured in response means that this person thinks before he talks. It is a play on words, but also a good use of metaphor. 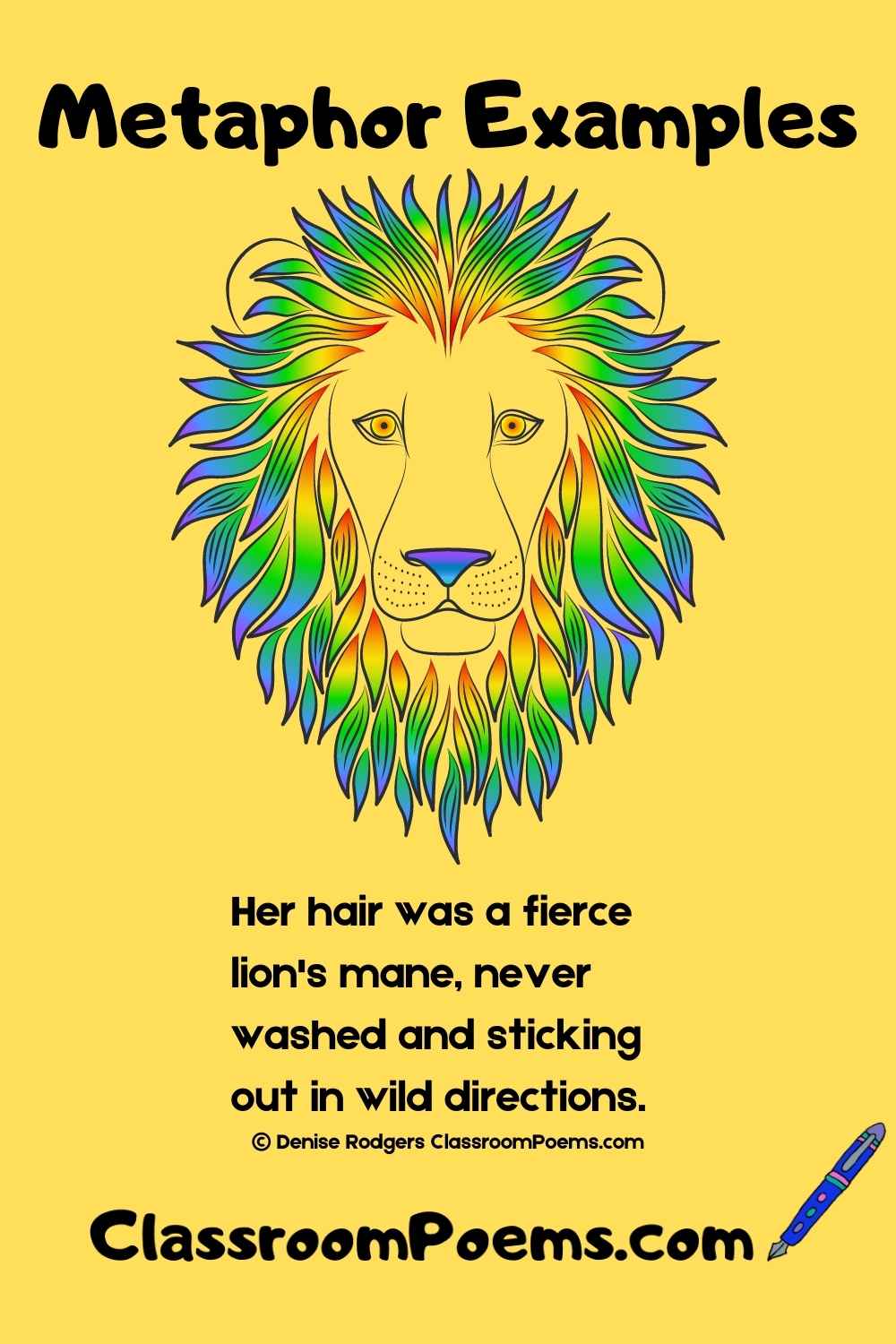 Her hair was a fierce lion's mane, never washed and sticking out in wild directions.
Being a naturally curly girl, I can relate to this metaphor, although I'm not sure how "fierce" I am most of the time. (And I DO wash my hair!) But description gives us a good idea of how this person looks. 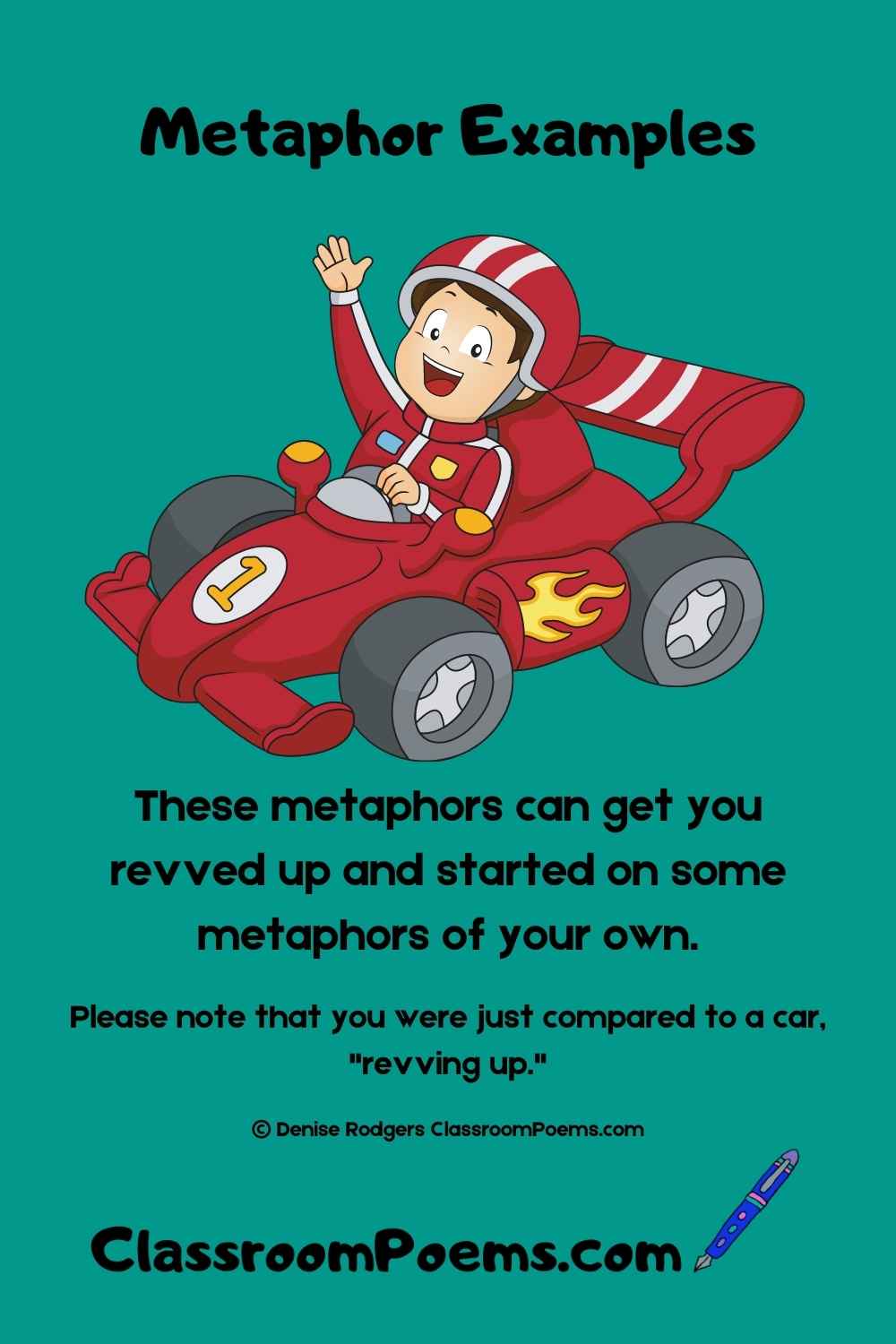 These metaphors can get you revved up and started on some metaphors of your own.
Please note that you were just compared to a car, "revving up."

A metaphor is a literary device that involves describing someone or something by comparing it to something else without use of "like" or "as." Comparisons that use "like" or "as" are similes , another well-used device.

Metaphors and similes are how symbolism gets into our writing. And humans love symbolism. We like to feel that things "mean something," and metaphors help satisfy that desire. Not only that, these similes and metaphorical comparisons paint a vivid picture in our minds.

Generally, when I'm writing, I don't consciously think, "Gee, I'd better pepper these babies with metaphors." Instead, metaphors happen when you relax and describe something in the most accurate and meaningful way possible.

Well, that was fun! I could write metaphor examples all day. The trick is to expand upon them to tell a story, or in my case, write a poem (or two or three or more). If you've enjoyed these metaphor examples, you might like my page of  metaphor poems.

More tools to help you become a poet!