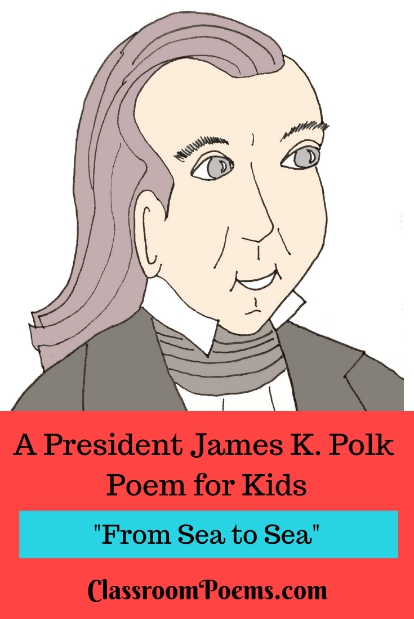 From Sea to Sea
(A James K Polk Poem)

While he was the president,
the future, "meant to be,"
was that our fledgling country
would spread from "sea to sea."

He compromised with England
to gain the great Northwest.
And then a war with Mexico
would put him to the test.

When the war was eneded,
southern Texas to LA
were all within our borders
and remain so to this day.

Our destiny was manifest.
What Polk worked toward the most
was stretching  US borders
till they spread from coast to coast.

11th President of the United States

During the presidency of James K Polk, the border of the United States grew from the Atlantic to the Pacific ocean. After much negotiations and compromise, Polk secured the Oregon Territory from the 49th parallel south, with the exception of the southern tip of Vancouver island. This includes what is now Washington State and Oregon.

Prior to his term in office, the US had annexed (taken) Texas from Mexico. Polk arranged to have a purchase of more Mexican land from the Rio Grande River to the Pacific ocean. When the Mexican president's refused to meet with the US negotiator, Polk sent troops to the disputed territory, leading to the Mexican-American War.  As a result of this conflict that took place from 1846-1848, the United States held onto Texas and gained New Mexico  and California, as well as territory that would later become other western states.

* James Polk was the governor of Tennessee before running for president.

* He was a long shot in the race, what is  called  "dark horse candidate," meaning that people did not think he could win.

* James Polk was the first president to govern a US that extended from the Atlantic to the Pacific Ocean.

* The land won in the Mexican-American War was the largest land acquisition since the Louisiana Purchase.

* Polk was known for his lack of humor. He was suspicious of others, worked hard, and slept very little.

* He died only three months after the inauguration of Zachary Taylor, the  succeeding president.

* Polk installed gas lights in the White House in 1848. First Lady Sarah Childress Polk was concerned about the reliability of this new technology. She was proven right when the gas lights went out during a White House party, and candles saved the day.

* Speaking of White House parties, they were known to be boring affairs during the James Polk administration. He did not allow alcohol, music, or dancing.

* Because James K. Polk was a nondescript man, people often did not notice when he entered the room. For this reason, at his wife's suggestion, he instituted the playing of "Hail to the Chief" whenever the president entered the room in official capacity.

* President Polk did not trust banks and kept his cash in bags around the house.

* Polk's wife, Sarah, outlived him by 42 years, and rarely left home again except to go to church -- but she did entertain dignitaries in her home after a long mourning period.

If you enjoyed this President James K Polk poem, please go to US Presidents List, for links to more poems about the US presidents. For more more James K Polk facts to to WhiteHouse.gov.