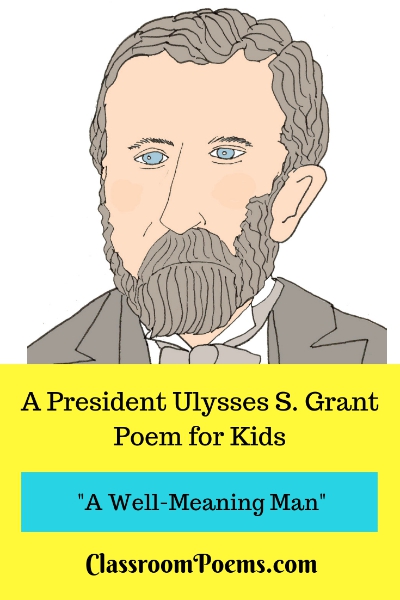 A Civil War hero, he won when he ran
and came to the White House, a well-meaning man.
Though honest himself with a strong will to lead,
his terms were a magnet for fraud and for greed.
His friend brought on scandals...from price-fixing gold
to pocketing taxes. The cheating was bold.
They robbed from the Indians out in the West,
took government monies, put Grant to the test.
So strong when at war, but in office, so weak.
The outlook for ethics was terribly bleak.
The scandals were cause of his legacy's doom.
And here is a secret:
He's now in Grant's tomb!

Ulysses S. Grant was a successful general in the Civil War, which made him well known nationally. Unfortunately, military success does not necessarily translate to the same in politics. His two terms in office were wracked with scandal. While honest himself, he had a hard time controlling people in his administration. Even after he retired the presidency and entered his son's brokerage firm, he was plagued with scandal int he business world as well. He did not benefit from these scandals.

* Ulysses S Grant was named Hiram Ulysses Grant at birth. When Ohio Congressman Thomas Hamer nominated him to attend West Point, he mistakenly named him Ulysses S. Grant. Officials at West Point informed Grant that he'd have to change his name if he wanted to attend the prestigious school. According to Grant, "S" was therefore an initial that stood for absolutely nothing.

* Grant was not successful in the business world. He failed at farming, real estate, in his parent's leather business, and later in life as a broker with his son.

* He was a great success, however, in the military. He won the first major victory for  the North in the Civil War at Tennessee's Fort Donelson, where he demanded unconditional surrender from the Confederate troops.

* Before the end of the Civil War, he won two more complete surrenders at Vicksburg, Mississippi and Appomattox, Virginia.

* Grant and his wife, Julia, were supposed to be at with the Lincolns  at the theater on the night of the assassination. The Grants were en route to New Jersey to visit their children.

* At age forty-six, Grant was the youngest president, ever, to that point i history.  His first experience in political office was as president of the United States. Quite a heady experience!

* Due to all the scandal in his personal and political life, Grant and his wife were in dire financial straits late in his life. He chose to write his memoirs, hoping this would help his family's financial situation after his death. His plan worked! After penning his life story, the famous Mark Twain (Samuel Clemens) offered to publish it at a higher payment than Grant's then-current offer. He accepted. Royalties from this sale posthumously gave his wife hundreds of thousands of dollars.

* There is a standard gag: "Who is buried in Grant's Tomb?" The answer seems obvious...Ulysses S. Grant, of course. But the real answer is that the name of Grant's burial place is General Grant's National Monument. To complicate the answer to this question further, Grant's wife, Julia, was also interred with her husband upon her death, December 14, 1902.

For more Ulysses S Grant facts, go to WhiteHouse.gov or History.com. If you enjoyed this President Ulysses S Grant poem, please go to our US Presidents List page, for links to more US presidents.