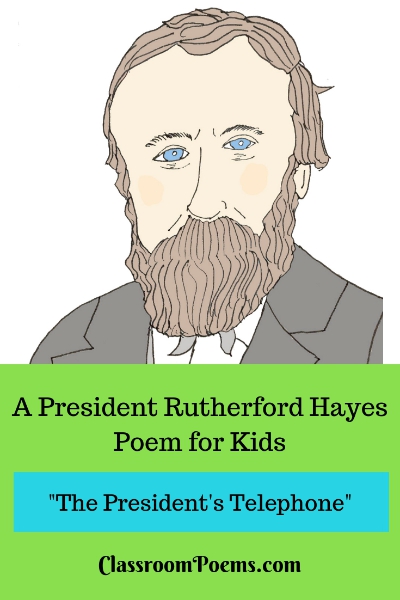 The President's Telephone
(A Rutherford B Hayes Poem)

Hayes was the first to make use of a phone.
But with no one to call, he was squarely alone.
He was so important, his number was "1".
He started a trend that will never be done.

The White House has phone lines and e-mails and faxes
for people who want to complain about taxes,
or policy, gun law, or government loan...
To think it all started with Haye's single phone!

The second Rutherford B Hayes poem, also by Denise Rodgers, is Rutherfraud Hayes.

Here is the tale of one "Rutherfraud Hayes,"
who earned a bad nickname in spite of his ways.
Although he was honest and steadfast and true,
the "Rutherfraud" name seemed to stick just like glue.

His term was decided by partisan vote.
His win by default got the Democrat's goat.
And though he was honest for all of his days,
the blame on his nickname was Rutherfraud Hayes.

Although Rutherford Hayes was an honest man, the presidential election of 1876 was close, just as in the George W. Bush-Al Gore election of 2000, creating political animosity. The winner was determined by a special  congressional election commission, voting him in 8 - 7, along party lines. Much as in the Bush-Gore election, Democrats did not consider Hayes a legitimate president because of the tightness of the race and the manner in which it was decided.

* Hayes was the valedictorian of the Kenyon College class of 1842 in Ohio. He went on to study law at Harvard.

* Hayes' wife, Lucy, was the first First Lady with a college degree which she earned at the Cincinnati Wesleyan Female College.

* While he had no military experience, Hayes volunteered for duty and was eventually promoted to Major General in the 23rd Ohio Volunteer Infantry.  He was wounded multiple times in battle.

* After his Civil War experience, Rutherford Hayes served in Congress for two years and then as a three-term governor of the state of Ohio.

* First Lady Lucy Hayes had the first Siamese cat ever in the United States. It was a gift from David B. Sickels, the American consul in Bangkok.

* While in office, President Hayes signed legislation allowing women to argue cases before the Supreme Court.

* The Hayes administration eliminated alcoholic beverages from the White House. It was both to please the prohibitionists of the time, and also to maintain their sense of  White House decorum. While they did make exceptions for certain visiting dignitaries, they abstained from drinking themselves.

*  In 1880, Rutherford Hayes was the first president to travel to the west coast of the United States. He took a 71-day trip that went through the Rocky Mountains.

* The Easter Egg Roll, a tradition that continues to this day, started during the Hayes administration.