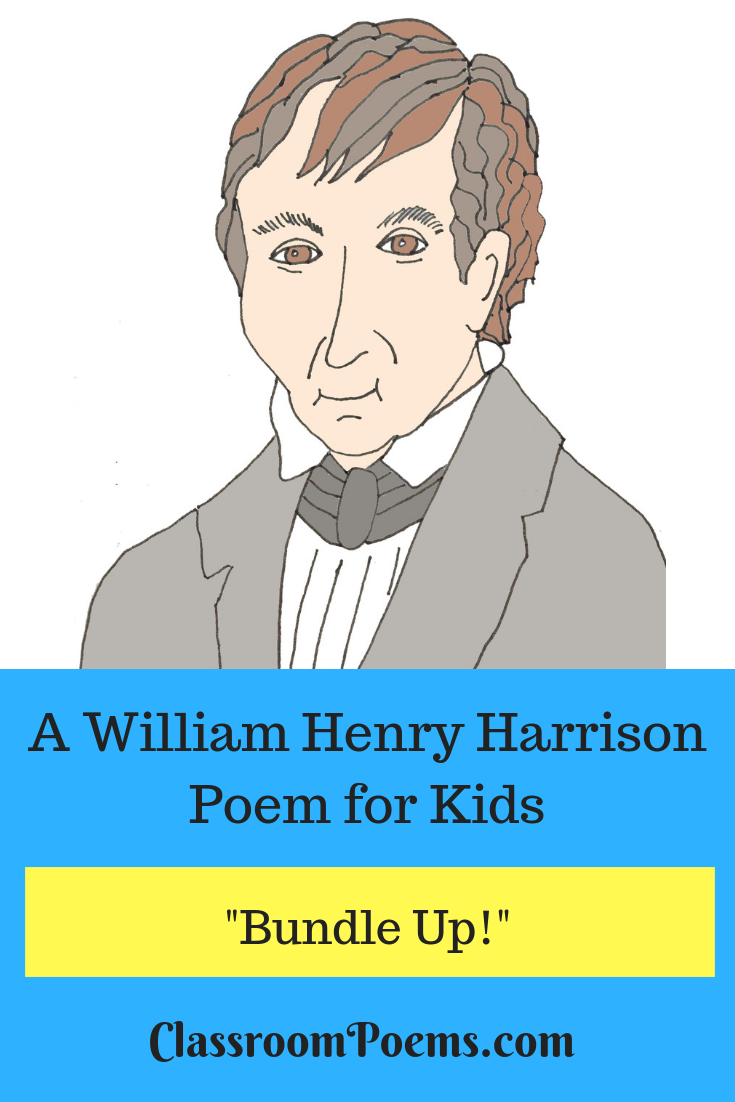 A hero on the battlefield;
he really knew his stuff.
A man, a fighter, hard as nails,
so brave, so strong, so tough.
But also, kind of stubborn
when his story's done and told.
He stood out in the winter air,
so brisk, so damp and cold.
He took two hours to give his speech
Inauguration Day.
No scarf, no hat, no overcoat.
The sky was dank and gray.
He caught a cold, grew very ill,
took quickly to his bed.
And then in less than thirty days,
this president was dead.
And so this man's sad legacy
(if I may be so bold)
is wrap up tight and bundle up
outside when it is cold!

9th President of the United States

William Henry Harrison, a member of the Whig Party, had the sad distinction of being the first president to die in office. He was sixty-eight years old and kind of a diehard. He gave the longest Inaugural Speech in history  (to that time) for nearly two hours. Not only that, he refused to wear a hat or even an overcoat. Afterwards, he was caught in a downpour. Of course he caught a nasty cold. The cold turned into pneumonia. And the rest, sadly, is history.

No Log Cabin for Harrison
Though he was depicted as a log cabin dweller during his presidential campaign, William Henry Harrison was born in 1773  to a wealthy Virginian planter family.

Varied Academic Career
Harrison studied the classics and history at Hampden-Sydney College, and then medicine in Richmond.

Military Calling
He became interested in the military in 1791, and headed to the Northwest Territories to serve till 1798.

No First Lady in White House
Anna Harrison was the only First Lady to never enter the White House. She was still at home in Ohio during the Inauguration, and had sent her daughter-in-law to attend in her absence. Exactly a month later, her husband succumbed to his illness, and she had not yet made it to Washington, D.C. Keep in mind that travel wasn't as easy then as it is today. There is historical speculation that this First Lady was still grieving the loss of other close family members, making it difficult for her to make the trip.

Tippicanoe & Tyler, Too
This was the successful campaign slogan used by William Henry Harrison and his running mate, John Tyler, both of the Whig Party. Tippicanoe was where Harrision led the defense against a native American attack in 1811.