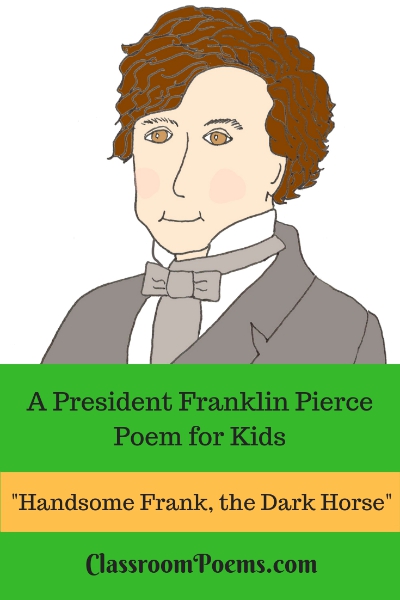 He was a "dark horse,"
Yet he quickly pulled rank.
Winning, of course,
with the name, "Handsome Frank."

With much more than looks,
(Such a fine courtroom speaker!)
He went by the book,
Was a compromise seeker.

Took sides with the South
Yet placated the north.
With a two-sided mouth
And two eyes going forth.

He lasted one term,
Not a single day more,
And could not hold back
The slow slide into war.

14th President of the United States

Facts about  the Franklin Pierce Poem

President Franklin Pierce was a "dark horse" candidate, which means he was not well known or expected to win. This man could have been president during the television age. He was very good looking and a great speaker, as well. He even had the nickname, "Handsome Frank." To maintain peace, he balanced North and South interests in his presidential cabinet appointments. But like Presidents Taylor and Fillmore before him, he found that a happy compromise was hard to reach.

Reluctant President
Neither Pierce nor his wife were eager to return to Washington, D.C. He'd been retired for ten years from serving in the Senate when nominated  by Democrat party friends.

Amazing Speaker
A talented speaker, he delivered his inaugural address from memory! He was famous in New Hampshire as a courtroom lawyer. People would come long distances just to hear him speak.

Considered Slavery a Constitutional Right
Despite the fact he was a Northern politician, Pierce supported the right to own slaves. However reprehensible and radical this sounds to modern sensibilities, Pierce was a man of his time. There were many people who supported, and eventually fought for, this right. Pierce feared fanatics on both sides of this issue and felt, very rightly, that this could divide the union of the states. After his presidential term was over, Pierce spoke out against then President Lincoln's Emancipation Proclamation. Because the Union won the war, Pierce stayed out of the public eye for the rest of his life.

Purchased Parts of Arizona and New Mexico
In 1853, the US paid Mexico $10 million for the southern parts of Arizona and New Mexico, with the intent of building a southern transcontinental railroad. This purchase opened the issue of whether new Western states could become slave-owning states. As Southerners and Northerners vied for control of Kansas, violence erupted. This was, unfortunately, foreshadowing of the Civil War to come. Aside from the ominous violence, the fact was the addition of nearly 30,000 square miles created the footprint of the contiguous forty-eight states, which remains the same to this day.

Home Improvements
Pierce had central heat installed in the White House, along with a second bathroom. He also brought in the first ever White House Christmas tree.

If you enjoyed  this Franklin Pierce poem and would like to read more poems like this, go to our US President List page for links to US Presidents.