Presenting the Andrew Jackson poem, Man of the People, by Denise Rodgers. 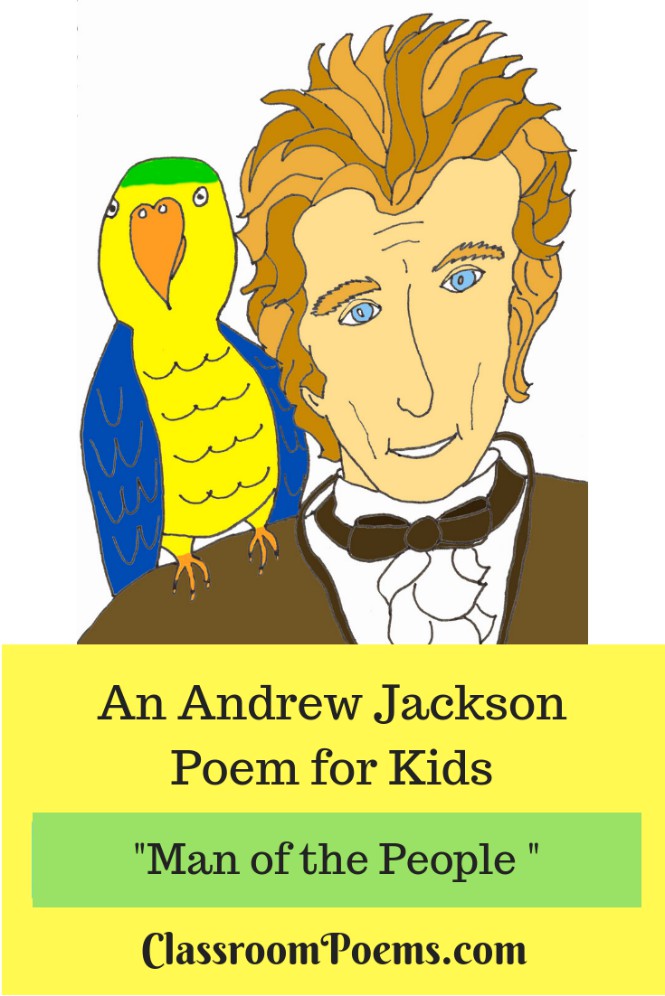 Man of the People
An Andrew Jackson Poem

A man of the people,
so common, so crude.
Or so said opponents
who thought he was rude.

They spoke of his parrot,
Named Polly, or “Poll.”
Did Polly know swear words?
Yes, she knew them all!

And Jackson was awkward
and said some words wrong.
Misused them, abused them
and yet he was strong.

Well-liked by the people
and not one to pose.
Would talk to all strangers
while dressed in old clothes,
his feet on his desk
and some chaw in his pipe.
He wasn’t refined.
No, he wasn’t that type.

He held office twice,
Both with zest and with zeal.
A man of the people,
so common, so real.

7th President of the United States

Born
March 15, 1757, somewhere in the wilderness in the then-uncharted territory of the Carolinas

This Andrew Jackson poem reflects many truths about this president. He was a popular guy, a man of the people. He was the first common man elected president. All presidents before him had been born to a privileged background. So many (certainly not all!) enjoyed that he was a self-made man. President Jackson believed that the White House belonged to the people, and that anyone at any time should be able to walk in and shake his hand. (Times have changed.) Because of this, he would often greet the public in old clothes, with his feet on his desk, smoking his favorite corncob pipe. To add to President Jackson’s down-to-earth image, his parrot, Polly, would “cuss” a blue streak. According to a report of a Reverend Norment, who either presided over or attended Jackson’s funeral, Polly gave Jackson an appropriately profane send-off, and had to be removed from the room!

Jacksonian Democracy
Andrew Jackson believed that ordinary Americans could make political decisions for themselves. He respected people from all walks of life, and is considered to be the first modern president of the United States.

Inauguration Scandal
Because of his belief in an open White House, Jackson invited the general public to his Inauguration festivities. This didn’t go well. The White House was mobbed. The drunken crowd broke chins, spit tobacco juice in the corners, and stood on sofas and chairs. This was expensive to repair, but Jackson did not change his beliefs.

Old Hickory
Andrew Jackson earned the nickname, “Old Hickory,” for being tough on the battlefield in the War of 1812, against British and native American troops. He carried a wooden walking stick and is reported to have beaten his would-be assassin with it during an unsuccessful assassination attempt in 1835.

Widower
Andrew Jackson’s wife, Rachel, died just a few days after the election, and she was buried in her inaugural gown. Jackson blamed the contentious presidential campaign during which Rachel had been labeled a bigamist. (She’d married Jackson the first time, not knowing that her first marriage had not been annulled. They were later remarried for legal and religious reasons.) Jackson grieved her loss for the rest of his life and never remarried.

Lots of Children!
While he didn’t remarry, Jackson did have a full family life! He and Rachel had adopted his nephew (Rachel’s sister’s child, one of twins), whom he and Rachel named Andrew Jackson, Jr. He and Rachel were also guardians to several children of General Butler (Caroline, Eliza, Edward, and Anthony). He and Rachel adopted a native American son, Lyncoya, who’d been found on the battlefield with his dead mother. While Jackson wanted this son to attend West Point, along with Andrew Jr., this wasn’t allowed at the time and Lyncoya instead became a saddle maker. The last of the adopted children was Andrew Jackson Hutching, a grandson of Rachel’s sister. Both of the boy’s parents had died by the time he was five, so the Jacksons took him in as their own.