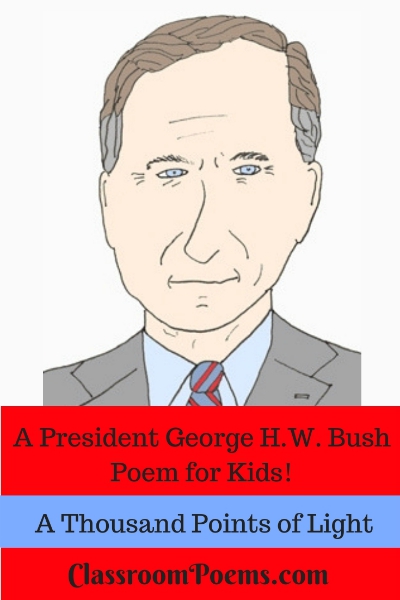 During his convention speech in 1988, George H.W. Bush said, "I envision a kinder, gentler nation like a thousand points of light in a broad and peaceful sky." And in his inaugural address, he encouraged Americans to act on their kindness by working and volunteering through community organizations. But during his presidency, there were many reasons to be strong and tough as well. After Soviet leader Mikhail Gorbachev announced the end of the Cold War, along with the withdrawal of Soviet troops from Eastern Europe, the world no longer had two super powers. George Bush declared this to be a "New World order." When Iraqi's Saddam Hussein's troops invaded Kuwait, George Bush led a coalition of international troops in Operation Desert Storm. This successfully pushed the Iraqis out of Kuwait. While this military action made him popular, a slow economy kept Bush from winning a second term in office.

* George Herbert Walker Bush was born June 12, 1924 to Prescott Sheldon Bush and Dorothy Walker Bush, in Milton, Massachusetts. When he was a long boy, his family moved to Greenwich, Connecticut. While his family was wealthy, his parents stressed modesty as well as public service.

* Bush attended Phillips Academy in Andover, Massachusetts, where he became captain of both the baseball and soccer teams, as well as the senior class president. He gradated the Academy on his 18th birthday and enlisted in the US Navy on the same day.

* Bush served in the US Navy through September 1945, and was the youngest pilot in the Navy in 1943. He flew 58 combat missions in the Pacific during WWII.

* On September 2, 194, his plane was shot down by the Japanese. He bailed out over the ocean and was rescued by a submarine. He was later awarded the Distinguished Flying Cross for heroism under fire.

* George Bush met  Barbara Pierce in 1941 at a Christmas party at a Greenwich, Connecticut country Club dance. They were married January , 1945, in Rye, New York, while he was still serving in the Navy.

* George and Barbara Bush had six children, among them were George Walker Bush, born in 1946, who was destined to become the 43rd US president, as well as Florida governor, John Ellis (Jeb) Bush, born in 1953.

* After discharge from the Navy in 1945, Bush enrolled at Yale University to study economics. There he became captain of he baseball team and a member of the elusive secret Skull and Bones society.

* After graduation, the Bush family moved to Odessa, Texas in 1948, where Bush worked as an equipment clerk at an oil company. In 1950, he and a friend formed an oil development company in Midland, Texas. This company then merged to form Zapata Petroleum. By 1954, Bush was president of a Zapata subsidiary that developed offshore drilling equipment. At this point, he relocated his family to Houston, Texas.

* In 1962, Bush became the Republican Party chairman in Harris County, Texas. His political life had begun.

* In 194, Bush ran for a US Senate seat and lost against Democrat incumbent Ralph Yarborough.

* In 1966, he ran for a seat in the House of Representatives from Houston's 7th District. He ran as a moderate Republican and won with more than 50% of the vote, and was re-elected in 1968.

* in 1970, Bush ran again for a US Senate seat by lost against Democrat Lloyd Bentsen.

* in December 1970, President Richard Nixon nominate Bush as  Ambassador to the United Nations.

* In 1973, Nixon removed Bush from the United Nations post and asked him to serve as chairman of the Republican National  Committee (RNC) because of his reputation of respectability and integrity.

* Nixon chose to resign in August of 1974, as without Republican support, he would be impeached by the House of Representatives and convicted by the Senate.

* When Gerald Ford took office after President Nixon's resignation, Bush stepped down as the head of the RNC. Ford then appointed Bush Chief of the US Liaison Office to the People's Republic of China.

* In 1975, President Ford asked Bush to serve as director of the Central Intelligence Agency (CIA). When Jimmy Carter won the 1976 presidential election, he declined Bush's offer to stay on as CIA director. The Bush family returned to Houston.

* Back in Houston, Bush campaigned unsuccessfully for the Republican presidential nomination in 1980. He lost to Ronald Reagan who later tapped him to be his Vice Presidential running mate.

* Bush was a moderate Republican as compared to Ronald Reagan's staunch conservatism, which is a likely reason he was chosen  to even out the ballot. While they had their disagreements, the two men lunched together weekly and over time developed a deeper relationship.

* As vice president, Bush traveled to represent the Reagan administration in international affairs. Bush was often involved in foreign policy discussions,  and also in domestic matters, such as federal  deregulation and an anti-drug program.

* In 1988, Bush won the Republican presidential nomination and chose Indiana Senator Dan Quayle as his running mate. He ran against Massachusetts governor Michael Dukakis and won 426 electoral votes to 111 for Dukakis.

* The world had suddenly changed as George Bush took office. The Cold War had ended and the Berlin Wall came down. The Soviet Union was no more, and Mikhail Gorbachev resigned.

* When Iraqi president Saddam Hussein invaded Kuwait and threatened Saudi Arabia, Bush took action. He rallied the United Nations,  the US public, as well as Congress, and sent some 425,000 troops who were joined by 118,000 more from allied nations. After several weeks of air and missile bombardment, the battle, named Desert Storm, was won by the US and its allies.

* While the Desert Storm victory made Bush popular in the polls, domestic issues such as the  slow economy, inner-city violence and high deficit spending led to his 1992 loss to Democrat Bill Clinton.

After the White House:
Facts to Support the George H W Bush Poem

* After his loss to Bill Clinton, the Bushes returned to Houston. There he volunteered at his church and sat on the boards of several organizations. They  divided their time between Houston and the Bush summer home in Kennebunkport, Maine.

* Bush worked on his presidential library, the George Bush Presidential Library and Museum, dedicated in 1997 on the west campus of Texas A&M University in College Station, Texas.

* In  2005, Bush joined forces with Bill Clinton, creating the Bush-Clinton Tsunami Fund, a national campaign to raise money for victims of the Indian Ocean Tsunami that struck Southeast Asia in 2004.

* When George W. was elected president in 2000, Bush and his son were the first father-son team to both serve as President of the United States since John Quincy Adams was elected in 1824.

* George Bush died November 30, 2018 at the age of ninety-four, just seven months after his wife, Barbara died. They are both buried at the George H.W. Bush Presidential Library in College Station, Texas, along with their daughter, Robin, who died of leukemia in 1953.

If you enjoyed this George H.W, Bush poem, please go to our US Presidents page for links to poems about the other US presidents. For more information about George H.W. Bush, go to the MillerCenter.org.