Please enjoy this President Ronald Reagan poem, Tear Down this Wall, by Denise Rodgers, along with facts about the 40th president of the United States. 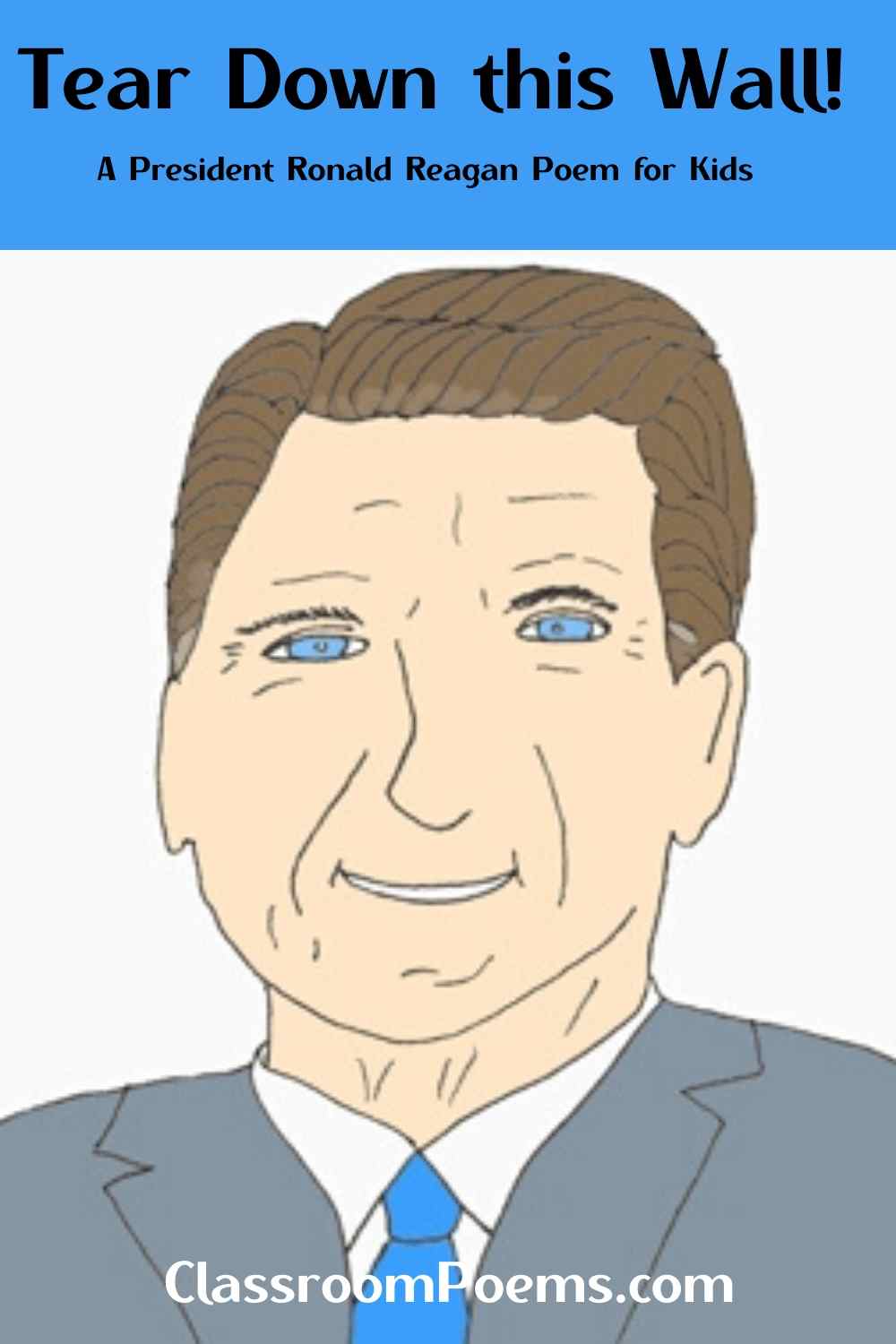 TEAR DOWN THIS WALL!
(a President Ronald Reagan Poem)

"Mr. Gorbechav, tear down this wall!"
Those were his words
and those words said it all.
He felt, with conviction, right down to his core,
that speaking his truth could destroy the Cold War
without a shot fired, with no bloodshed or death,
the man spoke his mind while the world held its breath.

The world's a changed place now.
This man held his ground.
The ultimate win:
that wall did come down!

Facts about the Ronald Reagan Poem

Ronald Reagan was a self-described conservative Republican. He believed in and implemented lower taxes, increased defense spending, and reduced spending on social programs. He was also openly and adamantly anti-Communist and referred tot the Soviet Union as the "Evil Empire." His Strategic Defense initiative, or Star Wars program, is credited with encouraging the Soviet union to give up on the arms race and to "tear down" the Berlin Wall that divided communist East Germany from democratic West Berlin. The wall did eventually come down during the early days of the George H.W. Bush presidency, shortly after the end of Ronald Reagan's second term in office.

* Ronald Wilson Reagan was the second of two sons born to Nelle and John Reagan in Tampico, Illinois. The family moved to Dixon, Illinois, where Reagan attended high school and graduated in 1928.

* As a lifeguard from 1926 - 1933, he rescued some seventy-seven people while working at Illinois's Rock River park.

* After graduation, he took a job as a radio sports announcer in Davenport, Iowa.

* In 1937, Reagan took a screen test and was awarded a Hollywood acting contract. Over a 20-year acting career, Reagan appeared in some 53 films to good review. The role that made him famous was starring as football star George Gipp in the movie, Knute Rockne-All American.

* Reagan was disqualified from serving for the armed services during World War Two due to poor eyesight. Instead he worked on training films for the military.

* Reagan was president of the Screen Actors Guild from 1947 to 1952, and again in 1959. The investigations into communist activity in the film industry was the focus of his attention, and this is when Reagan became strongly anticommunist in belief.

* Unhappy with the roles he was offered in film, Reagan turned to television. In 1954, General Electric signed him on as host of the their weekly dramatic series, the General Electric Theater.

* GE sent Reagan on personal appearance thus, speaking at GE factories across the country. Over the years he perfected his presentation which became a salute to private enterprise and an anticommunist message, along with a GE product sales pitch.

* In 1962, Reagan switched parties and became a registered Republican.

* Reagan made  an unsuccessful bid for the Republican presidential nomination in 1968.

* He won re-election to the governor's office in California in 1970, as the state was in sound financial condition.

* In 1976, Reagan ran — and lost — against President Gerald Ford in the Republican presidential primaries. Although he didn't make it to the general election, he had established himself as a serious presidential contender.

* Reagan was nominated president on the Republican ticket in 1980 and chose George H.W. Bush as his running mate.

* Reagan won the presidential race against Jimmy Carter, 489 electoral votes to 49 for Carter. Voters had been disenchanted with President Carter's term which included inflation and the year-long Iran hostage crisis. Reagan also decisively won the presidential debates against Carter, leading into the general election.

* At 69 years of age, Reagan was the oldest president elected up to that time. (Donald Trump now holds that record.)

* At his inaugural address, Reagan spoke out against big government, saying that "government is not the solution — it is the cause."

* Just 69 days into his first term, Reagan was shot in an assassination attempt by John Hinkley. He recovered and returned to office. His spirit and foxy during recovery endeared him to the American public. His popularity and approval rating went through the roof.

* In 1981, he appointed Sandra Day O'Connor as the first woman to serve on the United States Supreme Court.

* As president, Reagan cut taxes and government spending, especially cutting social program, while at the same time strengthening the national defense. HIs plan led to a large national deficit and the country went into recession, with inflation dropping to two percent, and unemployment rising to almost eleven percent.

A Second Term:
Facts to Support the Ronald Reagan Poem

* Reagan won his presidential re-election bid for a second term in 1984 with a decisive 525 electoral votes to former Vice President Walter Mondale's 13.

* By the end of his second term, it appeared his economic program was a success. The US was in the longest peacetime era of prosperity without a recession or depression in the nation's history.

* Ronald Reagan believed in peace through strength. Over his two terms in office he increased defense spending by some thirty-five percent.

*In March 1983, Reagan announced his Strategic Defense Initiative, popularly known as his Star Wars defense, as a program to defend the US from nuclear attack.

* In 1987, Reagan engaged Mikhail Gorbachev, General Secretary of the Communist Party of the Soviet Union in talks to create an historic treaty to reduce nuclear threat between the two nations. That year, Reagan spoke at Germany's Berline Wall, a symbol of Communist oppression, and challenged Gorbachev to tear it down. Twenty-nine months later, Gorbachev did just that. For this reason, Ronald Reagan is credited with being instrument in facilitating the end of the Cold War with the Soviet Union.

* During Reagans' second term, there was a scandal about Iranian arms sales. The US was secretly selling arms to Iraq, despite an embargo of arms sales. The weapons were sold in an effort to effect release of hostages in Lebanon. The three hostages held by Lebanese were released, but unfortunately three more were quickly taken. The arms were sold at inflated prices and the proceeds were used to buy weapons for the Contras in Nicaragua. These arms sales, which were supposed to be approved by Congress, were hidden from Congress and the American people.

After the Presidency:
Facts to Support the Ronald Reagan Poem

* After his second term was over in 1989, Ronald and Nancy Regan returned to their home in Los Angeles. In 1991, the Ronald Reagan Presidential Library opened in Simi Valley, California.

* In November 1994, Reagan wrote a handwritten letter to the American people revealing he'd been recently diagnosed with Alzheimer's disease.

* He lived another ten years and died at age 93 from pneumonia on June 5, 2004.  After a state funeral in Washington, D.C., he was buried on the grounds of the presidential library.