Please enjoy this Harry Truman poem, Out of the Loop, by Denise Rodgers. 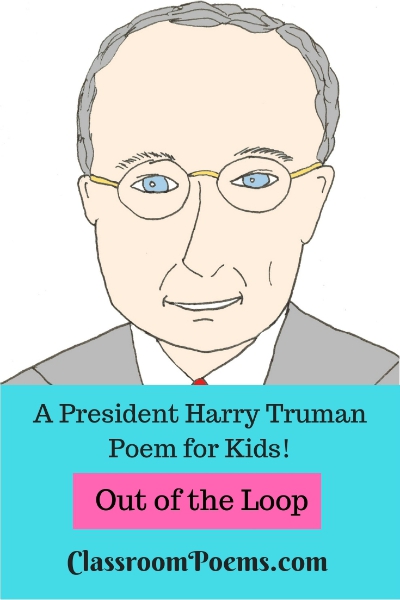 OUT OF THE LOOP
A President Harry Truman Poem

When Truman took office,
well, here is the scoop,
the man was quite clueless
and out of the loop.
Not briefed on the A-bomb
or facts of the war.
Left out of memos,
and meetings, and more.

It was a problem,
a bit of a worry
to learn to be president —
and in a hurry!
He dropped both the A-bombs,
and World War II ended.
But snap! In a moment
the Cold War descended.

Then building up Europe,
priority one.
The job was completed,
Yet he was not done.
Reforms on the homefront
became his idea
'til war struck again —
this time in Korea.

He had much to learn,
much to know, much to grasp.
Truman learned well
and he learned very fast!

Facts about the Harry Truman Poem

When FDR died on April 12, 1945, Harry S. Truman, his vice president, instantly became the 33rd president of the United States. Roosevelt hadn't shared much information with his vice president. Truman was  uninformed about everything — including the Atomic bomb! However, Truman learned quickly. After his difficult decision to drop the nuclear bombs on Hiroshima and Nagasaki, the war quickly ended. Then the task of rebuilding Europe began, along with the new Cold War with the Soviet Union. Truman was a "take charge" kind of president. He kept a sign on his desk that read, "The buck stops here." That meant that he recognized that he was the man ultimately responsible for all White House decisions.

The Early Years:
Facts to Support the Harry Truman Poem

* Born in Lamar, Missouri, Harry Truman was the first of three children and did not attend college. After high school, he held several different jobs, including the position of a time keeper for a railroad construction company. For a time, he was a clerk at one bank, and was also a bookkeeper at another. After five post-high school years, Truman returned to the family business of farming.

* When World War I broke out, although he had two possible military exemptions, Truman volunteered to serve in the Missouri National Guard.  He helped organize his regiment which was called into service. While he was a shy and modest man, he gained the respect of his men and led them successfully in artillery fights in France.

* When he returned home from battle after World War I was through, he married his childhood sweetheart, Elizabeth (Bess) Virginia Wallace, and they had one daughter,  Mary Margaret. He opened a men's clothing and accessory shop with a partner.  When the business failed, he refused to file bankruptcy, and instead  paid back all loans over a fifteen-year period.

* Truman was active in the Democrat Party, and because of his involvement was elected a judge of the Jackson City Court in 1922.

* He was elected to the Senate in 1934, and served on the Senate Appropriation Committee, allocating tax dollars for Roosevelt's New Deal programs. He was also on the Interstate Commerce Committee. In 1940, he initiated legislation for tighter regulation of the nation's railroads, establishing a reputation as a man of integrity.

* During World War II, he headed the Senate Special Committee, checking into waste and corruption in military spending, and ultimately saving the country as much as $15 billion, according to White House records. This made Truman a national favorite, giving him both gravitas and name recognition.

* Franklin Roosevelt saw Truman as the ideal running mate for his 1944 election. Truman was politically popular, fiscally responsible, and seen as a defender of citizen rights. They handily won the 1944 election, and Truman took oath as Vice President of the United States on January 20, 1945.

* Truman was in office for a mere 82 days when President Roosevelt died of a  massive stroke. He was sworn in as president the same day as Roosevelt's passing, April 12, 1945.

* With zero foreign policy experience, Truman was overwhelmed. In the first six months of his presidency, he announced German surrender, dropped two atomic bombs on Japan, and signed the charter ratifying the United Nations.

* After V-E Day (Victory in Europe), the US urged Japan to surrendered. Japan refused. After consulting with advisers, Truman ordered two atomic bombs be dropped on cities crucial to Japan's war efforts -- Hiroshima and Nagasaki. After this nuclear attack, Japan quickly surrendered.

* The Cold War Begins. While the Soviets under Stalin were allies during the war, the situation completely changed when the war ended. The Soviets wanted control of Eastern Europe, while the Eastern European countries wanted to return to their pre-war status. This, along with exclusion of the Soviets from reconstruction of Asia, paved the path to the Cold War.

* In 1947, the Soviets threatened to take over Turkey and Greece. Truman asked Congress to aid both countries under the Truman Doctrine, the Truman Doctrine being that the US would provide political, military, and economic aid to all democratic nations under threat from internal or external authoritarian forces.

* In an upset win, Truman won the election of 1948. He was not expected to win, as he'd lost voter support in the mid-term election, and both houses of Congress were Republican. The Chicago Tribune famously reported Republican opponent Dewey's win quite ahead of the fact. Truman triumphantly held the false headline up for the press photographers after his victory at the polls.

* The Marshall Plan, named for Truman's Secretary of State, was a 1948 US initiative to help rebuild Western Europe. Over $12 billion was devoted to this project. (This would be roughly $100 billion today.)

* The Berlin Airlift was Truman's effort to aid Berliners, in 1948, with delivery of food and vital supplies, in conjunction with the British. The Russians had blockaded two million citizens of the western section of Berlin. This was one of the earlier crises of the the Cold War. Because of this aid, the blockade lasted eleven months.

* The Korean War. War broke out in Korea in June of 1950, as the communist North invaded the democratic South. Truman quickly committed troops, seeing the invasion as a challenge from the Soviet Russians and the Chinese. Truman's first strategy was to take over the North and create one democratic Korea. However, when China dispatched 300,000 troops, Truman fell back to a containment strategy, maintaining democratic independence of South Korea, rather than eliminating communism. This was an effort to avoid another large-scale war with China and, possibly, Russia.

* Harry Truman did not run for a third term. Instead, he retired to Independence, Missouri in 1953 to write his memoirs and oversee the construction of his presidential library. He died December 26, 1972, at the age of eighty-eight. He is buried beside his wife, Bess, in the courtyard of the Truman Library.

If you enjoyed this President Harry Truman poem and would like a link to a poem about each president of the United States, go to USPresidentsList. For more information about Harry Truman, go to WhiteHouse.gov or History.com.