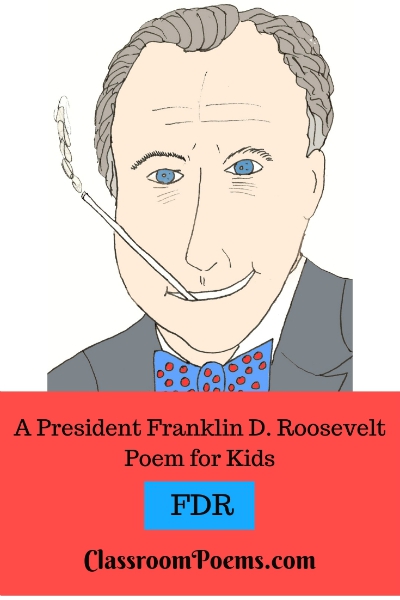 Oh, what a mess our country was in!
But then came the man with the wide, jaunty grin.
His hat tipped aside and his limp not in sight.
He came just in time to expel the great fright.

He led some reforms and the new CCC,
corps of men, glad to work, and their work was a key.
Building dams. Building parks. And the new TVA,
bringing power to people in modern, new ways.

All his plans took effect, eased the country's great pain.
The people worked hard; there was visible gain.
And though it improved, his work was not through.
But then came Pearl Harbor,
And then, World War Two.

And soldiers set off, trained to fight far from home.
(But that is a tale for a whole 'nother poem.)

Facts about the Franklin Roosevelt Poem

Franklin D. Roosevelt was the first and only four-term president. Well beloved by the people, he served during most of the Great Depression and also during most of World War Two. When he first came to office, he immediately worked to improve conditions. His New Deal programs put people to work. In his inaugural address, he told Americans: "The only thing we have to fear is fear itself."  Roosevelt hid the fact that he was disabled by polio. Disabilities were not as well understood or accepted during this time in history, a fact not revealed in the Franklin Roosevelt poem, above.

* Franklin Delano Roosevelt was born January 30, 1882, the only child of wealthy parent who owned a large estate in the village of Hyde Park, New York. He was educated by private tutors and attended the elite schools, Groton and Harvard. He greatly admired his fifth Cousin, Theodore Roosevelt who was elected president in 1900.

* In college, Roosevelt met Anna Eleanor Roosevelt. She was Theodore Roosevelt's niece, as well as Franklin Roosevelt's own distant cousin. They married in 1905 and had six children, one of whom died in infancy.

* After graduating Harvard, Roosevelt attended law school at Columbia and worked as a law clerk in a Wall Street law firm.

* Following in his fifth cousin's footsteps, Roosevelt entered politics, wining a state senate seat as a Democrat in 1910. President Woodrow Wilson appointed him Assistant Secretary of Navy in 1913, putting him into the national political arena. By 1920, he was the Democratic nominee for Vice President, but he and his running mate, James M. Cox, lost.

*  In the summer of 1921, at the age of thirty-nine, Roosevelt was stricken with polio. He fought to regain use of his legs with vigorous exercise, particularly swimming. In a dramatic moment, he appeared on crutches at the 1924 Democratic Convention to nominate Alfred E. Smith, who did not win.

The Great Depression: Facts to
Support the Franklin Roosevelt Poem

* By 1933, the Great Depression was in full swing. Thirteen million Americans were out of work and almost every bank was closed. Roosevelt had his work cut out for him.

* During his first 100 days in office, Roosevelt laid out his ambitious New Deal programs. The goal: to bring the nation to economic recovery for business, agriculture, relief to the unemployed, and to those in danger of losing farms and their homes. During this time, he established the TVA, the Tennessee Valley Authority, solving problems in the area such as flooding, bringing electricity to homes, and replanting forests. Of course, this was also an effort to provide jobs for the unemployed.

* Roosevelt easily won election in 1936, 1940, and 1944. He was the only president to serve more than two terms. The Twenty-Second Amendment, limiting presidential service to two terms or a total of eight years, was passed by Congress in 1947, and ratified by the states in 1951.

* By 1935 the nation had somewhat recovered from the Depression, but business and banking communities were turning against Roosevelt's New Deal. They did not like that the  US was off the gold standard and that federal budget deficits were now allowed. They also were against enforced labor concessions.

*Roosevelt ignored his detractors and added new reforms, such as Social Security, heavier taxes on the wealthy, new controls over banks and public utilities, and more work relief programs for the unemployed.

* In 1936, Roosevelt was re-elected by a wide margin. Feeling he had a mandate, he sought to enlarge the Supreme Court which had been thwarting some of his policy plans and New Deal programs. While he lost his bid to stack the court, he did have a lasting effect on the United States economy, which could now be legally regulated by the government.

* Despite Roosevelt's desire for neutrality in the war in Europe, when England and France were under siege in 1940, he initiated the Lend Lease program. This made it possible for  the US to send all the military equipment and supplies possible to Great Britain between 1941 and August 1945. This was an effort to lend military aid short of actually entering the war. There was an agreement that the US would be paid back after the war.

* This purported neutrality ended when the Japanese attacked Pearl Harbor on December 7, 1941, which Roosevelt famously named "the day of infamy." The US declared war on the Axis powers of Japan, Germany, and Italy. Under Roosevelt's direction, massive spending began as US factories were retooled for the war effort. .

* Throughout his presidency, Roosevelt met with the public over the radio with his "fireside chats," making him a virtual guest in Americans' homes. People would stop what they were doing to sit by the radio and listen to the president speak.

* Roosevelt spearheaded the wartime alliance with Winston Churchill of Great Britain, and Joseph Stalin of Russia. The three met in Casablanca and then in Tehran.  At the Yalta Conference, Roosevelt secured Stalin's commitment to enter the war against Japan, as it was evident Germany would soon surrender. At this Conference, the three men laid groundwork for the creation of the United Nations, in an effort to settle international disputes peacefully.

* After the Yalta Conference, Roosevelt was weak from the strain of leading the country through the Depression and then World War II. He traveled to his cottage retreat in Warm Springs, Georgia, where he'd set up a foundation to aid polio victims. He died of a cerebral hemorrhage on April 12, 1945. He was sixty-three years old.