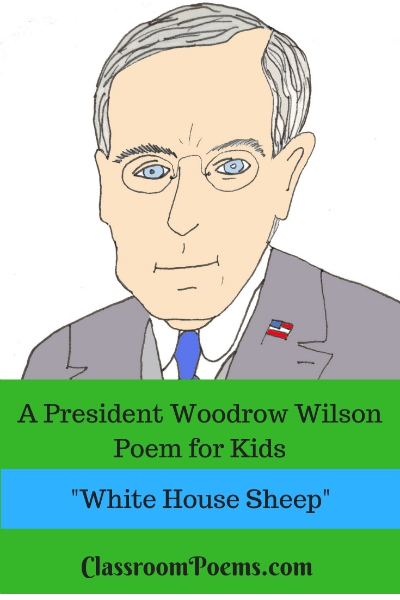 The Great War was raging,
the White House engaging
the nation to ration out fuel.
So Mondays were meatless
and Tuesdays were wheatless.
On Sundays, no gas was the rule.

The North Lawn was growing.
The grass needed mowing.
The Wilsons brought in White House sheep
who spent all their days
in a slow, endless graze
'til the White House looked good on the cheap.

Facts about the Woodrow Wilson Poem

The US entered World War I (then called the Great War) at the start of Woodrow Wilson's second term. As part of the war effort, Americans were having meatless Mondays, wheatless Tuesdays, and no gasoline on Sundays. As an additional austerity measure, First Lady Edith Wilson brought  in sheep to graze the front lawn of the White House to save the cost of mowing. She was also proud of the $100,000 raised for the Red Cross when the sheep's wool was sold at auction.

The Early Years:
Facts to Support the Woodrow Wilson Poem

* Woodrow Wilson was born Thomas Woodrow Wilson on December 28, 1856. His mother gave birth at their home. His father was a Presbyterian minister. At some point in his life, Wilson dropped his first given name and became known only as Woodrow Wilson.

* His early education was strictly home schooled -- some by former Confederate soldiers, but mostly at the hand of his religious father.

* Wilson graduated the College of New Jersey, later to be called Princeton University. He studied law at the University of Virginia, but dropped out in his second year. He then studied on his own and passed the bar exam in Georgia. Unfortunately, he discovered he did not enjoy the practice of law.

* Next, he enrolled in graduate studies in history and political science at Johns Hopkins in Baltimore, where he earned his Phd.

* Wilson married Ellen Louise Axson during his last year of graduate school. The two had much in common, as she was also the daughter of a Presbyterian minister.

* He taught at Bryn Mawr College in Pennsylvania from 1885 - 1888. He then taught history at Wesleyan University in Middletown, Connecticut. After that, he went on to teach law and political economy at Princeton, in New Jersey.

* During his academic life, he published ten books on history and government.

* In 1902, he was selected and served as President of Princeton University.

* If the Democrat party stalwarts of New Jersey were expecting Wilson to be their puppet, they were in for a shock. Wilson was his own man and relished the opportunity to have what he felt was a positive impact on society.

* One of the first changes he influenced was the institution of direct party primaries. State candidates were required to file campaign financial statements, and corporate contributions to political campaigns were outlawed.

* During his governorship, a public utility commission was established, as well as worker's compensation to help families of workers injured or killed on the job. He also held daily press conferences in an effort to have an open administration.

* All these efforts and changes made a positive impression on the national Progressive Democrat leaders. This led to his presidential nomination in 1912.

The Presidential Years:
Facts to Support the Woodrow Wilson Poem

* Woodrow Wilson was nominated president in 1912 at the National Democrat Convention. He campaigned on the theme of individualism and states' rights. Because it was a three-way race against William Howard Taft (Republican) and Theodore Roosevelt (Bull Moose party), he won by only 42% of the popular vote. However, he won the electoral vote more decisively.

* Wilson got busy as president putting his governmental theories into practice. With the cooperation of Congress, he lowered tariffs, instituted the Underwood Act which included graduated federal income taxes, and passed the Federal Reserve Act which provided the government with an elastic money supply. In 1914, antitrust legislation passed, including the creation of the Federal Trade Commission to prohibit  unfair business practices. In 1916, Child Labor Laws were passed, as well as a law to limit railroad workers to an eight-hour day.

* Using the slogan "He kept us out of war," Wilson narrowly won re-election to his second term.

* However, on April 2, 1917, Wilson asked Congress for a Declaration of War against Germany. This was because of Germany attacks on one of country's closest allies, Great Britain. He declared the war would make the world "safe for democracies." By 1918, more than one million US troops were stationed in France and Belgium.

* Wilson spoke to a joint meeting of Congress on January 8, 1918, presenting the Fourteen Points, his vision to end World War One and create a lasting peace.

* After Germany signed the Armistice in November of 1918, Wilson traveled to Paris to try and build a lasting peace. After returning to Washington, he presented the Senate with  the Versaille Treaty which contained the Covenant of the League of Nations. Because of isolationist sentiment, this treaty did not pass Senate vote.

* Because of his ailing health, Wilson's doctor advised him against his planned national tour to promote the Versaille Treaty. He suffered a stroke from which he never totally recovered. His second wife, Edith shielded him from White House duties, pre-screened all incoming information, in fact she effectively ran the executive branch of the United States for the rest of his term. He lived till 1924.

* Woodrow Wilson was awarded the Nobel Peace Prize in 1919 as the leading architect of the League of Nations.

For more Woodrow Wilson facts, go to WhiteHouse.gov or MillerCenter.org. If you enjoyed this President Woodrow Wilson poem, go to USPresidentsList for links to poems about other US Presidents.