Please enjoy this Theodore Roosevelt poem, The Man Who Lived So Much, by Denise Rodgers. 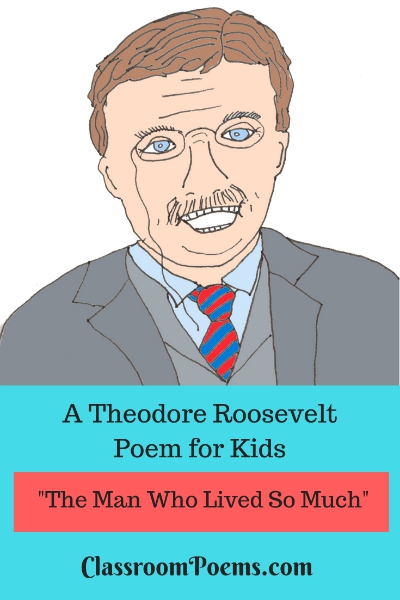 THE MAN WHO LIVED SO MUCH
A Theodore Roosevelt Poem

They called him Teddy
and he was ready
to take McKinley's place.
He chose to bust
large business trusts.
He led with style...Not grace.

His manner bold
when all was told,
as solid as a brick.
Let critics squawk,
he talked tough talk
and carried his big stick.

He lived his way,
laughed every day,
sometimes until he'd roar.
Won one more term
and then held firm
and did not run once more.

He's one of four
on Mount Rushmore.
This shows his lasting touch.
He did his best,
so filled with zest;
the man who lived so much.

Facts about the Theodore Roosevelt Poem

Theodore Roosevelt truly was larger than life and enjoyed all his years as president. He established US world leadership with his "big stick" foreign policy. His motto was "talk softly and carry a big stick." This mean that he felt the US would get its way if other countries understood US military strength. A well-liked president, he challenged business trusts (a form of monopoly) while also managing to be a friend of both business and labor. Roosevelt was a robust man who believed in exercise and laughing every day. He always made time to play with his six children, whom he called his "little bunnies." As a lasting tribute, Roosevelt's image is third from the left on Mount Rushmore in South Dakota.

* Theodore Roosevelt was born to to a wealthy New York family, but did not have an easy childhood because of his health. He had asthma as a child, and was told by a doctor that he also had a weak heart. Instead of leading a quiet life as the doctor recommended, Roosevelt abided by his father's wishes and instead took up boxing and weightlifting. This attitude worked well for Roosevelt, and he lived with a robust attitude towards life his entire lifetime.

* Roosevelt was enrolled at Columbia law School, but didn't stay long. He started his political career in the New York State Assembly as a New York City representative, not so incidentally becoming the youngest to ever serve in that position.

* On February 14, 1884, his mother and his first wife, Alice Lee, both died on the same day. His mother died of typhoid fever, and his wife of Bright's disease and complications following the birth of their first child just two days earlier.

* After this tragic day, Roosevelt left his infant daughter in the care of his elder sister, and spent the next two years of his life on his ranch in the Badlands of Dakota Territory, living large in the great outdoors.

* Roosevelt married second wife and childhood friend,Edith Kermit Carow in 1886, and at this time resumed his political career.

* Roosevelt left his political career to take part in the Spanish-American War. He organized a volunteer cavalry known as the Rough Riders. He led them in a successful charge up San Juan Hill in 1898, making him a popular war hero. He was nominated for the Medal of Honor. This popularity led to his election as first the Republican candidate and then the Governor of New York in 1898.

* Because the New  York Republican party bosses did not like his political stances, they worked to have him nominated as Vice President to William McKinley. Traditionally, Vice Presidents have little impact on national policy. This plan obviously backfired.

The Presidency: Additional Facts to Support
the Theodore Roosevelt Poem

* Roosevelt's first term in office came as the result of McKinley's assassination. Popular as the "accidental" president, Roosevelt happily won election to his second term with a landslide victory in 1904. At the time, he said to wife, Edith, "My dear, I am no longer a political accident."

* Roosevelt was well prepared for the job. He was well-traveled, well-read at three books each night, and he loved strenuous exercise, including hiking, swimming, hunting, and boxing. As president, he boxed regularly with professional sparring partners, and invited political rivals to a "friendly" round of boxing. This gave him a well-deserved reputation of being a tough president.

* Roosevelt considered himself to be a progressive Republican. This meant that he was both pro-business and pro-labor. Not many could pull this off, but Roosevelt did, and this was the reason he was so widely admired and appreciated.

* Roosevelt added the West Wing of the White House as he said it was too small for his large family. He employed one of the top architects to renovate and renew the entire structure. As a matter of fact, it was during his term that the presidential mansion became officially named the White House. To make this matter complete, Roosevelt had these words imprinted on the presidential stationary.

* Roosevelt established US world leadership. He was instrumental in the construction  of thePanama Canal. His goal was to prevent foreign military bases in the Caribbean and also made it call that he US reserved the sole right of intervention in politics of Latin America.  Critics felt this stance could lead to Us imperialism.

* Theodore Roosevelt was awarded the Nobel Peace Prize in 1906 for negotiating the Russo-Japanese War of 1904-1905.

* A champion of conservation, Roosevelt added to the National Forests in the West, reserving land for public use.

* Theodore Roosevelt had a big personality and was an engaging speaker, often pounding his fist as he spoke in his high-pitched voice.

* An outdoor enthusiast, Roosevelt would often lead his five younger children, as well as ambassadors, on hikes through Rock Creek park in Washington, D.C.

* After leaving office in 1909, he went on an African Safari. This was so Teddy Roosevelt!

* Theodore Roosevelt was the first president to fly in an airplane, although this took place after his second term in office was over, in October, 1910. The aircraft was an early Wright Flyer at Kinloch Field in St. Louis, Missouri.

* In 1912, he ran for president again on the Bull Moose ticket. While campaigning, he was shot in the chest by a fanatic. Although he lived another seven years, at the time of the shooting he summed up his life. "No man has had a happier life than I have led; a happier life in every way."