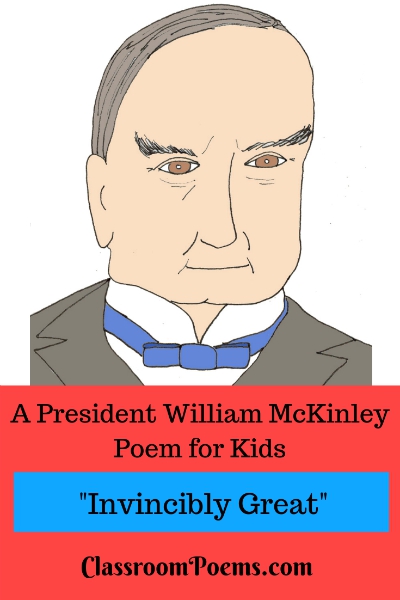 By the time of the Spanish-American War,
Americans knew what real power was for.
It started in Cuba — "Remember the Maine!"
A ship bombing started the war against Spain.

Half 'round the world, in an effort complete
the US sent over the national fleet.
And when it was over, that summer, that day,
the US had reign over Manila Bay,
the Philippines, Guam, Puerto Rico and more...
The US had annexed the Hawaiian shore.

All in one summer of late '98,
the US had power, invincibly great.
The nation took risks, had imperial gain.
To think it all started with war against Spain.

Facts about the William McKinley Poem

During William McKinley's presidency, the United States became more of a world power. It started to exert authority over other countries by show of force. During the Spanish-American War, the US destroyed the Spanish fleet in Cuba, seized Manila in the Philippines and occupied Puerto Rico in the Caribbean Sea. McKinley later annexed the Philippines, Guam and Puerto Rico to the US. Hawaii was also annexed to the US during the McKinley administration.

* McKinley had a warm and engaging personality and was well liked. He was politically conservative and had a hands-off, pro-business policy.

* McKinley served fourteen years in Congress where he was the leading Republican tariff expert. In 1891 he was elected Governor of Ohio. He served as governor for two terms.

* William McKinley was the fifth president from Ohio in twenty-eight years.

* McKinley was the first president to ride in an automobile.

* McKinley's second term ended tragically when he was shot twice in the abdomen while standing in a receiving line at the Buffalo Pan-American Exposition. The crowd gathered around the assassin, anarchist (and most likely mentally ill) Leon Frank Czolgosz. As the crowd began to beat the assassin, McKinley shouted out, "Boys! Don't let them hurt him!"

* McKinley's commanding officer during the Civil War was Rutherford B. Hayes, the 19th president of the United States.

* William McKinley had a pet parrot named 'Washington Post,' who apparently could whistle the tune, 'Yankee Doodle.' Unfortunately, we have no video of that!