Please enjoy this William Howard Taft poem, The Lonesomest Place in the World, by Denise Rodgers. 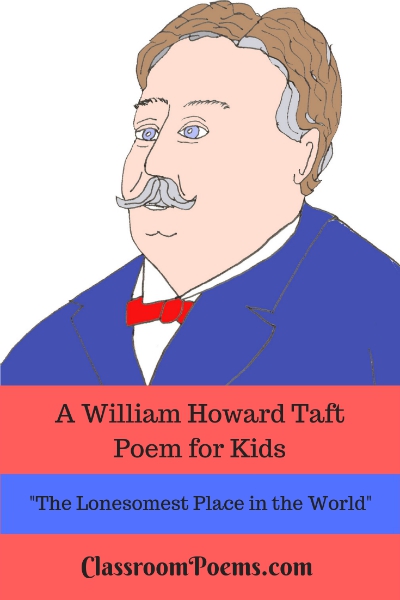 Unhappy in office, he just wasn't ready
to follow the footsteps of popular Teddy.

Commander-in-chief, when the flag was unfurled,
the White House, "the lonesomest place in the world."

He did his true best. It did not to the trick.
He's quoted as saying the job "makes me sick."

He lasted one term, which was not a surprise
and ten full years later, he won his grand prize.

when President Harding, to show his support,
appointed him chief of the grand Supreme Court.

There he was suited to all that he tried,
and happily worked till the day that he died.

Handpicked by Theodore Roosevelt to be his successor, Taft found the job of being president lonely and unfriendly. It was hard to follow in the footsteps of such a dynamic personality, and while he was hand-selected, his political views were not identical to his predecessor. It was no surprise that he lost election to his second term and it is no secret that Taft found this to be a great relief. It was ten years later that President Warren Harding appointed him Chief Justice of the Supreme Court. This position was a perfect fit and Taft served there for the rest of his life.

* Taft was born the son of a prominent attorney and judge. In fact, his father served as Secretary of War under Ulysses Grant and as an ambassador under President Chester Arthur.

* Taft graduated Yale and returned to Cincinnati to follow in his father's footstep to study and practice law.

* Taft preferred his law practice to politics, and served as a Federal Circuit Judge at 34.

* In 1900, Taft was sent by President McKinley to act as the Chief Civil Administrator of the Philippines. There he helped improve the economy, build roads and schools, and also gave the locals some government participation.

* He was appointed Secretary of War under Theodore Roosevelt in 1907. While he served in this capacity, Roosevelt decided that he should be his successor in the White House.

* During the 1908 Republican Convention, Taft was nominated president.

* Taft did not enjoy the campaign, calling it the most uncomfortable four months of his life.

* During Taft's presidential term, there was a split in the Republican party. While he had run as a Progressive  to follow in Theodore Roosevelt's footsteps, he was more of a Conservative at heart. This led to decision that upset, angered, and annoyed half his party base. This did not sit well with Roosevelt who broke from the party in 1912 and ran as a progressive in his Bull Moose Party. This effectively gave the election to Democrat Woodrow Wilson.

* Accomplishments during the Taft administration includes the initiation of eighty antitrust lawsuits against large industrial conglomerates. While this was twice as many as done in the Roosevelt administration, Taft eventually backed away from this effort as he felt more aligned with the conservative faction of his party.

* Taft weighed as much as 332 lbs. at his inauguration. He got famously stuck in the White House bath tub. The tub was later replaced with a larger model to accommodate his girth.

* Taft was nicknamed Big Bill (for obvious reasons; read above), and Sleeping Beauty, as he slept through funerals and other daytime events, and even through a typhoon while stationed in the Philippines. There is some speculation he suffered from sleep apnea.

* Two of the White House pets during the Taft administration include Wooly Mooly, and later, Pauline. These cows supplied milk and butter for White House consumption.

* The Tafts also had a dog, Caruso, given to the Taft's daughter, Helen, by famous opera singer, Enrico Caruso. Young Helen Taft named the pooch.

* Taft was the first president to also serve on the Supreme Court, and the only one to be both president and chief justice.

* Taft wrote some 250 court decisions during his Supreme Court tenure. He remained in this position until shortly before his death from complications of heart disease in March, 1930.