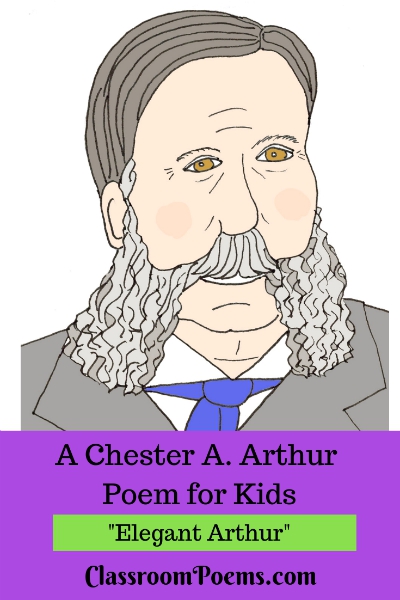 Elegant Arthur had style sense quite keen,
with mutton-chop sideburns and chin shaven clean.
He owned eighty pants, some historians say,
and changed several times in the course of a day.
See him three times and he'd not dress the same.

Facts about the Chester Arthur Poem

Chester A. Arthur was President James Garfield's vice president and so became president after Garfield's untimely death. Arthur had been known for forcing campaign contributions from government employees in his former position as duty collector for the Port of New York. Because of this, people did not expect him to be an honest president. However, after he came into office, he had a change of heart and worked to reform and improve government.

*In 1871, President Ulysses S Grant named Arthur the customs collector for the Port of New York. In this position, Arthur presided over 1000 employees, from whom he demanded campaign donations -- whether they wanted to or not.

* Arthur was removed from this Port of New York position by President Rutherford Hayes in Hayes' effort to reform the corrupt system.

* Because of his political connections, he was elected the vice presidential nominee to James Garfield in 1880, and became president as a result of Garfield's assassination.

* Arthur surprised everyone--and angered his former political cronies-- by becoming a reformer himself, once president. In 1883, he signed the Pendleton Act requiring civil service jobs to be awarded on merit rather than by political favor.

* Once president, Arthur hired Louis Comfort Tiffany to redecorate the state rooms of the White House. More than twenty loads of furnishings from previous presidencies were auctioned off. (They would all have made content for a fascinating museum!)

* Because of his abolitionist beliefs, he joined the Republican Party, which had been formed in 1854 by the anti-slavery movement.

* As a lawyer in New York, he won a landmark case against the New York streetcar system, leading to the desegregation of public transportation in New York.

* In 1860, Arthur was also part of the effort in winning a New York Supreme Court ruling that slaves transferred through New York state would automatically be freed.

For more President Chester Arthur facts, go to WhiteHouse.gov. For a complete list of American presidents with links to poems go to US Presidents List.