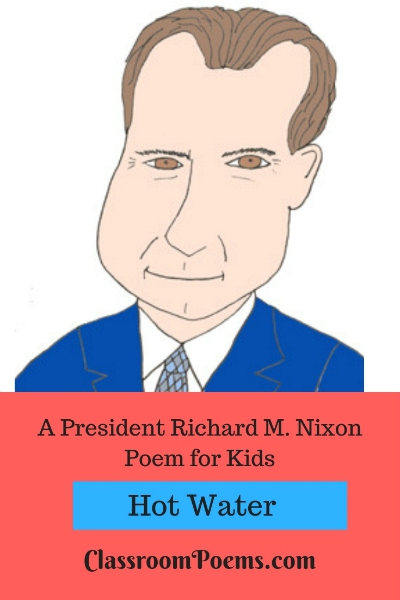 The world was his song
and the future his tune.
A visit to China,
a man on the moon.
With arms talks in Moscow,
the draft at an end,
who knew that his troubles
were just 'round the bend?
The Watergate break-in
and cover-up time.
He got in hot water
and had to resign.
For things he accomplished
some find themselves awed.
Too bad that this president,
sadly, was flawed.

Facts about the Richard Nixon Poem

During his presidency, Richard Nixon ended US involvement in the Vietnam war, and improved relations with China and the Soviet Union. It was during his first term that American astronauts made the very first moon landing. Unfortunately, Nixon became involved in the cover-up of the Watergate break-in scandal and ultimately was the first United States president to resign.

* The second of five sons, Richard Milhous Nixon was born on January 9, 1913, in Yorba Linda, California. His father, Francis Anthony Nixon, struggled to support his family by running a local grocery store and gas station.

* Nixon was president of the student body at Whittier College and was also excellent at debate. He graduated in 1934. He earned his law degree at Duke University in 1937. He was the head of the student Bar Association and graduated near the top of his class. After earning his law degree, Nixon returned to Whittier, California, to work as an attorney.

* While serving in the navy during WWII, Nixon won a windfall of cash playing poker. Instead of squandering his winning, he instead used it as seed money to fund his first political campaign in 1946.

* Nixon was elected to Congress in 1946 by defeating a five-term Democrat incumbent. He was re-elected in 1948.

* Two years later, at age 39, General Eisenhower selected him as his presidential running mate. They won!

* The Checkers Speech. While a vice presidential candidate, Nixon was the target of a negative campaign alleging he'd accepted money and gifts from industry lobbyists. On September 23, 1952, he gave what would become his famous 'Checkers' speech, proclaiming that the only gift he'd received was a Cocker Spaniel puppy his family had named Checkers --and that he had no intention of giving it back! This speech effectively saved his political career.

* The Truth about Checkers. While many American knew about Checkers because of Nixon's famous speech, this dog never actually lived in the White House. Checkers died in 1964 at age 13, four years before Nixon was elected president.

* An Active Vice Presidential Role.  Dwight Eisenhower, coming from a military background, was comfortable with giving his vice president authority and influence within his administration. Nixon was, in fact, the most engaged and active vice president up to that time.

The Road to the White House:
Facts to Support the President Richard Nixon Poem

The 1960 Kennedy vs. Nixon Election
* In 1960, Richard Nixon won the Republican presidential  nomination, but lost in one of the closest elections in history to Democrat Senator John F. Kennedy.

* In the first-ever televised event, more than 70 million Americans watched as Richard M. Nixon and John F. Kennedy engaged in a live political debate. Nixon, who was less photogenic -- and who was recovering from surgery -- looked sweaty and nervous compared to the tanned and cool JFK.

Gubernatorial Election
* After losing to JFK, Nixon returned home to California. For a time he practiced law. But the siren  call of politics returned. Nixon ran -- and lost -- a bid to become the governor of California in 1962. A bitter Richard Nixon expressed his frustration with what he felt was unfair press coverage during the campaign, telling reporters after his defeat, "You won't have Nixon to kick around any more."

* Nixon's ascendancy into office came at a time of bitter division in the US over the Vietnam war. Women were marching for equal rights, and there were race riots in many US cities.

* As president, Richard Nixon proposed revenue sharing. He signed new anti-crime legislation and took measures to end the military draft system at the end of the Vietnam conflict. He also created the Environmental Protection Agency, and appointed conservative justices to the US Supreme Court.

* In 1969, Americans, as well as people around the world, were awed as they watched the first manned walk on the moon.

* In the 1972 presidential election, Nixon defeated Democrat George McGovern by one of the widest margins in US history.

* In 1972, Nixon visited Beijing and Moscow, reducing political tensions between the US and both China and Russia. Nixon also had summit meetings with the Soviet official Leonid Brezhnev to limit strategic nuclear weapons.

* In 1973, Nixon announced an accord with North Vietnam, effectively ending the US involvement in armed conflicts in Indochina.

* Nixon's Vice President Spiro Agnew resigned office in 1973, due to his involvement with scandals in his home state of Maryland. Nixon nominated House Minority Leader Gerald Ford as vice president to replace Agnew.

* in 1974, Nixon's Secretary of State, Henry Kissinger, negotiated an agreement between Israel and both Egypt and Syria.

The Watergate Scandal and Resignation:
Facts to Support the President Richard Nixon Poem

* A few months into his second term in office, a scandal broke out regarding a break-in at the DNC (Democratic National Committee) office during the 1972 campaign. This break-in was traced to an official of the Committee to Re-elect President Nixon.

* Many Nixon administration officials and members of his re-election campaign resigned, and some were convicted of crimes related to the scandal and cover-up.

* Nixon denied any knowledge of the Watergate break-in. But the courts required him to turn over to investigators White House tape recordings that revealed he did, in fact, know about -- and attempt to conceal -- information about the break-in.

* Faced with certain impeachment, Richard Nixon resigned the presidency on August 8, 1974, and left the White House one day later.

* President Gerald Ford pardoned Richard Nixon shortly after taking over the reigns of the White House. In retirement, Nixon wrote books on foreign policy and about his experiences in public office. Over time, he regained the respect of much of the American public as an elder statesman.

If you enjoyed this President Richard Nixon poem, please go to US Presidents List for links to poems about other US Presidents. For more information about President Nixon, go to WhiteHouse.gov or History.com.