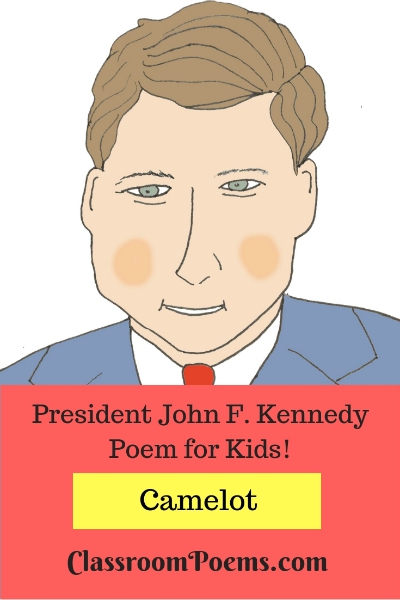 Jack Kennedy, the handsome prince,
with Jackie as his mate.
Their castle was the White House
and he served as head of state.
The country, in a post-war boom,
the missile crisis passed.
The people were united
in a way felt meant to last.
But one assassin's bullet
took his life out o the spot.
A single shot that took his life
and ended Camelot.

* John F Kennedy was the second of nine children bornMay 29, 1917, to Joseph and Rose Kennedy. His parents were both themselves born of two of the wealthiest Boston families. Kennedy, who was always referred to as "Jack," attended elite private schools and summered with his family in Hyannis Port on Cape Cod.

* Kennedy's father, Joseph, had been an early supporter of Franklin D. Roosevelt, and had been appointed chiarman of the securities and exchange commissiion in 1934, and was a United States Ambassador to Great Britain in 1937. While still a Harvard student, Jack accompanied his father to Great Britain, acting as his secretary.

* Kennedy's senior thesis, a study of Great Britain's unpreparedness for war, was published as a book, "While England Slept," in 1940.

Facts about the John F Kennedy Poem:
The War Years

* Kennedy joined the US Navy in 1941, and two years later commanded a Patrol Torpedo ship, PT-109, in the Solomon Islands. In 1943, PT-109 was attached, and Kennedy was able to led the survivors to safety, rather than surrendering to the Japanese. He was later awarded the Navy and Marine Corp medal for heroism.

* Kennedy's older brother, Joe, was killed in 1944 when his Navy aircraft exploded with its own charges while on a secret mission to destroy a German missile base. Kennedy's father, Joseph Sr., told Jack it was his duty to fulfill his brother's destiny and become the first Catholic president of the United States.

* Kennedy left the Navy in 1944, and worked for time as a journalist, which was the career he had originally desired.

* He ran for Congress in 1946, as a moderately conservative Democrat, with the support of his father's wealth. In January of 1947, he entered Congress at age 29, with an appealing youthful and relaxed demeanor. He was reelected in 1948 and 1950.

* On September 12, 1953, he married Jacqueline Bouvier, who was destined to become  a well-loved first lady as well as a fashionable icon in her own right.

* In 1956, Kennedy lost a close contest to earn the Democratic vice presidential nomination under Adlai Stevenson.

* Kennedy announced his candidacy for president on June 2, 1960. He defeated the more liberal Hubert Humphrey in the primary, and chose Speaker of the House Lyndon Baines Johnson as his running mate.

* President Kennedy and his family brought youth and glamour to the White House. They were an attractive and stylish couple, along with their two young children, Caroline and John Jr. His presidency came at a time of post-war boom of peace and prosperity.

* People came to think of the White House in terms of the fictional Camelot, where King Arthur presided over perfection, where the weather and life was decreed to be wonderful every day. To quote the lyrics of the refrain, "In short, there's simply not, a more congenial spot, for happily-ever-aftering , than here in Camelot."

* As it turned out, because of Kennedy's untimely death, Camelot was to be short lived. Years later, rumors of his infidelities and his personal association with organized crime figures would sully the Camelot image.

* Kennedy appointed his younger brother, Bobby, as his attorney general. His youngest brother, Ted, won JFK's Senate seat in 1962. The Kennedy dynasty was in full swing.

* In his inaugural address, Kennedy spoke about eliminating poverty and also about wining the Cold War with the Soviet Union, and defeating the spread of world-wide communism. His speech included his now-famous quote, "Ask not what your country can do for you -- ask what you can do for your country."

Facts about the John F Kennedy Poem:
The Presidency

* In April 1961, Kennedy sent 1400 CIA-trained Cuban expatriates to engage in an amphibious landing on the Bay of Pigs in Cuba. This was an attempt to create an internal rebellion to overthrow Cuban Communist  dictator, Fidel Castro. Unfortunately, this ended in disaster, as nearly all those involved in the invasion were captured or killed.

* In June 1961, Kennedy met with Soviet Premier Nikita Krushchev in Vienna to discuss the situation of the divided city of Berlin, Germany. Just two months later, East German soldiers started erecting the now-famous Berlin Wall, to keep those in their part of the city from escaping to West Berlin, where people were free and not under the yoke of communist totalitarianism.

* In 1963, Kennedy escalated US involvement in Vietnam in an effort to curb worldwide communism. This was a first step in what would later become the war in Vietnam.

* Kennedy oversaw the launch of the Peace Corp, an organization created with the mission of sending young Americans to serve the people of underdeveloped countries around the world.

* Two priorities Kennedy never had the opportunity to address included income tax cuts and civil rights legislation. He did endorse the Civil Rights March in Washington, in August 1963.

Facts about the John F Kennedy Poem:
The Assassination

* On November 22, 1963, the Kennedys were traveling in a presidential motorcade from an airfield to the Dallas Trade Mart, where Kennedy was scheduled to speak. Just after 12:30 pm, shots were fired and Kenned was struck in the head and neck. He was pronounced dead shortly after reaching a nearby hospital.

* Because of Oswald's murder, before a complete investigation could unfold, there was massive national speculation about the true nature of Kennedy's death. Was it a communist plot? An action by the KGB (Russian secret agents)? An internal US attack by rivals?

* To quell the conspiracy theories, in 1963 President Lyndon Baines Johnson established a presidential commission headed by Chief Supreme Court Justice Earl Warren. They were tasked with investigating President Kennedy's assassination. While the commission determined there had been no conspiracy, many in the public felt there had been a coverup of some kind and that the truth would never be revealed.