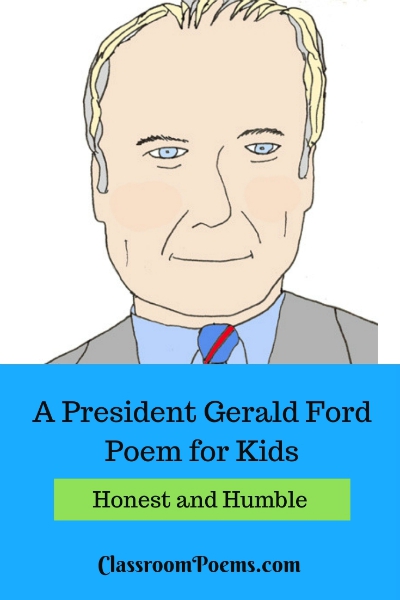 Known for a slip of his foot
(or his tongue),
or winning at football
back when he was young.
He might have been known for
a fall or a stumble,
yet President Ford was both
honest and humble.
His pardon of Nixon put Watergate past.
The country could breathe,
and move forward at last.
When Carter took office
(another fine man),
he thanked Gerald Ford for help
"healing our land."

President Richard Nixon chose Gerald Ford to be his second vice president. His first vice president, Spiro Agnew, resigned due to a scandal unrelated to the infamous Watergate break-in. Ford gave Nixon an official pardon for any crimes committed. Despite being a former college football star at the University of Michigan, Ford was known as an awkward and clumsy president. He was even parodied on Saturday Night Live on NBC. Ford didn't win his bid for a second term. But he is generally well regarded for guiding the nation through a difficult time.

* Gerald Ford was born Leslie Lynch King, Jr., in Omaha, Nebraska. Shortly after he was born, his mother divorced his abusive alcoholic father and moved to Michigan, where she met Gerald Rudolph Ford, owner of a paint store in Grand Rapids. They were married in 1916.

* Ford was not told about his biological father till he was a teenager. After graduating college, he officially changed his name to Gerald Rudolph Ford, Jr., as he'd always loved and respected his stepdad.

* In 1931, Ford graduated in the top 5% of his South high School class in Grand Rapids. His favorite subjects were history and government. He was named the most popular senior by his classmates. he worked at a  local restaurant and also played high school football.

*  His talent at football let to his admission to the University of Michigan, where he was on the football team. He majored in economics and worked his way through college. Upon graduating, he was offered contracts from the Detroit Lions and the Green Bay Packers. He turned down both offers. His plan was to attend law school.

* With his eye on getting into  Yale Law School, Ford took a job as an assistant football coach at Yale, and also coached boxing. Eventually, after much persistence, he won admission the the prestigious Yale Law School in 1938, and graduated in the top third of his class in 1941.

* After graduating law school, Ford returned to Grand Rapids to open a law practice. As a young lawyer, he grew interested in politics and became active in the local Republican party.

* Pearl Harbor. After the Japanese attacked Pearl Harbor, Ford enlisted in the US Navy and was called duty in April 1942. He served four years in the Pacific, battling the Japanese. His war experience caused him to become an internationalist, believing the US had a role to play on the world stage.

* After the war, Ford joined another Grand Rapids law firm, and started dating Elizabeth (Betty) Bloomer. They were married October 15, 1948, while Ford was campaigning for a seat in the US House of Representatives.

* Not only did Ford win the 1948 election, he was re-elected to serve and additional and consecutive twelve terms. He served on the House Appropriations Committee, overseeing all government spending. He enjoyed a goo reputation as a hard worker with strong ethics who worked well with members of both parties.

* Ford supported the election of Dwight Eisenhower as president and also approved of Eisenhower's choice of Richard Nixon as vice president.

* In 1965, Ford became the House Minority Leader in Congress.

* In 1973, the Nixon administration was in crisis because of the Watergate scandal, regarding a June 1972 burglary at the Democratic National Committee's headquarters in the Washington Watergate Hotel. Nixon knew that members of his re-election campaign had been involved and worked to cover up their actions. This decision backfired.

* There was a second Nixon administration scandal that caused Nixon's vice president, Spiro Agnew to resign. This was the result of a plea deal, as he was accused of accepting bribes both while as vice president and also earlier, as governor of Maryland.

* President Nixon asked Ford to be his vice president, mostly because Nixon's advisers felt Ford was the most likely to be approved by Congress. Well-liked and respected by both parties, the Senate confirmed Nixon's choice 92 - 3, and the House, 387 - 35. Ford too the Vice Presidential oath December 6, 1973, and served in that capacity for only eight months.

* When the Supreme Court ruled that the Nixon administration had to turn over recordings of White House conversations, it was revealed that President Nixon had, in fact, orchestrated the Watergate cover-up and had abused his presidential power. Congress moved to impeach President Nixon.

* While he had been a Nixon supporter, Ford spoke against the president on August 5, 1974, saying that the tapes did, in fact, reveal that Nixon had committed an impeachable offense.

* On August 8, 1974, President Nixon announced his resignation in a televised address to the nation. The next day, Gerald Ford was sworn in as the 38th President of the United States. He was the first and only president not voted into office by the American people.

The Presidential Years:
Facts to Support the Gerald Ford Poem

* In President Ford's inaugural speech, he said, "Our long national nightmare is over. Our Constitution works. Our great republic is a government of laws, and not men."

* Ford pardoned Nixon shortly after assuming office. This meant that Nixon would not be prosecuted for his crimes. There was controversy over this decision. Ford was accused of cutting a deal with Nixon to be president in exchange for a pardon. Ford strongly denied this accusation, saying it was time for the nation to heal.

* In his two years in office, Gerald Ford's administration had to deal with the domestic energy crisis and a weak economy, including both high inflation and unemployment.

* Ford vetoed 66 pieces of legislation put forth by the  Democrat-controlled Congress, as he felt they did not meet his standard of fiscal conservatism.

* As president, Ford was unable to convince Congress to release funds to aid South Vietnam. Because of this, the country fell to North Vietnam.

* Ford signed the Helsinki Accord, easing tension with the Soviet Union, and with the goal of improving relations between the Western nations and the communist nations of Eastern Europe.

* President Ford lost his re-election bid against Democrat Jimmy Carter in 1976. While it was a close race, some felt that his pardon of Nixon had hurt him politically.

The Retirement Years:
Facts to Support the Gerald Ford Poem

* Ford did not lead a quiet retirement. He gave speeches and served on boards of major corporations. He also played golf and enjoyed the sport of downhill skiing.

* Ford and his wife opened the Betty Ford Clinic in California, promoting research, treatment and rehabilitation of alcoholism, something his wife has battled for years.

* in 1999, Ford was awarded the Presidential Medal of Freedom, America's highest civilian honor.

If you enjoyed this President Gerald Ford poem, please go to US President List for links to poems about other US presidents. For more information about President Ford, go to the MillerCenter.org or History.com.