Welcome to this John Quincy Adams poem, The President and the Alligator, by Denise Rodgers. 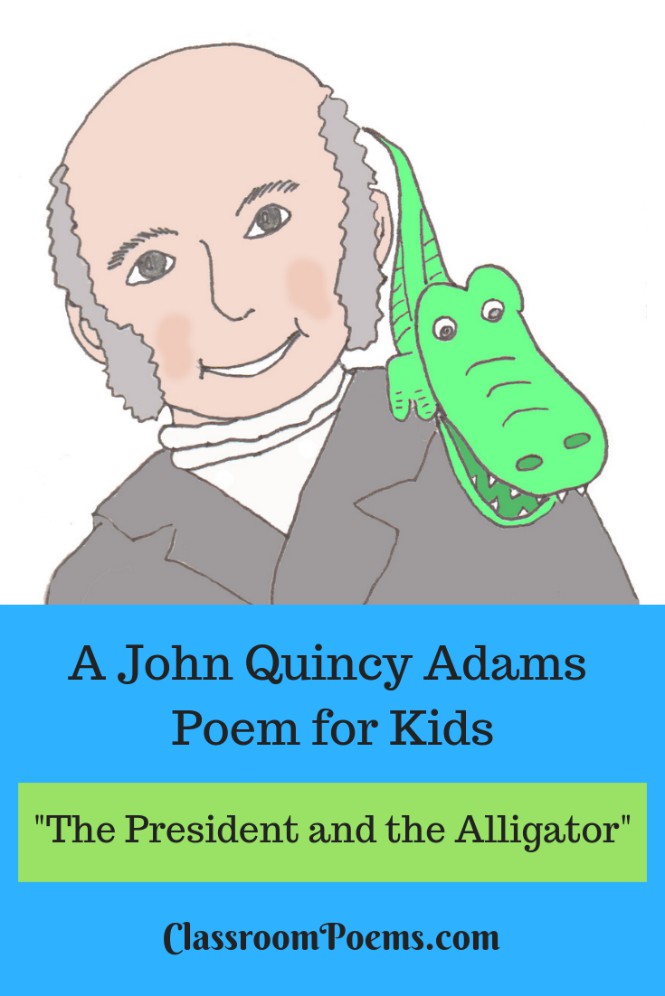 The President and the Alligator
A John Quincy Adams Poem

The first to share his father's name
And follow-up with White House fame.
He was the only president
With 'gator kept in residence.
The first to take a daily swim.
(We're sure his pet was not with him.)

When his White House years were done,
Decided once again to run.
And though he’d made it to the top
He found he simply could not stop.
He ran for Congress, and with pride,
He served his country till he died.

6th President of the United States

There are many more John Quincy Adams facts than are found in the poem on this page. The fact is, John Quincy Adams had many "firsts." He was the first son of a president (John Adams, the second president of the United States) to also become president himself. He was the first president to keep an alligator as a White House pet, albeit for a limited time. He was also the first president to continue his political career after his term of office was over. He ran for Congress in the state of Massachusetts and served nine consecutive terms until he died.  Read on for more...

Secretary of State
John Quincy Adams served as Secretary of State under President  James Monroe. He certainly had sufficient experience, having previously served as Minister to the Netherlands, Prussia, Russia, and Great Britain.

First President to also Serve in Congress After Presidency
From 1831 till 1848, John Quincy Adams was elected and served nine consecutive terms in Congress as a representative of his home state of Massachusetts. He had a stroke and collapsed while on the floor of the House, and died two days later in the Speaker's office.

Billiard table
Adams added a billiard to to the White House at his own expense. He was criticized for corrupting the youth of America. (It's not easy being president. No matter which party you're in, there will be others who watch your every move.)

Pet Alligator
His old friend, Marquise de Lafayette, came from France to visit, with the gift of an alligator. Adams was the first president to enjoy the company of this scaly pet, which he kept in the East Room of the White House (where his mother and servants did the laundry when he was a child.) It wasn't until Herbert Hoover became president that there was a pet 'gator in the White House again!

Skinny Dipping
John Quincy Adams would sneak out of the White House in the wee hours of the morning to go skinny dipping. (We have to assume that he did not take his pet alligator with him!)