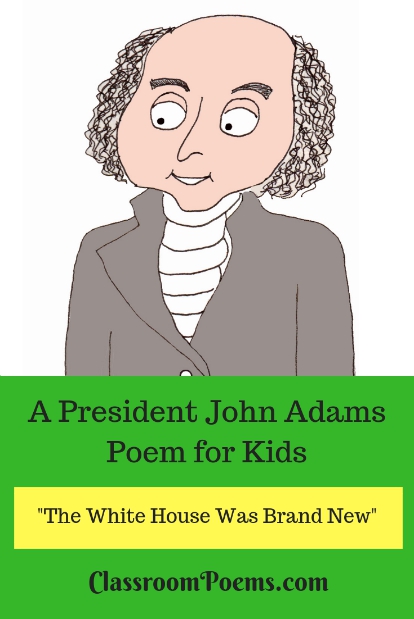 The White House was Brand New
A John Adams Poem

They moved in when the White House
was not done and hardly finished.
With most rooms bare and windowless,
their awe was not diminished.

The land around the White House
was still wild and kind of boggy.
The air was moist and damp and cold,
the mists a little foggy.

Small houses scattered on the land,
between the stumps and trees,
with not much city built to feel
the firm Potomac breeze.

The White House lawn was barren,
and because this, I suppose,
was why they used the East Room
to dry all first family clothes.

Despite this frontier feeling
for John Adams and his wife,
they met their stately functions
and kept up with public life.

He was our second president;
the White House was brand new.
But only two months later,
when his office term was through

He crept out of the capital
before the morning light,
left power to his rival
with no guns, no swords, or fight.

It's true he loved his country;
Independence was his pride.
July 4th, 1826,
a patriot, he died.

Facts about the John Adams Poem

The John Adams facts, included in this poem, reveal that John and Abigail Adams were the first presidential couple to reside in the White House. They moved from the original presidential headquarters in Philadelphia in November of 1800. There were just three months left to his term in office, and work on the structure was still in progress. Because it was so damp outside—and "outside" was, for the most part, wilderness—Abigail and the servants hung laundry up to dry in the as-yet-unfurnished East Room.

The presidential race between John Adams and Thomas Jefferson was hard fought and there were some bitter feeling between the two former friends. When he lost this race to Jefferson, he wasn't exactly gracious about turning over power. Instead, he and his wife, Abigail, snuck out of Washington, D.C., during the dark of night to avoid the inaugural ceremonies the next morning.

However, to his credit John Adams did hand power over without a fight. This was the beginning of the lively, yet peaceful, political process that continues to this day.

Prolific Letter Writer
John Adams wrote more than 1100 letters to his wife, Abigail, as they were often separated as he served his country, both before and after nationhood.

Died Same Day as Thomas Jefferson
This happened to be the 50th Anniversary of the signing of the Declaration of Independence—July 4, 1826. There was nothing sinister going on. Both men died peacefully in their homes, miles apart, on this very meaningful day.

If you enjoyed these John Adams facts and the John Adams poem, and would like to read more poems and facts about the presidents, go to our complete US President List. For more information about John Adams, go to WhiteHouse.gov.