We hope you will also enjoy this Thomas Jefferson poem, The Renaissance Man, by Denise Rodgers 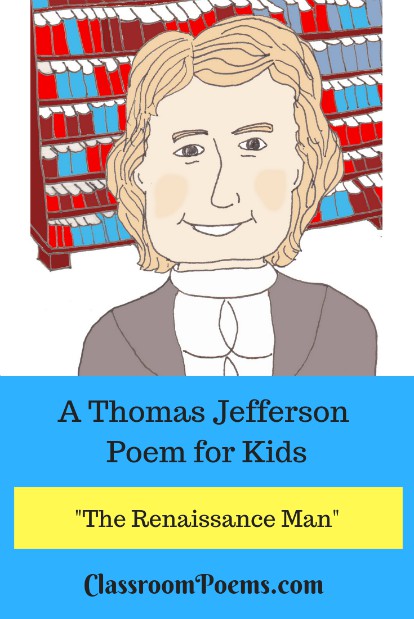 History and botany,
languages, theology,
chemistry and politics,
anatomy, zoology,
the orators and law.
He read so much and often
that it almost was a flaw.

His interests were so wide and strong,
played violin three hours long
and still had time to pluck his garden weeds.
Collected some six thousand books,
would read them, and take second looks.
Thom Jefferson had many varied needs.

The big Land Purchase* was his prize.
It doubled our new nation's size.
Paid several million dollars for it.
Lewis-Clark** went to explore it

A learned man, of true creation,
wrote the words of Declaration.
Lived a full life his own way,
and died on Independence Day.

Facts about the Thomas Jefferson Poem

More philosopher and scholar than a politician, Thomas Jefferson had a lively interest in science, architecture, history, and more, and this is reflected in the Thomas Jefferson poem, above. He wrote the first draft of the Declaration of Independence in 1776.  He is responsible for the *Louisiana Purchase, buying land west of the Mississippi River to the Rockies, and from Canada to the Gulf of Mexico, all from France, thereby doubling the size of the country. He then supported the **Lewis and Clark expedition which set out to explore this land and find a passage to the Pacific Ocean. A strange, but true fact: both John Adams and Thomas Jefferson, signers of the Declaration and presidents of the U.S., died peacefully in their own homes, miles apart, on July 4, 1826.

Big-time Father
• Wife Martha had six children.
• Believed to have had an additional six children with his slave, Sally (Sarah) Hemings.
• Father of the University of Virginia. (This means he was a founder, one of the people who originally formed this university.)

Avid Reader
Had a collection of 6500 books, which was sold to the Library of Congress after his death.

Religion
While a champion of religious freedom, Jefferson belonged to no church, but contributed to many.

Casual Dresser
Thomas Jefferson was a casual dresser, both at Monticello (his home) and at the White House. He was known to greet foreign officials in worn slippers and work clothing.

Red Fox
His nickname was Red Fox, because of his red hair.

No More Tribute to Pirates!
His first crisis as president was dealing with the Barbary Pirates of North Africa. They would kidnap American sailors and imprison and torture them. The US had been paying tribute (protection money) to prevent this.  Jefferson sent the US Navy, and the leader of Tripoli signed a peace treaty ending the need for tribute.

Died July 4, 1826
Jefferson died on the 50th Anniversary of the Declaration of Independence -- and -- on the same day as his former friend, President John Adams. Both died peacefully in their homes, miles apart.