Here is a President James Monroe poem, Europe: Butt Out!, by Denise Rodgers. 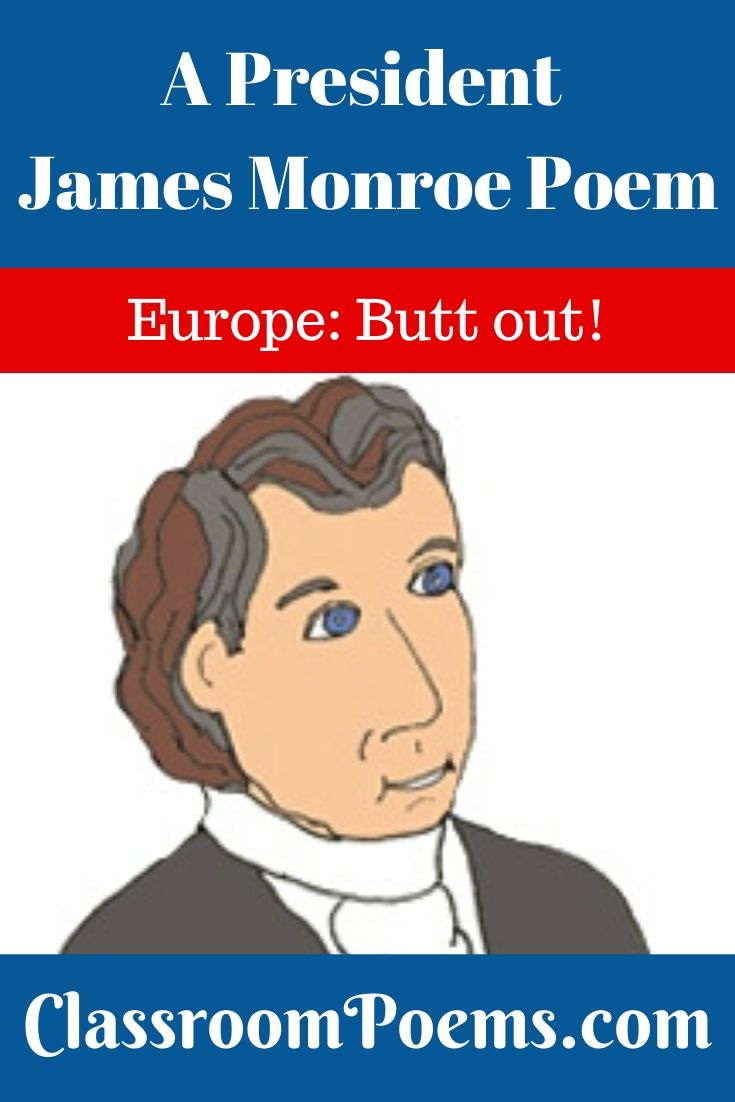 Here is the Doctrine
and what it's about,
a simple attempt to say,
"Europe: Butt out!"

This side of the globe is not yours;
Mind your space!
Unless you are trading
Stay out of our face!

So send on not troops,
Send no gunships or arms.
If you heed our warning
You'll stay out of harm.

The world's grown much smaller;
We're tied by one thread.
But that is the Doctrine,
What James Monroe said.

Facts about the James Monroe Poem

James Monroe is best known for his "Monroe Doctrine," which was a declaraton telling Europe to stay out of politics in the New World. It was really a message to Spain to not even think of trying to win back her Latin American colonies. This declaration did not become known as the "Monroe Doctine" until about twenty years after Monroe's death in 1831. (Take a look at this article and note that three of the five Founding Fathers died on July 4!)

• James Monroe was the last of the Founding Fathers to become president of the United States. As mentioned above, he was one of the three who died on July 4. (John Adams and Thomas Jefferson also died on this important date.)

• James Monroe presided over what was called the "Era of Good Feelings." The country was relatively at peace, and there was no rancorous political strife during his term.

• Monroe and his wife, Elizabeth, took a tour of the country prior to moving into the White House, which was still undergoing repairs from damage done during the War of 1812. The tour started in Washington, DC, and went to Portland, Maine, Detroit, and back again. This tour took a full fifteen weeks! (There was no air travel, or even a good railroad system as yet.)

• James Monroe was anti-slavery, but slavery was in full force during his term in office.

• James Monroe was the first president to show his own hair in public. Previous presidents all wore wigs.

For more information about James Monroe, go to WhiteHouse.gov. If you enjoyed this President James Monroe poem, go to our US Presidents List for links to other president poems.