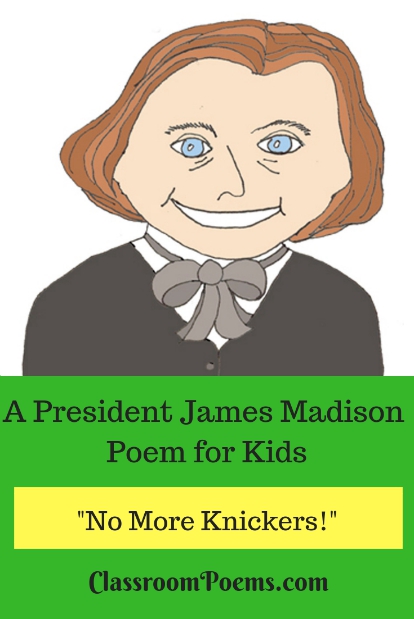 James Madison took quite a stance
by forging forth and wearing pants.
Before that, in all halls and courts
the style was knickers (much like shorts).
He knew what long-legged pants were for
and wore his nearly to the floor,
Perhaps he tried them and was hooked.
(Or simply like the way they looked.)
Most men agreed, as seen this way:
It's still the style up to this day.

Note:
While true that he gave up his "tights,"
he's known for for the "Bill of Rights!"

James Madison was known for much more than the length of his pants! He had an equally famous wife, Dolley Madison, who was the toast of Washington, D.C., before and during marriage to him, and even after his death. But James Madison, one of the the Founding Fathers of the United States, served in the Continental Congress and took part in the debates during the Constitutional Convention. He also co-wrote the Federalist essays along with Alexander Hamilton and John Jay. Madison also helped write the Bill of Rights.

When the British imprisoned American seamen and seized their cargo during his administration, Madison declared War on June 1, 1812. During this war, which became known as the War of 1812, the British marched on Washington and set fire to the White House and the Capitol. Despite opposition to the War, especially in New England, once the Americans were successful under General Andrew Jackson in New Orleans, the general sentiment in the country became patriotic and nationalistic.

In his later years, James Madison was called the "Father of the Constitution." A modest man, Madison insisted that this important document was not "the offspring of a single brain," but "the work of many hands." While that may be true, James Madison is, in fact, indisputably one of the founding fathers of the United States.

Party:
Democratic Republicans
(party co-founded with Thomas Jefferson between  1791 and 1793)