Please enjoy this Bill Clinton poem, Peace and Prosperity, as well as facts about the 42nd president of the United States. 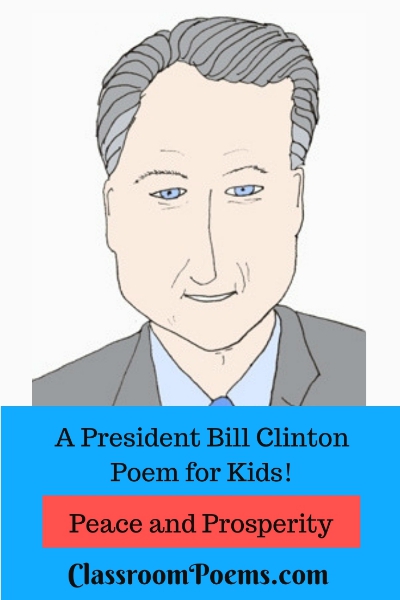 Peace and prosperity
Dot-coms were king.
The stock market high
and the world on a string.

A popular man
who was sometimes a riddle.
He'd play both and left and the right
from the middle.

With surplus of budget,
environment laws
and welfare reforms,
he improved many flaws.

Despite his impeachment
his acts to defend,
he still was well liked
when his term came to end.

The Early Years:
Facts to Support the Bill Clinton Poem

* When he was four years old, Bill's mother married Roger Clinton, a car dealer and, unfortunately, an abusive alcoholic, and the young family moved to Hot Springs, Arkansas, about an hour and a half away. It was a difficult marriage; his mother divorced and remarried his step-dad when Bill was in his teens.

* Clinton excelled in school and in sports, and showed an early interest in politics. He also played saxophone in his high school band and loved listening to gospel music at his Baptist church.

* While attending Hot Springs High School, 17-year-old Bill Clinton was sent to Washington, D.C., as one of two boys participating in a mock political convention sponsored by the local American Legion. It was there that he shook President John F. Kennedy's hand in the White House Rose Garden. That iconic photograph later came  to symbolize the continuity of of the Democrat party from the 1960s to the 1990s.

* Clinton was awarded a scholarship to attend Georgetown University in Washington, D.C., and majored in international affairs. He worked part-time jobs to cover his expenses.

* In his junior year of college, Clinton clerked for Senator J. William Fulbright of Arkansas, for the US Senate Foreign Relations Committee. Fulbright was an active critic of the Vietnam war, and it was there that Clinton solidified his view that the United States had no legitimate reason to wage battle in that country.

*  Clinton was awarded a two-year Rhodes scholarship to study at Oxford University in England. Despite his eligibility for the draft, due to then-changing federal  policy on college deferments, Clinton contacted his local Arkansas draft board and was given permission to travel to Oxford.

* While in Oxford, Clinton did receive draft notice, but managed to put it off with the help of his connections to Senator Fulbright and Arkansas Republican Governor Winthrop Rockefeller.

* Clinton earned a degree at Yale Law School in 1973. It was there that he met Hillary Rodham. They were married in 1975.

* After graduating law school, the Clintons moved to Arkansas where he taught law at the University of Arkansas in Fayetteville. But teaching was not Clinton's goal. He quickly became involved in local politics, running for a seat in the US House of Representatives in 1974. While he lost this bid, it was a close race against a  26-year Republican incumbent, making him a rising star in Arkansas politics.

* Just two years later, Clinton was elected Arkansas state attorney general. In 1978, ran and won the Arkansas governor's seat, when he was just thirty-two years old. While he was a popular choice, his youthful inexperience in handling riots and raising state fees, as well as adding unpopular state regulations led to his loss at the following gubernatorial election. At this point in his life, Bill Clinton had the unhappy distinction of becoming the youngest former governor in American history.

* A temporarily defeated Bill Clinton went to work for a Little Rock law firm, but his energy was focused more on the coming gubernatorial election than on his law practice. He ran again -- and won -- the 1982 election by admitting his mistakes and turning on what was to become the famous Bill Clinton political charm. After this election he owned the Arkansas governor's seat, winning again in 1984 and then two, four-year terms in 1986 and 1990.

The Road to the White House:
Facts to Support the Bill Clinton Poem

* While serving his five terms as Arkansas governor, Clinton had his sights set on the White House. He served as chairman of the National Governors Association both in 1986 and 1987. He developed a centrist platform that linked government assistance and action with the American values of hard work and individualism. He called his progressive view of government a "New Covenant"  and called himself a "New Democrat."

* Despite charges of having evaded the draft during the Vietnam war, and also his rumored extramarital affairs while in office, Clinton had an easy time becoming the front runner in the 1992 Democratic presidential primaries. He did national interviews to address his perceived shortcomings, admitting that he'd "caused pain" in his marriage and also that he'd smoked marijuana, although he'd not inhaled. This placated many voters, but of course not so much those who voted Republican.

* Running against Republican incumbent George H. W. Bush turned out to be easier than one might expect. While Bush had enjoyed popularity because of his swift action in the Gulf War, he had two other strikes against him: Bush had broken his campaign promise to add no new taxes, and he'd not taken action on an economic recession that developed during his administration. Because of this, Clinton campaign headquarters featured a sign that read, "It's the economy, stupid."

* Another spoiler in George H.W. Bush's re-election campaign was the emergence of Ross Perot, a billionaire businessman, as a third party candidate. While it could be argued that Perot stole votes from both Clinton and Bush, his candidacy clearly hurt the incumbent Bush more than Clinton.

* On November 3, 1992, Clinton won twice the number of Electoral College votes than Bush. However, because of Perot's candidacy, Clinton did not win a clear majority of the popular vote, when counted against the combined totals of Bush and Perot.

The Presidency:
Facts to Support the Bill Clinton Poem

* During his first year in office, Clinton won a battle with Congress for an economic recovery package. It increased taxes on the wealthy and cut spending on government programs. Because of the program, and the booming economy, there was a $124 billion national surplus by 1999. Clinton's accomplishment was creating the first US balanced budget in decades. In addition to Clinton's undeniable political charm, this was a key to his wide popularity during both his terms in office.

* The 1990s were the era of the dot-com craze. Investors were putting millions into Internet start-up companies in the hopes of funding — and reaping the rewards — of being part of the next Amazon.com or eBay. This was at least part of the surging economy enjoyed by Americans during the Clinton presidency.

* Early in his first term, Bill Clinton appointed his wife, Hillary Clinton, as head of a task force to craft a health care reform bill that could get through Congress. Unfortunately, because of the importance of this bill to every American, and the way in which the task force worked in secret (and the fact that she was the First Lady, making it awkward for critics to question her actions) — the effort to enact health care reform was a political disaster.

* After the failure of health care reform, Clinton instead concentrated on ending the "era of big government." He emphasized the need for legislation to improve the education of America's children, to protect the jobs of parents who needed to care for sick children, to restrict the sale of handguns, and to strengthen environmental regulations to assure a safe and healthy living environment for all Americans, even and  especially those who lived in minority or low-income areas.

* Part of Clinton's political success was achieved by co-opting the Republican agenda. For instance, he signed the  Personal Responsibility and Work Opportunity Reconciliation Act of 1996, thus, as he put it, "ending welfare as we know it."  The law replaced Aid to Families with Dependent Children with Temporary Aid to Needy Families. The goal was to institute a two-year life-time limit on government assistance.

* In 1993,  Clinton signed a law that became known as 'Don't Ask, Don't Tell,' in which homosexuals were to be allowed to serve the military so long as they did not reveal their private sexual life. This act was criticized both by conservatives who preferred that homosexuals not be allowed in the military, and by liberals who felt that this unnecessarily put gay people into the position of having to hide facts about their personal lives.

* In 1998, Bill Clinton was the second US president to be impeached by the House of Congress. (The first was Andrew Johnson in February 1868.) The impeachment was the result of the accusation of obstruction of justice in Clinton's efforts to not only lie about an extramarital affair with a young White House intern, but also to encourage White House staff to lie on his behalf. He was tried in the Senate, but was found not guilty. Despite his impeachment, he enjoyed great popularity with the American people.

If you enjoyed this Bill Clinton poem, please go to our US Presidents List for links to poems about all the US presidents. For more information about Bill Clinton, please go to WhiteHouse.gov and MillerCenter.org.