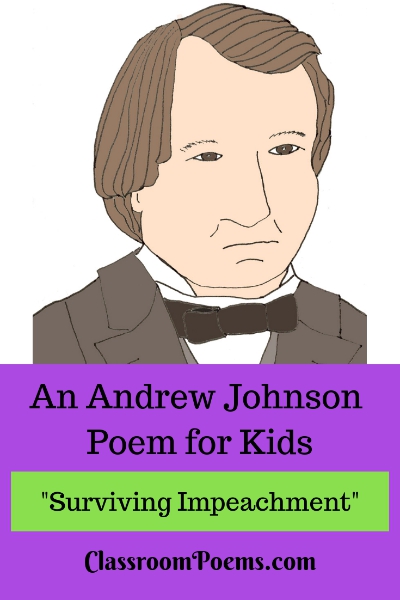 Congress hadn't noticed that
the Civil War was done.
The last shots fired, the treaty signed,
the North prevailed; had won.

Yet Johnson was a Southerner,
a man from Tennessee.
And, formerly, Vice President,
now President-to-be.

His goal, to make the country whole,
in ways both kind and fair.
But kindness to the Southern states
became a vengeful dare.

Republicans from Northerner states
took up the freed slaves' plight
punishing the Southern states
by giving blacks their rights.

With bitterness, they pushed through laws
and then, they added blame
by voting to impeach him,
thereby ruining Johnson's name.

He survived impeachment
by a single vote of one.
But his White House days were numbered,
his administration done.

Andrew Johnson was a Southerner who was loyal to the Union. He shared President Lincoln's view that the country should forgive the South after the war was won. He felt that sol long as Southerners abolished slavery and renounced secession, they should be self-governing once again.  Unfortunately, the Radical Republicans wanted to punish the South. They would hardly be "radical" by today's standards, as their goal was to give rights to the freed slaves. After tense battles between Johnson and Congress, there was a vote to impeach him. He survived impeachment by a single vote, but was ruined politically. He didn't run for president again in the next election.

* Andrew Johnson was Abraham Lincoln's second Vice President, chosen to help him (Lincoln) win re-election during the Civil War. Because Johnson was a Southerner who was against Southern secession from the Union, he seemed to be the perfect fit.

* Andrew Johnson was Vice President for only forty-one days when Lincoln was assassinated.

* As a young man, Andrew John was a tailor's apprentice. He later opened his own shop. He was the only president who knew how to quilt--and how to make his own suits!

* Because he grew up in poverty, Andrew Johnson felt he was the champion of the common man. He often vilified Southern plantation aristocracy.

* Andrew Johnson was unable to read until his wife, Eliza, taught him.

* He installed a barber's chair in the White House, and a telegraph office next to what was then his working White House office. (The oval office did not yet exist.)

* A notable accomplishment of President Johnson's administration was the Alaska Purchase of 1867. This was a purchase of approximately 586,412 miles of land from Russia. While it was generally a well-received event, critics called it "Seward's Folly," named after Johnson's Secretary of State, William H. Seward.

For more information about President Andrew Johnson, go to WhiteHouse.gov. If you enjoyed this Andrew Johnson poem, please go to US Presidents List for links to other US presidents.