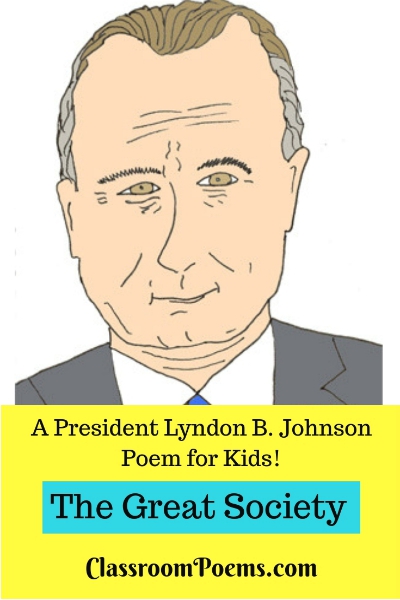 The Great Society was Johnson's case
for changing the world to a much better place.
He first looked at poverty, then declared war --
to try and cure misery, right at its core.
He felt that health benefits out to be paid,
so worked on two plans: Medicare, Medicaid.
He started up Head Start to push education
and spent on the future with space exploration.
He started the Job Corps for under-served teens
to give them a start and a job and some means.
His plans were ambitious, some last to this day,
the push to reach Greatness from one LBJ.

The Early Years
Facts to Support the Lyndon Johnson Poem

* Lyndon Baines Johnson was born August 27, 1908, the first of five children. While his father had been a state legislator, the family was not financially well off. He worked odd jobs after graduating high school, and later worked his way through Texas State Teachers College. He did, in fact, teach after graduation. His experience as a teacher in underprivileged districts affected his later political views.

* Johnson won a seat in the US House of Representatives in 1937, when a congressman in his district died while in office.

* After serving six terms in the House of Representatives, he was elected to the US Senate in 1948.

* He suffered a heart attach at age 49 in 1955. To protect his health, he subsequently quit smoking, but kept up the tireless work of his political life.

* By all accounts, Johnson was an asset to the campaign. Johnson's wife, Lady Bird, traveled some 30,000 miles  during the campaign, helping the Kennedy-Johnson team win Texas, Louisiana, and both North and South Carolina.

* Once in office as vice president, Johnson was sidelined by Kennedy and his administration. For example, while consulted on the Bay of Pigs invasion, he was kept out of the room when the final decision was made.

The Presidential Years
Facts to Support the Lyndon Johnson Poem

* Johnson was sworn in as president on November 22, 1963, the day Kennedy was assassinated.

* It was a huge challenge to assume the office of the presidency --- AND to campaign for office in the same year. While previous presidents had assumed office first as Vice President, Kennedy's death came much closer than any of the previous to the end of his term.

* At first, Johnson continued President Kennedy's legislation, working on a civil rights bill, and Kennedy's desired tax cut. But he was soon to start working on his own agenda.

* Johnson signed into law the Civil Rights Act of 1964. This prohibited discrimination based on race, color, religion, sex, or national origin. It banned segregation and mandated integration in schools and other public places. This was the first such legislation to pass Congress since Reconstruction in 1875.

* In some ways Johnson was an unlikely champion of civil rights. As Congressman, he'd voted against every Civil Rights bill that came across his desk from 1937 to 1956. He was a Southern man of this era, and often used racist language. Fortunately, despite this, his heart was in the right place.

* In 1964, President Johnson won re-election by 61% or 15 million votes.  This was the widest margin of popular votes in American history,

* Johnson's Great Society initiative included aid to education, a federal effort to rid the country of disease, urban renewal, beautification, conservation, a war on poverty, the development of depressed regions, to reduce and prevent crime and delinquency, and remove obstacles to the ease of voting, as well as an investment in space exploration.

* The 1968 Moon Landing might have been the pinnacle of President Johnson's second term in office. He congratulated the three American astronauts, "You've taken all of us, all over the world, into a new era."

* Johnson's agenda was well intended, but perhaps it was overly optimistic. When the results weren't speedy, there was unrest in the country, particularly in depressed African American neighborhoods, where dissatisfied young Americans demonstrated and rioted in many cities.

The Vietnam War
Facts to Support the Lyndon Johnson Poem

* Depressed inner-city residents were not Johnson's only concern. The war in Vietnam, started by President Eisenhower and escalated by President Kennedy, was also an issue. Despite his campaign promises, Johnson increased the number of US troops and expanded their mission.

* By 1967, Johnson's popularity tanked. The cost of the Vietnam war threatened the implementation  of his Great Society goals, and also created inflation. In addition to inner city riots, university students held anti-war demonstrations, chanting, "Hey, hey, LBJ. How many kids did you kill today?" Not a happy situation for any president.

* Johnson announced his withdrawal as candidate for president for the upcoming election in March 1968. His popularity was waning and his candidacy was being challenged by two Democrats: Eugene McCarthy and Robert Kennedy, brother of President Kennedy. Johnson announced that he would prefer to devote all his time and efforts to creating world peace. He retired at the end of his term in 1969 and moved to his ranch in Texas.

* A week before the Vietnam peace agreement was signed in Paris in January of 1973, Johnson died of a heart attack at his ranch in Texas. He is buried in the Johnson Family Cemetery, not far from his birthplace and his presidential ranch.

For more information about Lyndon Baines Johnson, go to Brittanica.com or History.com. If you enjoyed this Lyndon Johnson poem,  go to our US Presidents List page for links to more presidential poems.