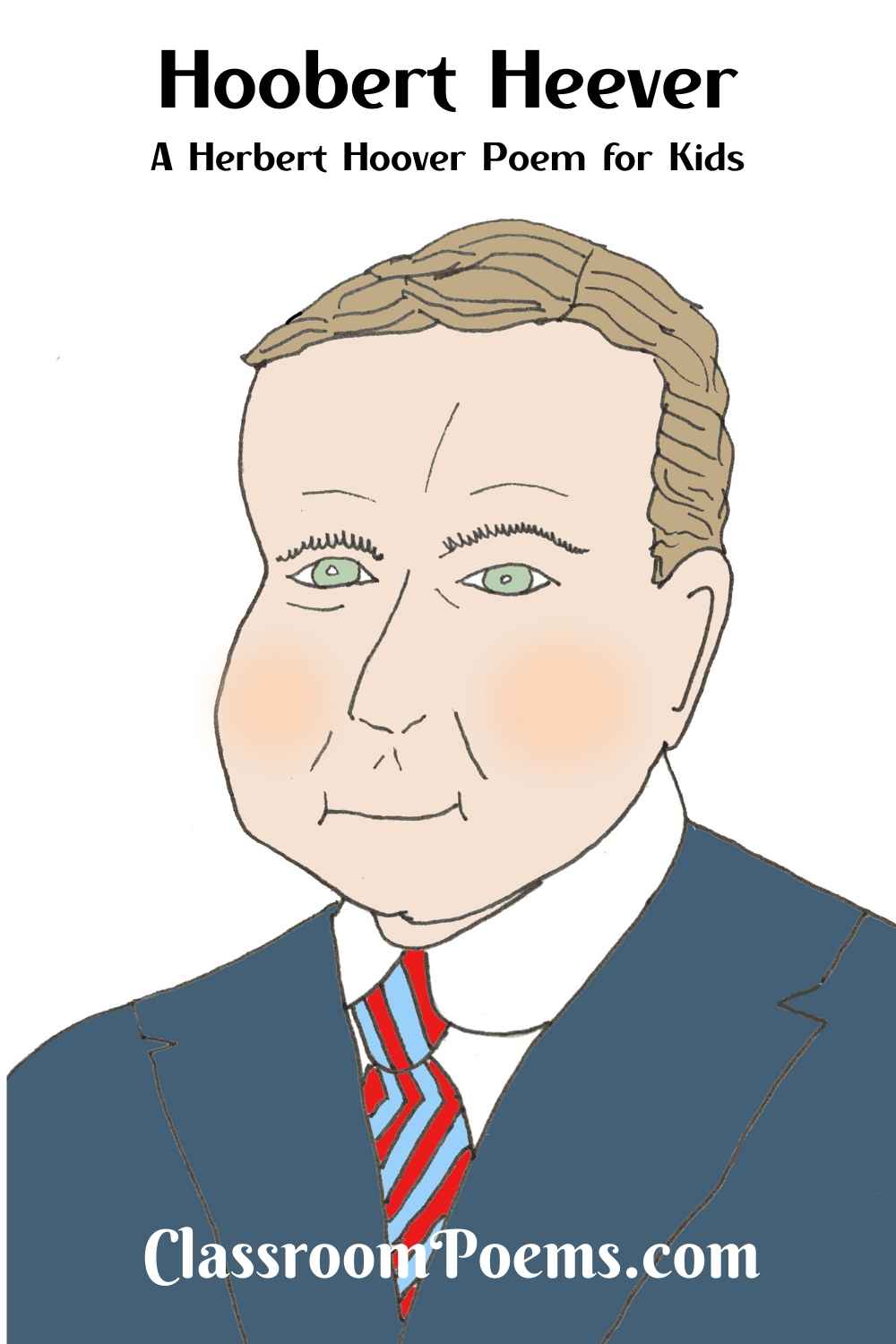 Once announced as "Hoobert Heever,"
Hoover was a great achiever.
Was a self-made millionaire,
lived his life with style and flair.
Popular with voting fans,
Hoover had majestic plans:
A country rich with goods and cash.
But then, there came the market crash.
As people lost each prize possession,
Losing to the Great Depression,
falling like a ton of bricks,
tough to miss and hard to fix.
Voters made a new selection;
Hoover lost the next election.
Like the nation, lost his perk --
now unemployed and out of work.

Facts about the Herbert Hoover Poem

Herbert Hoover was a self-made millionaire. He was a well-intentioned president that faced an unprecedented crisis -- the stock market crash of 1929. His goal was prosperity for all Americans. His plan was to build on that prosperity and erase poverty. But this did not work out. During Hoover's presidency, Harry von Zell, a young radio reporter, accidentally referred to the president as "Hoobert Heever" while reporting on the president's birthday on CBS radio. Despite Zell's shame at this blooper, he went on to enjoy a long broadcast career.

* Herbert Hoover was the son of a Quaker blacksmith in Iowa. He grew up in Oregon and later attended Stanford University, when it opened in 1891. He graduated as a mining engineer.

* Hoover married Lou Henry, a Stanford classmate. They immediately traveled to China where Hoover worked for a private corporation as China's leading engineer.

* In 1900, the Hoovers were in Tientsin, China, where they were trapped by the Boxer Rebellion. Under heavy fire, wife Lou worked in the hospital while Hoover directed the building of barricades and also risked his life rescuing Chinese children.

*After the US entered WWI, President Wilson appointed Hoover head of the Food Administration for the war effort. Hoover managed to keep food stores for the Allies while successfully avoiding rationing on the home front.

* After the Armistice (truce of WWI), as head of the American Relief Administration and member of the Supreme Economic Council, Hoover organized food shipments to help feed millions of starving people in central Europe, as well as some aid to Soviet Russia in 1921. While some criticized the Soviet aid, Hoover, a humanitarian, was outspoken about bringing relief to starving people no matter their political ideology.

* As Commerce Secretary to both Presidents Harding and Coolidge, Hoover became the Republican presidential nominee in 1928.

* Hoover was optimistic that the US was closer than ever to triumphing over poverty. Unfortunately, within months of his election, the stock market plummeted and the US fell into the Great Depression.

President Hoover and the Great Depression:
Facts to Support the Herbert Hoover Poem

* During the Great Depression, 5000 banks failed, wiping out the savings of some nine million Americans. One hundred thousand jobs were lost each week over the next three years!  This created a circular problem. People stopped buying and the economy continued its decline, and more jobs were lost. People lost their homes, and farmers were unable to make a living.

* By 1930, four million people were unemployed. By 1932, it was twelve million, and 25% of the country was out of work. There were soup lines for free soup, resorts became ghost towns, and America's trains ran empty.

* In an effort to keep jobs in the US, Hoover raised tariffs, his theory being this would increase the sale of US products. This unfortunately led to trade wars and the decline of US sales abroad.

* Hoovervilles sprang up. These were tent cities made of homeless unemployed citizens. There was a Bonus March of veterans who wanted their bonus pay early. They were turned away with bayonets.

* There was popular sentiment for the government to take action to improve the disastrous economy. While Hoover believed in individual responsibility and limited government, he did take action.

* Hoover presented Congress with a plan to create the Reconstruction Finance Corporation to aid business and farmers, as well as banking reform. Also included in the plan were loans to states for food for the unemployed, the expansion of public works, and drastic government economic cuts. This plan was opposed in Congress, and Hoover felt they did so for their own political gain, portraying him as an uncaring and cruel president. Hoover became the scapegoat of the Depression and was soundly defeated in 1932.

* During the 1930s, after his political defeat, Hoover criticized the New Deal, warning of a slide to statism.

* In 1947, Hoover was appointed by President Truman to head a commission to reorganize the Executive Departments. In 1953, President Eisenhower appointed him chairman of a similar commission.

* President Hoover wrote many articles and books after his presidency. in fact, he was in the process of writing a book when he died in New York City on October 20, 1964, at the age of 90.