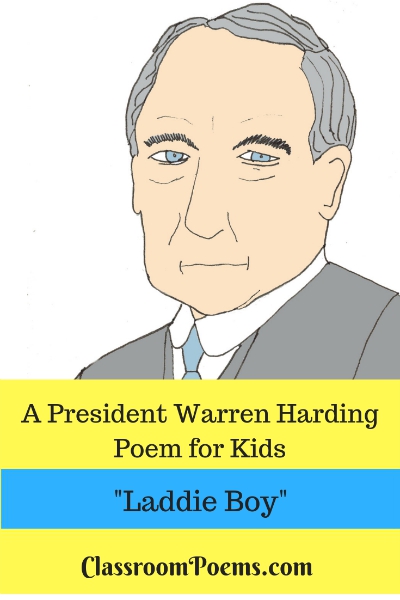 He had his own tastes and he had his own staff--
a valet to tend to his toilet and bath.
The cabinet members would give him a greeting;
he sat on his chair for each cabinet meeting.
The neighborhood canines would join to partake
each year for a slice of his dog-biscuit cake.
So loyal and faithful, a dog to commend;
Laddie Boy was Warren Harding's best friend.

About the President Warren Harding Poem

Warren Harding started out as a popular president. He won a landslide sixty-percent of the vote. But in terms of fame, he had stiff competition from his Airedale Terrier, Laddie-Boy. The nation was amused that Harding provided his pet with a seat during cabinet meetings. When Laddie-Boy was "interviewed" by the Washington Star, he gave his opinion on everything from Harding's administration and eight-hour work days for White House guard dogs --  to Woodrow Wilson's sheep.

In fact, Laddie Boy was so well-loved that the Roosevelt Newsboy Associated used 19,134 donated pennies and had them melted them down to create a sculpture of the dog's likeness. Laddie Boy posed for the sculptor some fifteen times. The statue resides in the Smithsonian Institution.

* Both of Warren Harding's parents, George and Phoebe, were doctors. He grew up in a small town with four sisters and a brother, and attended a one-room schoolhouse.

* At age fourteen he attended Ohio Central College where he edited the school newspaper and excelled in public speaking.

* After graduation in 1882, he taught at a country school and also sold insurance. Later, Harding and two friends bought the now-defunct Marion Daily Star newspaper.

* He married Florence Kling deWolfe, a wealthy divorcee who worked with him at the newspaper.

* He entered politics in 1898, winning a seat in the Ohio legislature, where he served two terms.

* Harding won election to the US Senate in 1914. He was a popular conservative Republican and an impressive speaker. He supported business interests and was for protective tariffs.  He was against Wilson's 14 Point Peace Plan.

* As Senator, he missed two-thirds of the votes, including the vote on Women's Suffrage (the right to vote), a policy he wholeheartedly supported. He was also a champion of civil liberties for African Americans.

* Harding won the Republican nomination and then the presidential bid in a landslide victory against Democrat James M. Cox and Cox's running mate, Franklin D. Roosevelt, in 1920.

* President Harding lost popularity when he quit the League of Nations, a now-defunct organization similar to today's United Nations.

* Harding signed the Budget and Accounting Act of 1921 which, among other things, established the General Accounting Office to audit government expenditures.

* Harding and his wife, Florence, lived the quintessential good life of the 1920s. They held elegant garden parties and state dinners. They entertained privately with stores of liquor, despite Harding's endorsement of Prohibition laws. He played poker with friends twice a week and also enjoyed golfing, yachting, and fishing.

* Like President Ulysses S. Grant, Harding was an honest man who could not control the dishonest people within his administration. During his abbreviated single term in office, some in his administration took bribes for lucrative oil deals in Wyoming and other western states. This corruption became known as the Teapot Dome scandal.

* In 1923, as rumors of corruption in the Harding administration implicated his friends in the White House, Harding and his wife, Florence, went on a national tour to communicate his policies and win back the trust of the American people. While they were out west, Harding suffered a heart attack, and died in San Francisco.

For more information about President Harding, go to Biography.com. If you enjoyed this President Warren Harding poem, please go to USPresidentsList.com for links to poems about other US presidents.