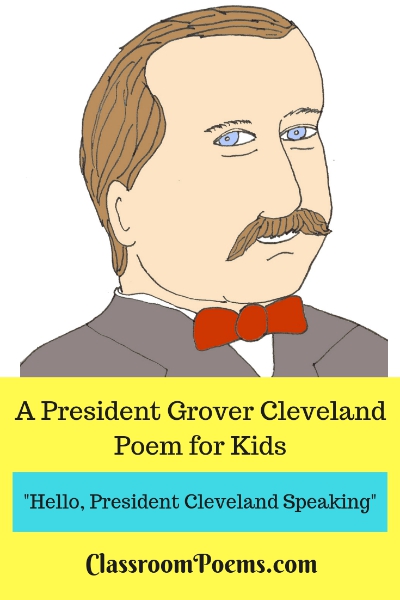 HELLO, PRESIDENT CLEVELAND SPEAKING
(a President Grover Cleveland Poem)
When Cleveland took office he worked on his own.
If you'd call the White House he'd answer the phone.
He spoke to the visitors, answered his mail
he did all his research and tended detail.
He was quite a worker, a regular grunt,
and yet had a temper, was terribly blunt.
He did not like handouts or government aid.
He did not want welfare-like funds to be paid.
If you disagreed with his vision at all,
then you'd phone the White House...
and he'd take your call.

And here is our second President Cleveland poem, Serving Twice. 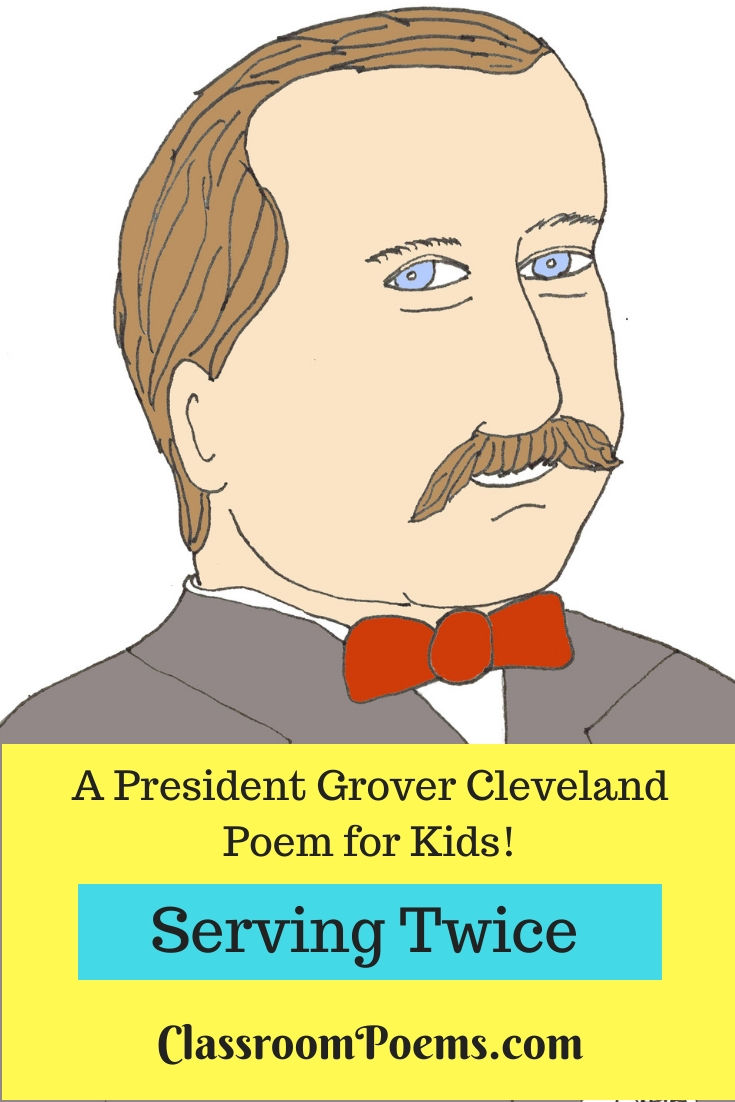 SERVING TWICE
(Another President Grover Cleveland Poem)
Grover Cleveland
found it nice
to be elected once,
then twice.
This was the first time,
(did you know?)
of serving twice --
not in a row.

There are two poems about president Grover Cleveland because he is a unique president. he served two terms...but not in a row. He is 22nd and 24th president of the United States. In 1885, Cleveland was nationally unknown. During his first term in office, he tried to do everything himself, including answering the phone. After he became more accustomed to his job, he shared some of his work with others in the White House. He lost his second election to Benjamin Harrison in 1888, but beat Harrison in the following election of 1892, and was president for one more term.

* Cleveland was the first Democrat president after the Civil War, and won only by a super thin margin.

* He is the only president in US history to serve two un-consecutive terms.

* Cleveland was elected mayor of Buffalo, New York, in 1881, and was Governor of New York from 1883-1885. He resigned this office to run for the presidency.

* A bachelor when he moved to the White House, Cleveland married twenty-one year-old Frances Folsum, when he was forty-nine. He was the first and only president to marry in a White House ceremony.

* Cleveland did not believe in government aid, and vetoed bills to help aid Civil War veterans.

* He lost his re-election bid with a majority of the popular votes, but with fewer electoral votes than his rival, Benjamin Harrison.

* Four years later, Cleveland won the election of 1892, winning the electoral college 277-145 in a second and successful bid for the presidency.

* Cleveland was not a big picture kind of guy. He concentrated on detail and did not like to delegate responsibility. (See poem #1, above.) He did, however, stop answering the phone, and did allow his staff to tend to day-to-day tasks.

* There was a depression during his second term, and his policies, particularly his desire to reduce tariffs, made him unpopular with both parties.