Please enjoy this George Washington poem, The Man Who Would be King, by Denise Rodgers. 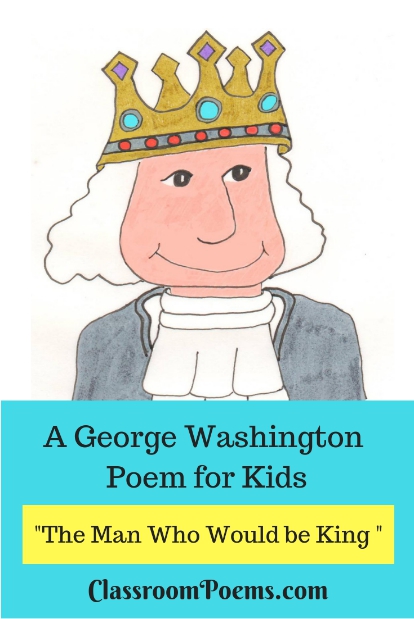 The Man Who Would be King
(A George Washington Poem)

But luckily, George Washington
Was such a modest guy
That he refused to be a king.
He wouldn’t even try.

Instead he was a president,
His power by election.
He truly was the people’s choice,
The number one selection.

This crazy new idea was
A quiet revolution.
A New World nation growing with
A vibrant Constitution.

And all because this modest man
Refused to do one thing.
The man that ruled our nation first
Refused to be its king.

Facts about the George Washington Poem

This poem celebrates the first president of the United States, who chose to leave office after two terms, rather than proclaiming himself king!  Had the first president of the United States chosen, instead, to remain in power, the history of North America, and the entire world, would quite likely be very different. There had, in fact, been some sentiment to make General Washington the first King George of the New World, during the Revolutionary War because he was a popular and powerful leader. For more information about this little-known fact, please read this article.

George Washington Early Life
He was born in 1732,  in Virginia, to a plantation family.

The Cherry Tree Incident
While there is a legend or story of young George Washington admitting to his father that he'd chopped down a cherry tree, there is no evidence to either prove or disprove that this is a genuine George Washington fact. We'd all like to think, however, that the first president and the father of our country was an honest person.

Young Gentleman
Washington was raised as an 18th century Virginia gentleman. As a young man, he was interested in military arts and the western expansion of the colonies.

Washington was a Lieutenant Colonel in 1755 and fought early battles that led to the French and Indian War.

Early Political Life
George Washington had been a state politician, serving in the Virginia House of Burgesses from 1759 to 1776. During that time, he also managed his Mount Vernon plantation. He was a slave owner, but did stipulate that his slaves be freed upon the death of himself and his wife.

A General and a President: Facts About the George Washington Poem

Becoming General Washington
Washington was one of the Virginia delegates to the Second Continental Congress in Philadelphia in 1775. It was there that he was elected Commander in Chief of the Continental Army.

Washington was a crafty military strategist. Knowing that his army was less equipped and ill-prepared for battle, he chose to not meet the British head on in the battlefield. Instead he chose to harass the enemy by falling back and striking unexpectedly.

In 1781, with the help of French allies, Washington forced the surrender of the British troops under Lieutenant General Charles Cornwallis, at Yorktown, Virginia.

A Reluctant President
George Washington was a reluctant president. His real desire was to return to his home in Mount Vernon. However, the new country wasn’t running smoothly after the war, under the Articles of Confederation. So Washington took part in the Constitutional Convention in Philadelphia in 1787. When the Constitution was ratified, the brand new Electoral College voted unanimously to make Washington president. He was the only president to enjoy this unanimous vote, twice!

Well-Deserved Retirement
When his second term was over, Washington returned home to Mount Vernon, where he lived another three years and died at age sixty-seven in 1799. His selfless service to the brand new country of the United States of America was truly instrumental in the establishment of a free society in the New World.