Enjoy this Abraham Lincoln poem, A Man for His Time, by Denise Rodgers. 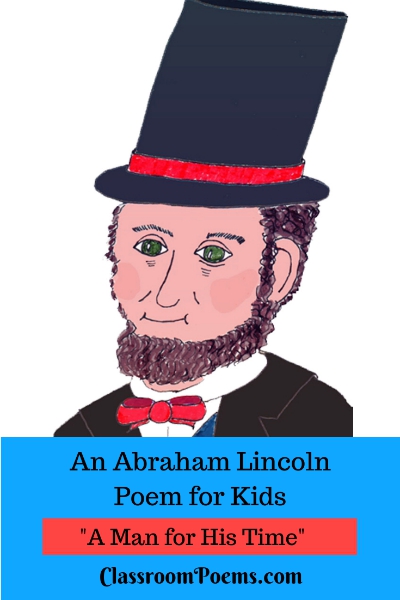 A Man for His Time:
(An Abraham Lincoln Poem)

A man for his time
for his age, for his place.
A man with a top hat,
a beard on his face.

He weathered the storm
with a country at war
torn from within
as had not been before.

He had the will, had the strength,
had the drive
to stick to his plan,
keep the union alive.

And when the war ended,
the fighting did cease.
Before he could work on
his plan for the peace

He went to the show.
As he sat with his wife,
a gunman’s lone shot
put an end to his life.

Another sad death
with no reason or rhyme,
the death of a man
of his age, of his time.

16th President of the United States

Facts about the Abraham Lincoln Poem

Abraham Lincoln was willing to go into battle to maintain the union of the states. In the four months between winning the election and his presidential inauguration, seven Southern states had seceded and formed the Confederate States of America. On January 1, 1863, Lincoln issued the Emancipation Proclamation that declared freedom for all slaves within the Confederacy. His main goal in the war, however, was to preserve the country as a union of states. The issue of slavery had divided the North and South for many years, and this was Lincoln’s grand effort to end this divide. His post-war plans were to be generous with the South and to encourage the nation to join together. Unfortunately, he was assassinated on April 14, 1865, before his plans could be put into action.

·         He was the first president to wear a beard in the White House. This became popular for succeeding presidents.

·         Political enemies called him “apelike” or “a well-meaning baboon.” Not exactly complimentary!

·         Legend has it he stashed documents in his top hat, as he was often disorganized (and the hat made for a very handy and portable storage container!)

·         He had a book of witticisms published. This is currently available as "The Wit and Wisdom of Abraham Lincoln," available from Dover Publications.

If you enjoyed this Abraham Lincoln poem, please return to our US Presidents List page for links to all the presidents. For more Abraham Lincoln facts, go to WhiteHouse.gov.