Please enjoy this George W Bush poem, The Cowboy from Harvard and Yale, by Denise Rodgers. 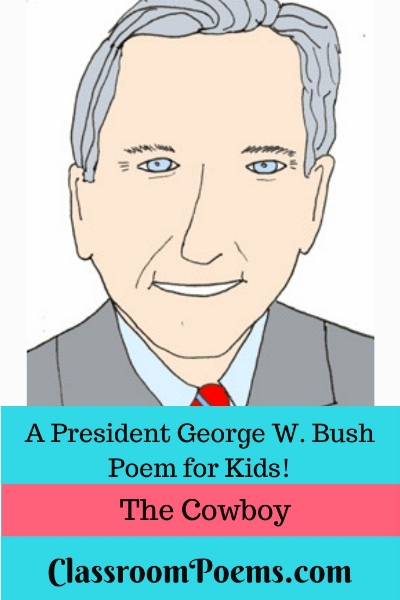 A cowboy straight from Texas,
yet from Harvard, and from Yale
who set his sights on Washington
determined not to fail.

It was a hard fought contest
and it ended in a tie.
And counting votes in Florida
became a "do or die."

But once he came to office
he dispatched thing on his mind.
He worked on education,
with his "no child left behind."

But then on 9/11
when the country was attacked,
this led us to Afghanistan
and then war on Iraq.

A president with backbone,
both a firm and stubborn man,
met terrorism in the eye
and made a fateful stand.

The presidential race between George W. Bush and Democratic nominee Al Gore  was so close that it created a legal battle in Florida. Ballots were counted again and again while the country waited to see who would be the new  president. The US Supreme Court ultimately ruled that the vote recounts should stop. This meant that George W. Bush was president. It didn't get easier after that. On September 11, 2001, Islamic fundamentalist terrorists hijacked passenger airplanes and attacked the World Trade Center in New York and the Pentagon in Washington, D.C. Nearly 3,000 people were killed and thousands more were injured that day. This led to a war in Afghanistan and later in Iraq. This was part of Bush's plan to fight terrorism around the world.

* George W. Bush was born July 6, 1946, in New Haven, Connecticut, the first child of George H.W. and Barbara Bush. His younger sister, Robin, died of leukemia before her fourth birthday. His other siblings include Jeb (John Ellis) Bush, Neil, Marvin, and Dorothy.

* Bush went to Sam Houston Elementary School in Midland, and later the private Kinkaid School when his family moved to Houston. Following his famous father's footsteps, he attended the exclusive Phillips Academy in Andover, Massachusetts for college prep. He followed in both his father's and grandfather's footsteps by then attending Yale for undergraduate studies.

* In 1968, during the conflict in Vietnam, Bush served in the National Guard and was stationed at Georgia's moody Air Force Base for pilot training.

* Bush earned an MBA at Harvard, planning to start a career in business. After graduation, he went to Midland, Texas, where the oil business was flourishing. He founded Arbusto Energy in 1977, and later Bush Exploration, which was later merged with another oil company.

* In 1989, Bush organized a group of investors to buy the Texas Rangers franchise. Not only did this give him great publicity and further name recognition, it also helped him hone his business skills. It also gave him experience working with government from a business perspective. It also didn't hurt that he sold the team for a $15 million profit in 1998.

* Bush met his future wife, Laura Welch, at a Midland, Texas, barbecue in July 1977. They obviously felt a mutual attraction as they were married just a few months later on November 5 of the same year.

* At the age of 31, Bush campaigned to represent his district in the US House of Representatives, and lost.

* In 1988, when his father decided to run for president on the Republican ticket, after eight years as vice president, the young George Bush moved to Washington over help manage the campaign. After his father won the presidency, Bush returned to Texas to work on his own career.

* It wasn't until his father left office in 1992 that George W. Bush starting working on his own political path. In 1993, he challenged Ann Richards, a popular Texas governor, and a Democrat. He focused on education, welfare and tort reform -- and surprised both Texas and the nation by winning an upset election.

* He won a landslide election for his second term as the governor of Texas, and this helped position him to run for the office of the presidency in the year 2000. The primary was not a slam-dunk, but Bush did prevail in the primary race against Senator John McCain of Arizona.

* The general election against Democrat nominee Al Gore was hard fought and had unfortunately ambiguous results. While Gore won the popular vote, Bush won the electoral. And even the electoral vote was in dispute. There was a recount of the Florida vote, and eventually there was a lawsuit brought to end the counting and recounting of the Florida election results. Bush won in a cloud of discontent on the Democrat side. This was one of the most controversial elections in US history.

* As president, Bush enacted his "compassionate conservative" philosophy by encouraging local organizations to help in their communities. He worked with Congress to pass the No Child Left Behind act in 2001. The law's intent was to raise national education standards. Critics were unhappy with the way it interfered with local control.

* Bush worked with Congress to enact tax cuts, but was only able to secure these cuts on a temporary basis.

* Under the Medicare Modernization Act of 2003, American seniors were extended prescription drug coverage, and health savings accounts were created.

* The economy started to fail during Bush's second term as housing prices plummeted and the stock market crashed. Add to that a great budget deficit, and the country slid into what became known as the Great Recession.

The 9/11 Attack:
Facts to Support the George W Bush Poem

* On September 11, 2001, the United States was attacked by al Qaeda, an Islamic terrorist group from the Middle East. Up to this point in time, terrorist groups were known to hijack planes and issue demands. But this al Qaeda group hijacked planes for the purpose of engaging in suicide attacks that would kill all on the passenger planes and also the people unfortunate enough to be in their target area.

* Two planes attacked the World Trade Center in New York, ultimately taking down the twin towers, along with all the people who were unable to escape. Another hijacked plane slammed into the Pentagon killing all the passengers as well as personnel inside the Pentagon.

* On September 14, just three days after the attack, President Bush visited the recovery efforts at the site of the World Trade Center in New York. He took a megaphone and spoke to the personnel at the site, saying, "I can hear you. The rest of the world hears you. And the people who knocked these buildings down will hear from all of us soon." The crowd cheered as people at the site, all across the US and around the world listened. Bush's approval ratings rose from 55% prior to the attack to 90% in the days following. This was the highest approval rating ever recorded for a US president!

* On October 7, 2001, the US and its NATO allies attacked Afghanistan in response to the 9/11 attack.Thousand of militants were killed or captured. The Taliban (a radical Islamic group that supported terrorism) and al Qaeda were forced into hiding in the mountains of Afghanistan.

* President Bush made combating terrorism the focus of US foreign policy.

* Security was tightened at airports, government buildings, and at sports stadiums and other large gathering venues.

* The Department of Homeland  Security was also established  with the mission of protecting the US and its citizens against terrorist attack.g/;

After the Presidency:
Facts to Support the George W Bush Poem

* George W Bush was only 62 at the end of his second term, when he left office. He and wife Laura returned to their Prairie Chapel Ranch in Crawford, Texas. For a time it appeared he enjoyed his time out of the limelight.

* The Bushes also purchase a home in Dallas and became active in the local community near Southern Methodist University where he was involved in the George W. Bush Institute and Presidential Library.

* Following the lead of Winston Churchill, one of Bush's historical heroes, Bush took up painting as a hobby, creating portraits of world figures he met while president. These paintings are exhibited in the Bush Center in Dallas and at other exhibits.

* George Bush also devotes time and energy to charitable causes, including fundraising for wounded veterans and those suffering from post traumatic stress. He wrote a biography about his father entitled 41. It was published in 2014.

More poems about the presidents...

If you enjoyed this George W Bush poem, please go to our US presidents page for links to poems about the other US presidents. For more information about George Bush, go to the Miller Center or Britannica.com.