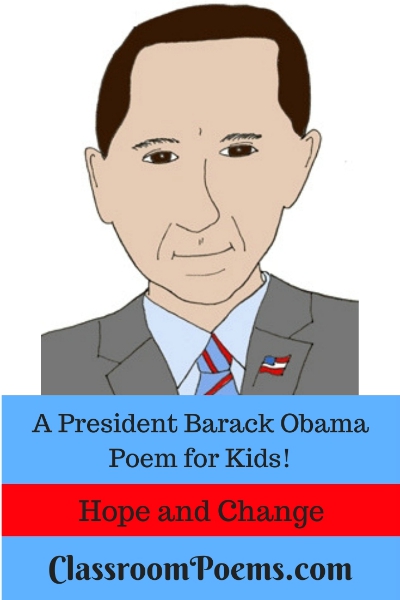 He was the man of Hope and Change,
A chance to mold and rearrange,
To make things fair for the common man –
Or woman – that was Obama’s plan.
To lower taxes for those without wealth
And create a fair plan for America’s health.
To regulate Wall Street and America’s banks,
To spread the wealth and then give thanks.
That was his plan for Change and Hope
And how he won the American vote.

Barack Hussein Obama was the first African American to serve as president of the United States. Hope & Change was the official slogan of his presidential campaign. Obama pledged to fundamentally change America to a place where ever person has a shot at the American dream. He was concerned about income inequality and also pledged to make health care affordable and available to all Americans.

The Early Years:
Facts to Support the Barack Obama Poem

* Barack Obama was born August 4, 1961 in Honolulu, Hawaii, making him the first president born outside the continental United States. His mother was a caucasian American originally from Kansas. His father, for whom he was named, was a Kenyan studying economics at the University of Hawaii, which is where he met Obama's mother.

* After his parents divorced, his mother remarried Lolo Soetoro, an Indonesian, and moved to Jakarta where she worked at the US embassy. In 1970, Obama returned to Hawaii to live with his maternal grandparents and attend an American school.

* Obama attended Occidental College in Los Angeles and later transferred to Columbia University in New York where he earned a degree in political science.

* He then applied to Harvard Law School and graduated in 1991. He was the first black president of the Harvard Law Review in 1990 when he was twenty-eight years old.

* Barack Obama won election to the Illinois State Senate from the South Side neighborhood where he'd worked as a community organizer. He was re-elected in 1998 and again in 2002.

* In 2004, a Republican US Senator from Illinois announced he would not run for a second term. Obama entered the Democratic primary race and won with fifty-two percent of the vote. In July of the same year, Obama gave the keynote speech at the Democratic National Convention in Boston, giving him national recognition. At this point, he was officially a rising star in the Democrat party. In November 2004, he won the US Senate seat with seventy percent of the vote.

* Obama announced his bid for the presidency on February 10, 2007. After a hard fought campaign against New York Senator (and former first lady) Hillary Clinton, he ran against Republican John McCain, a Senator from Arizona, and won.

* An historic turnout at polling stations throughout the country, particularly in large urban areas, brought on a decisive victory. Obama won the popular vote by a nearly 10 million margin, and won 365 electoral votes to McCain's 173. It was a new era in American politics.

The Economic Recession:
Facts to Support the Barack Obama Poem

* When Barack Obama took office in 2009, the country was in economic economic recession. The economy itself was not growing, the unemployment rate was closing in on ten percent, housing prices were dropping at alarming rates and home foreclosures were a common nightmare.

* What worked to President Obama's benefit when he first came into office was that both the Senate and the House of Representatives held a Democrat majority, making it easier to pass legislation.

* In an effort to save the failing auto industry Barack Obama added $60 billion to the Troubled Asset Relief Program (TARP) created by George W. Bush.These funds were given to General Motors and Chrysler in exchange for complying with government-mandated corporate reform. By the end of 2009, much of the TARP money (much of it allotted during the Bush administration) had been repaid. However, voters perceived TARP as a government bailout of wealthy corporations and banks.

* President Obama recommended that Congress create an $800-billion stimulus package. The purpose was to give state grants to prevent public employee layoffs, to enact middle-class tax cuts, and also to fund research and development of eco-friendly energy sources. This stimulus package passed Congress on a totally partisan Democrat vote.

* The economy did improve during Obama's tenure in office, albeit at a slow rate. During this time,11.3 million jobs were created and the unemployment rate fell to less than five percent, although critics claimed that those who gave up job searching left the market and were not counted. The annual federal budget deficit fell lower than $600 billion. While there was economic improvement, the rate of improvement was slow and the disparity in income between the wealthiest and average Americans grew.

* Like other Democratic president before him, Barack Obama was determined to enact American health care reform. But there was stiff opposition from the Republicans who viewed any reform as a slide into Socialism. Worse yet, his own Democrat party while in favor of reform, argued amongst themselves of the form it should take. The basic disagreement was between a public option/government-run option and the creation of a plan that would make private health insurance available to all Americans.

* The Democrats used the budget reconciliation process to push the Affordable Care Act through Congress without getting any Republican votes. While this was an efficient way to get the job done, there was unavoidable backlash. For years after the law passed, the Republicans repeatedly put up votes to repeal it. Barack Obama signed the act into law in late March 2010.

Other Domestic Reforms:
Facts to Support the Barack Obama Poem

* in 2010 Obama also worked with Congress to enact the Dodd-Frank Wall Street Reform and Consumer Protection Act. This was an effort to reform the banking an financial industry to prevent national economic free fall.

* In the 2010 midterm election, Republicans took over the House of Representatives making it more difficult or even impossible for President Obama to enact reform through Congress. While this hurt both politically and in most likelihood, personally, Obama prevailed at the next presidential election in 2012, securing a second term.

* It seems that the American electorate enjoys a split government. Despite winning his second term, the Democrats suffered heavy losses in the 2014 midterm election. Obama was now faced with both a Republican-dominated House and Senate.

* Barack Obama nominated two judges to the Supreme Court during his first term: Justice Sonia Sotomayor and Justice Elena Kagan. During his final year in office, Justice Antonin Scalia, a conservative Supreme Court justice, unexpectedly died. Republicans refused to consider President Obama's nominee to replace Justice Scalia, gambling that a Republican would win the next presidential election. It turned out that their gamble paid off when Republican Donald Trump won in 2016.

* Because of Republican control of the House and Senate in 2014, President Obama used his "pen and phone," as he called it, to create Executive Action without the need for Republican support. These Executive Actions included: The Climate Action Plan, an effort to reduce the nation's coal plant capacity; vetoing the 100-mile Keystone XL Pipeline that would have connected Canada's oil to the Gulf of Mexico; raising the minimum wage for federal contract workers to $10.10 per hour; requiring background checks for gun show purchases; banning discrimination by federal contractors on the basis of sexual orientation or gender identity.

* It was during his administration that a Supreme Court decision granted the right for same-sex couples to marry.

* Coming into office, President Obama inherited both the war in Iraq and in Afghanistan. One of his campaign promises was to withdraw American troops as soon as possible. By February 2009, he announced plans to reduce US troop deployment in Iraq, and at the same time made plans to increase US military presence in Afghanistan. His goal was to make Afghanistan capable of policing its own country, specifically keeping the Taliban and al Qaeda under control.

* On May 2, 2011, Osama bin Laden, the leader of al Qaeda and the mastermind behind the 911 attack on the United States in 2001, was killed by a team of Navy SEALS, under orders of President Obama.

* The nation was war weary and President Obama concentrated on a multi-national approach to the war in Afghanistan, and also on surgical air strikes and some Special Forces action , rather than on large-scale troop deployment. The lack of military presence  led to the disastrous attack on the US diplomatic compound in Benghazi, Libya in which four American government workers lost their lives.

* Despite promising to take action if Syria used chemical weapons against civilians in an ongoing civil war, Obama decided ultimately to take no action when the president of Syria did just that. He asked Congress for support in an air strike, but had lukewarm support. Instead, Obama took up Russian leader Vladimir Putin's offer to deal directly with Syria.

* During Obama's second term, an off-shoot of alQaeda call ISIS came into power. While he originally underestimated the potential of this new organization, calling them a "JV team," ISIS grew to be a ruthless and brutal army, taking over parts of Syria and later branching out to terrorist strikes in Europe.

* By 2015, President Obama signed an agreement with Iran with the intent of preventing Iranian nuclear weapons development for ten years -- in return for lifting United Nations economic sanctions that had ben crippling the country. Iran also agreed to surrender 97 percent of its enriched uranium.

* During his second term in office, President Obama restored diplomatic relations with Cuba, and visited the country in March of 2016.

* President Obama engaged in an agreement with China to reduce carbon emissions. This led tot he United Nations Climate Change Conference in Paris in 2015.

* Barack Obama left office at the relatively young age of fifty-five. Friends and other observers report that he and his wife, Michelle, have been enjoying their time out of the spotlight.

* Obama is spending time on his memoir and also focusing on his presidential library due to be built in the South Side of Chicago near the University of Chicago.

* Like other former presidents before him, President Obama gives both unpaid and paid speeches, sometimes earning as much as $400,000. His spokesperson suggests that the former president is true to his values, contributing programs to support Chicago's low-income youth.

If you enjoyed this Barack Obama poem, please go to our US Presidents page for links to poems about other US presidents. For more information about Barack Obama, go to MillerCenter.com.