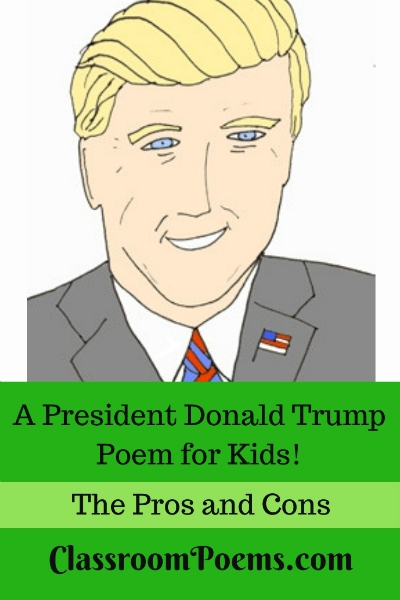 THE PROS AND CONS
A President Donald Trump Poem

Pro:
His promise: to make America great,
lower taxes, boost business
before it's too late.
Tough on Korea, we see he is able
to bring Kim Jong Un
to the bargaining table.
With the stockmarket high,
the economy's pie
getting bigger and booming,
the job market zooming.
All promises met.
The best president yet.

Con:
He's an oaf and a boor,
disregarding the poor.
Puts immigrants down.
Behaves like a clown
with non-stopping tweets,
his day not complete
unless nasty and mean,
creating a scene.
He likes to abuse
proclaiming "fake news,"
pointing out every "liar,"
or saying "you're fired!"
A man so uncouth!

Tell me, which is the truth?

Donald J. Trump stunned the nation by winning the 2016 presidential race against Democratic front runner -- and former Secretary of State, New York Senator, and First Lady -- Hillary Clinton. with zero public office or military service, He came to office as an upstart in the political world. Brash and unashamedly politically incorrect, Trump had been in the public eye as a successful billionaire builder and later as a celebrity TV host and entertainer. As of this writing, he has been both an effective and a polarizing president. He's worked hard to meet promises made on his campaign, but has also been brash and sometimes rude, lashing out at political detractors with personal attacks, usually delivered via Tweets.

* Donald John Trump was born June 14, 1946, to Fred and Mary Trump of Queens, New York. His father was a real estate developer and his mother, a Scottish immigrant, was a homemaker. He attended private school in Queens and was enrolled in the New York Military Academy from eighth grade through high school graduation.

* He then attended Fordham University in New York, and completed his undergraduate degree at the University of Pennsylvania's Wharton School of Business.

* Trump did not serve in the military during the Vietnam War, instead receiving four student  — and one medical — deferments.

* After graduating college, Trump went to work for his father in the real estate development business, and became president of the company in 1974. With a natural talent, he grew the business, opening luxury hotels and apartment, and later hotels and casinos.

* In 1977, Trump married Ivana Zelnickova, a Czech model with whom he had three children: Donald Jr., Ivanka, and Eric. They divorced in 1992, and  in 1993, Trump married across Marla Maples. They had a daughter, Tiffany. This marriage ended in 1999. In February 2005, Donald Trump married Melania Knauss, a Slovenian-born model. They had a son, Barron, in 2006.

* In 1987, his book, "The Art of the Deal," was published and shortly became a best seller, branding his persona and making him a media celebrity.

* By 1989, his net worth was $1.5 billion, according to Forbes, and he appeared on the cover of Time Magazine. This would be the first of over twenty-five times that his image would be on the Time Magazine cover.

The Entertainment Biz:
Facts to Support the Donald Trump Poem

* And then came "The Apprentice," Trump's reality show in 2004. On the show, contestants interviewed for jobs in one of the many companies in Trump's business empire. Viewers loved watching Trump tell contestants, "You're fired!" As the show drew big rating, Trump eventually earned $1 million per episode, and in the process became even more of a household name. The show eventually eventually spun off into a new show, "The Celebrity Apprentice."

* Trump also made cameo appearances in other TV shows and movies.

* Donald J. Trump is the first American president who held no public office before winning a presidential election. Instead his adult life was spent in the building and entertainment businesses. (See above.)

* While he was already a household name because of his book and TV shows, Trump gained political following in 2011 by questioning President Barack Obama's birthplace. There was a groundswell of interest and belief among certain opponents that Barack Obama was ineligible to be president if he'd been born in Kenya, rather than in Hawaii. This issue was eventually debunked by the Obama Administration release of birth records. However, being outspoken on this controversy did help Trump's social media presence with some supporters.

* Donald Trump announced his bid for the presidency at his New York Trump Tower in a speech in June 2015. He introduced a theme, "Make America Great Again," and some swag, including red baseball caps emblazoned with that theme.

* As his campaign progressed, other themes emerged. Trump was against political correctness,  illegal immigration, and government bureaucracy, which he called "the swamp." One of his rallying cries was to "drain the swamp" in Washington, meaning that he wanted to rid the nation's capital of corrupt unelected bureaucrats and lobbyists. He also promised to cut taxes and improve the economy using his business experience and talents. He vowed to create millions of jobs for out-of-work Americans by renegotiating international trade deals.

* Trump stood out from the field of sixteen other Republican primary contenders with his brash and politically incorrect style. This was a double-edged sword. While the media and cameras loved him, many voters were offended by his outspoken statements about illegal immigrants and other controversial issues. He responded to public criticism with personal attacks, which many, even in the Republican party, found offensive.

* Trump ran in the general election against Hillary Clinton, a former Secretary of State and senator from New York, as well as the former First Lady to President Bill Clinton. Hillary Clinton had more experience both in domestic and international affairs, and many people felt that she would be the obvious winner, especially against an outspoken and often offensive political novice such as Donald Trump.

* Almost all national polls predicted a Hillary Clinton win, as the election season came to a conclusion.

* In what was a stunning upset, especially to many Democrats who could not conceive that Clinton could lose to Trump, Trump did, in fact, win the 2016 election. While Clinton won the popular vote, Trump won the electoral votes by a decisive 306 to 232. Not only had he won the reliably Republican voting states, but also many swing states, including Florida, Ohio, and Michigan.

The Muller Investigation:
Facts to Support the Donald Trump Poem

* Shortly after the Trump Administration began, a special counsel was created to investigate Russian interference in the 2016 presidential election -- and more importantly, whether the Trump campaign colluded with the Russians in an attempt to tip the election in his favor.

* The investigation, led by Robert Muller, ran from May 2017 through March 2019. After nearly two years of investigations, thirty-four individuals and three companies were indicted. But in the end, Trump himself, as well as his campaign, was cleared of any collusion with the Russian government. There was also investigation into possible obstruction of justice charges against Trump himself, as well as his administration. Robert Muller concluded that there was not sufficient evidence to indict -- and also that it was not acceptable practice to indict a sitting president.

* Democrats in the House and Senate continue to investigate and talks of this investigation and possible impeachment are often in the news.

The Trump Administration:
Facts to Support the Donald Trump Poem

* At this writing, Donald Trump is in his third year in office, and the Democrat presidential primary race is in full swing, complete with national debates.

* During Trump's administration, more than five million jobs were created and the unemployment rate remains below four percent.

* Trump signed the Tax Cuts and Jobs Act in into law in 2017, in an effort to meet campaign promises.

* Also keeping campaign promises, Trump has his administration rolling back two regulations for every new regulation initiated. While some herald this as a business boon and the reason for a good economy and jobs creation, others criticize that this has led to problems with the environment and consumer protections.

* President Trump has made use of tariffs, most famously as an effort to get China to change its predatory trade policies, and also to get it to stop pirating intellectual property.

* Trump has encountered much pushback on his efforts to stem the flow of illegal immigrants into the United States. Opponents consider his stance racist. His rhetoric during the campaign was inflammatory. This has created a political rift in the country.

* One promise Trump has so far been unable to keep is his promise of a wall on the southern US border to prevent illegal immigration. There was much pushback to this concept, and Democrats blocked the appropriation of money to make this happen.

* All of ISIS, a rogue Islamic organization of brutal extremists who conquered much of  Iraq, in an effort to create a caliphate or nation, were defeated early in Trump's administration. Trump also announced  his plan to bring all troops home from Iraq.

* President Trump held an historic summit with Chairman Kim Jon-Un of North Korea. As of this writing, while there have been improvements, North Korea is still a rogue nation allied with China and Russia, despite Trump's efforts.

* President Trump famously declared Jerusalem the capital of Israel and moved the American embassy to this city. There was much protesting, especially in the Palestinian territories and in other Muslim countries in the Middle East.

Tweets and The Donald Trump Poem

Throughout the campaign and into his presidency, Donald Trump continues to put messages out on Twitter, quite independently of his staff. Many are current commentaries and position points. But when he is politically (or personally) attacked, Trump does not hesitate to use his Twitter account to punch right back, often with personal attacks and comments. This is unprecedented behavior for a US President, and many people find this offensive, whether they agree with him or not. That said, Donal Trump is a unique president and well liked by those who appreciate his plain-spoken manner. The United States has become more and more politically polarized, even before Donald Trump came into office. This great divide is now more pronounced than ever.

If you enjoyed this Donald Trump poem, please go to our US President List page for a links to poems about each and every president of the United States. Or if you prefer, scroll down for links to all the other 21st century presidents.

For more information about President Donald J. Trump, go to History.com or WhiteHouse.gov.