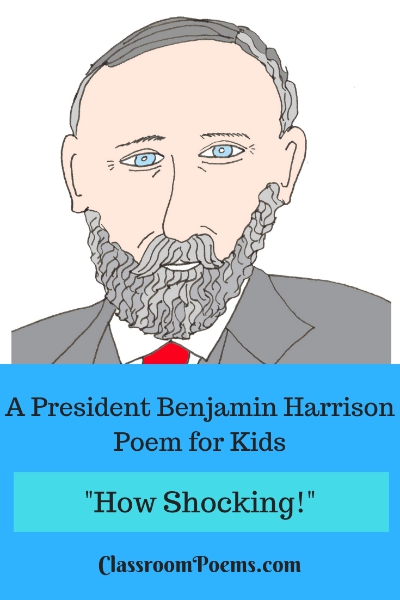 In late 1890, it was such a sight
when Harrison wired up the White House with light.
The workmen took four months to set and design
electrical lamplights to glow and to shine.

The first to "light up" on their Washington block,
his family was frightened of getting a shock.
Solution? A way to take charge of their fright?
The White House would glow with the lamps on all night.

Facts about the Benjamin Harrison Poem

Benjamin Harrison, grandson of President William Henry Harrison, is known for adding electricity to the White House in 1890. The technology was new, and Harrison and his wife, Caroline, were frightened of getting electrical shocks by touching the on-off switches. For this reason they either prevailed upon their servants to turn the lights off and on (because apparently the Harrison's were unconcerned about servants getting shocks), or alternatively, they would sometimes leave the electrical lights burning throughout the night.

* Benjamin Harrison was the last Civil War General to serve as president of the United States.

* He was the first and only president to hail from Indiana.

* Because he was only five feet, six inches tall, Democrat rivals dubbed him "Little Ben." Republicans responded that he was big enough to fill the shoes of his grandfather, Old Tippecanoe, William Henry Harrison.

* Harrison was very formal and uncomfortable in social settings, leaving some -- even his own White House staff -- to refer to him as a "human iceberg."

* Benjamin Harrison was the first and only president to lose an election against a former US president, Grover Cleveland.

* Benjamin Harrison was incorruptible. In his Inaugural address, he warned the large trusts, such as Standard Oil, to play by government rules of free trade or face government discipline. The trusts ignored him. In 1890, Congress passed the first antitrust legislation making it impossible for business to combine companies in order to monopolize an industry.

* With an eye to expanding US influence in Latin America and the Pacific, Harrison modernized the US Navy with increased ship building. It was also his goal to control the Isthmus of Panama with the desire of one day creating the Panama Canal.

* There was a boom in both Arizona and Nevada during the Harrison administration due to the discover of silver.

* A forward-thinking president, Harrison started the process of annexing Hawaii to the United States, but this was not completed during his administration. When he lost his re-election bid to Grover Cleveland, Cleveland withdrew the Hawaii request from the Senate.

* As president, Benjamin Harrison had dogs, horses, an opossum, as well as Old Whiskers, a goat who pulled his grandkids around in a cart.

* Formal in public, Harrison was seen dressed in top hat and frock coat, waving his cane while chasing after his goat, Old Whiskers, who'd charged out of White House grounds, with Harrison's grandchildren in tow.