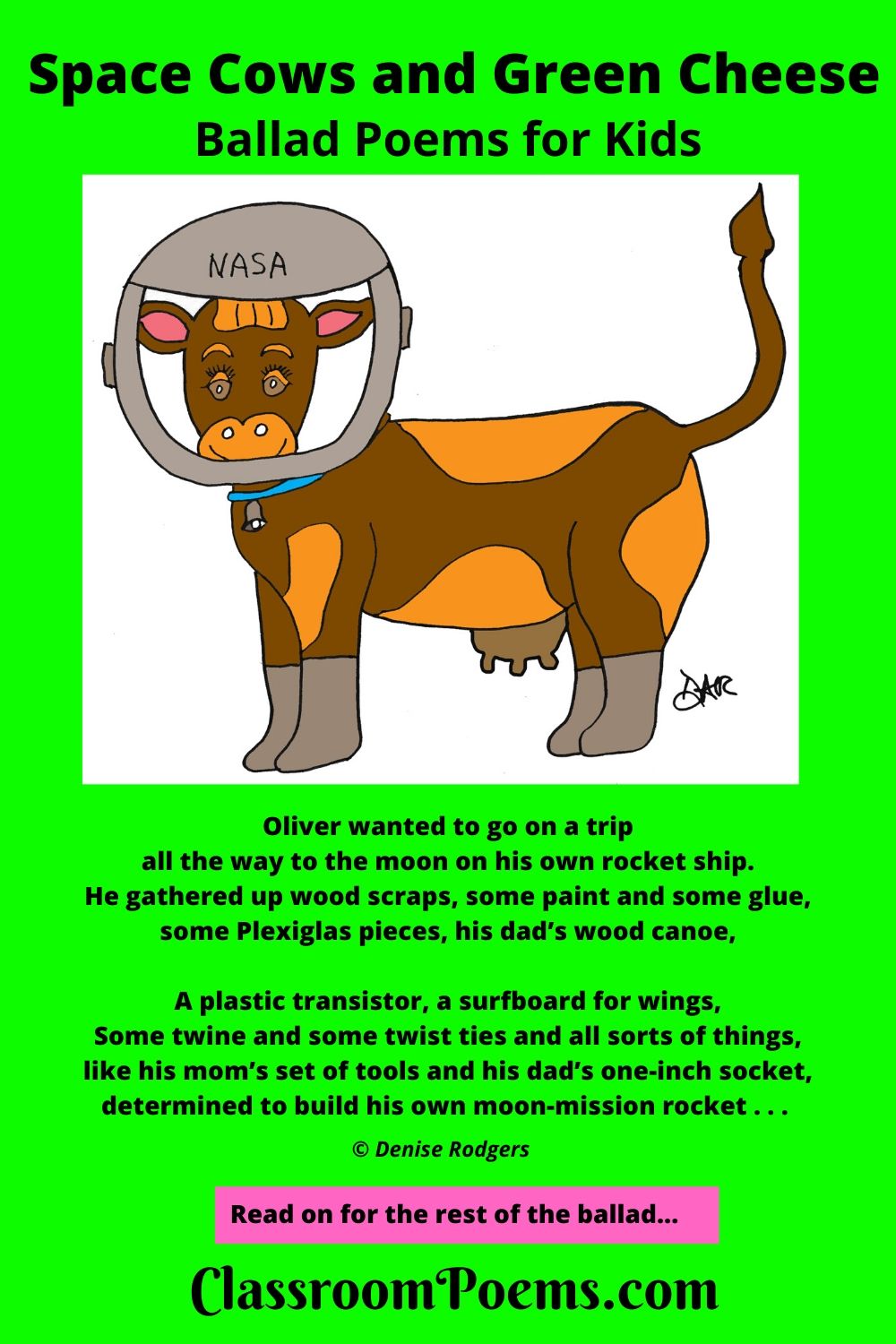 Space Cows and Green Cheese
Oliver wanted to go on a trip
all the way to the moon on his own rocket ship.
He gathered up wood scraps, some paint and some glue,
some Plexiglas pieces, his dad’s wood canoe,

A plastic transistor, a surfboard for wings,
Some twine and some twist ties and all sorts of things,
like his mom’s set of tools and his dad’s one-inch socket,
determined to build his own moon-mission rocket.

When Oliver showed both his parents his ship
he hugged them good-by and set off on his trip.
“Please be home by dinner,” said mom, the gourmet,
“Tonight I am making a Swiss cheese soufflé.”

Oliver’s moon rocket sputtered and roared.
It grumbled and rumbled and started to soar.
Oliver smiled and waved one last good-by
as his moon rocket blasted straight up to the sky.

Oliver hurtled and zoomed toward the moon,
determined to reach it before half past noon.
As he came upon it and slowed up his motor,
he noticed the moon had a cheesy-like odor.

The lunar sky darkened, a dismal, black freeze,
as his moon rocket crashed in a crater of cheese.
A man on the moon, kind of short, sort of stout,
was friendly and tried to help Oliver out.

He held out a hand to help Ollie step down,
and said, “Come with me, and I’ll show you our town.”
The moon town was hopping and Ollie said, “Wow!
It’s awfully pretty, but it smells like cow.”

They were grazing and mooing and walking with bells,
and because they were cows, they were making cow smells.
The man on the moon bowed his head and said, “Please,
will you be my guest in the Building of Cheese?”

The building was mammoth, and filled with huge vats.
The moon mice wore helmets and so did the cats.
Milk poured pipes into tubs, engines whirring
while cheese workers stood by the vats, slowly stirring.

The cheese in one section was Cheddar and Brie.
The room stretched out farther than Ollie could see.
The moon man was beaming. “We’ve Monterey Jack,
and Blue Cheese and Green Cheese and Brown Cheese and Black.

We have fresh Provolone. We have Gouda and Feta.
Here, try a sample, you’ll never taste better.”
Oliver found the cheese awfully tasty
although it was bright green, and just a bit pasty.

“We make Mozzarella, and what did I miss?
We make Camembert, Colby, and Cheddar and Swiss.”
Oliver gasped, “Oh! My mom’s Swiss soufflé.
I have to go home — and I mean right away!”

The moon man said, “Ollie, you’re not in a muddle.
Here is a ticket. Jet home in our shuttle.
We’ve shuttles to Venus and also to Mars,
to all the nine planets and most distant stars.

"And just one more thing . . .”
Ollie asked, “Yes, what is it?”
“This pass is forever. So come back and visit!”
The shuttle was large, like a big metro bus.
Oliver bucked his belt with no fuss.

The shuttle took off with a rumbling blast.
Ollie could tell it went terribly fast.
A half hour passed. Ollie found to his shock
that the shuttle touched down half a mile from his block.

His parents were happy and gave him a hug.
They asked, “How’s the moon?”
Ollie said with a shrug,
“I brought you a present.” He handed them cheese,
the neon-green brand, “Taste a little bit please.”

They thought it the best they had tasted by far.
Ollie told them the cheese was the favorite on Mars.
He told them about all cows and the cheese
and the craters all loaded at least to his knees,

The cheese that is made on the side that is dark
and the man on the moon and his every remark,
and the cows with their helmets and boots made of lead,
(So they’d walk on the ground and not float up instead),

How the shuttle trip home zoomed incredibly fast
how happy he was to be back home at last.
His dad said, “I’m happy. You’ve no need to roam.
You’ve been to the moon. Now, you’ll stay here at home.”

Ollie looked up from his Swiss cheese soufflé.
“Gee, Mom. Gee, Dad, I don’t know what to say.
There are eight other planets and farther out stars.
Next weekend I’m planning to shuttle to Mars.

His mom heaved a sigh and his dad heaved one too.
“If that’s what you want, dear, then that’s what you’ll do.”
His mom brightened up, and said, “Son, you’re a winner.
You may visit Mars, but you get home by dinner!”

Space Cows and Green Cheese is a creation from many years ago when I was writing what I hoped would become picture books. Picture book or not, Space Cows is definitely a ballad; it tells a story from start to finish. Believe it or not, this poem was greatly reduced in size during the editing process. (Yes, it used to be longer.)  But on to the next example of ballad poetry. 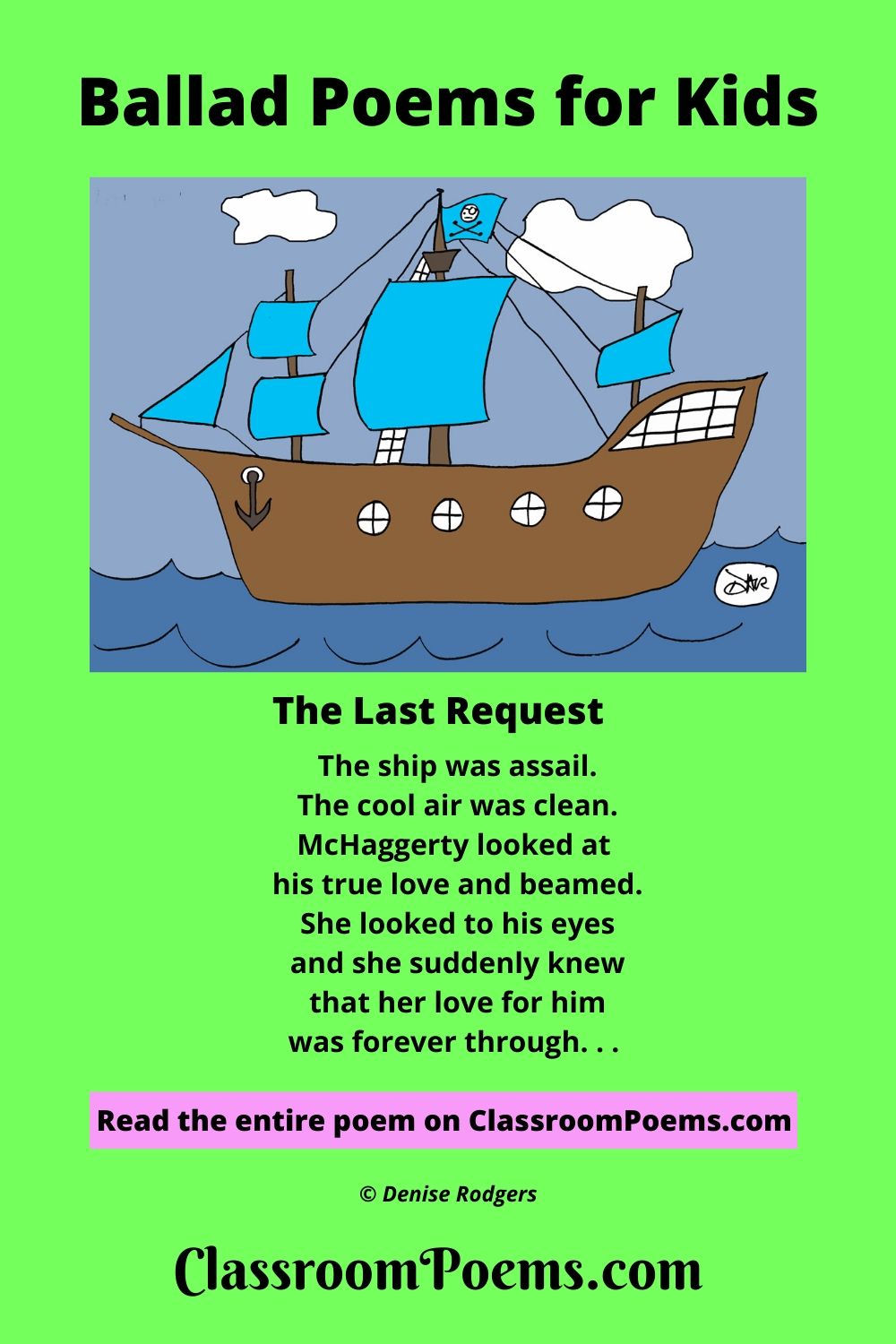 The Last Request
The ship was assail.
The cool air was clean.
McHaggerty looked at his true love
and beamed.

She looked to his eyes
and she suddenly knew
that her love for him
was forever through.

She gazed at the captain,
out, steering above.
It was only for him
that her heart gave out love.

When Mc Haggerty noticed
her look, he felt pain.
"I must get her
loving me well once again!"

He challenged the captain
to a sword's duel.
The winner the maiden's
loving would rule.

Ah, but the captain
with the sword was a man!
With one sweeping slash
knocked the sword from his hand.

McHaggerty's hope
was thoroughly gone.
The captain ordered him
murdered at dawn.

The night passed quite quickly.
The sun cast its rays.
Yes, Thomas McHaggerty
would die today.

"Do I have one request
before I die?"
He looked at the captain
who then said, "Aye."

He lifted his hand
to wave goodbye,
and slugged his true love
in the eye.

If you prefer tragedy, here is the alternative ending:

He lifted his hand
to wipe his eye,
and sadly kissed
his true love goodbye.

The Last Request is an original that I wrote sometime in the early 70s, after being influenced by a book, Poems that Live Forever. It's a hardcover book, filled with ballad poems and ballad poetry, that still sits on my bookshelf. The cost on the book flap is $4.95, giving you a clue about how old this book is. (It kind of dates me as well!)

This ballad poem is either tragic or humorous, depending on which stanza you care to end it with. Even in the 70s, I wrote two choices for the end. Today I choose humor. I guess that I've become less and less sophisticated with age. : ) But I've included the alternative end, in case you prefer an example of tragic ballad poetry.

Ballad poetry tells a story in rhyme. While many sophisticates have disdain for rhyme, they probably have enjoyed a few ballad poems in their time. It turns out that rhyme is a mainstay of the human condition. Translation: we love rhymes! We love them as children, and as human beings of any age. We enjoy the satisfaction of a good story told to a well-turned rhyme, and that is exactly what a ballad poem is!

The History of Ballad Poetry

In the Middle Ages, wandering Minstrels (singing poets), traveled through Europe, performing their stories and songs at castles and villages. The ballads were generally composed of four-line stanzas, the way both ballads on this page were written.

By now you probably have the idea that ballads are poems or songs that tell a story in rhyme. If you'd like to write  one of your own, my suggestion to you would be to start with the story BEFORE you attempt to commit it to verse. If you let the rhyme take control of your ballad poem, you will soon be unfamiliar with the story that comes out the end of your pencil (or through your keyboard).

It might take some time, but it's worth the effort. Don't stop working on it until you've completed a piece of ballad poetry you can call your own. And don't forget to share your creation with others. They will generally get a real kick out of it. (At least that's been my experience.) Happy writing!!!

Even more pages about writing poems...

Go from Ballads to Similes